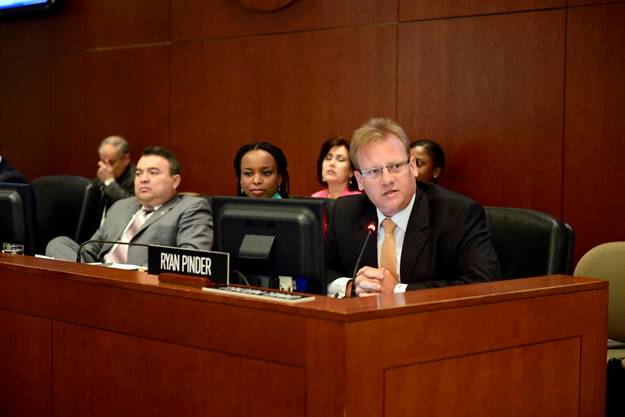 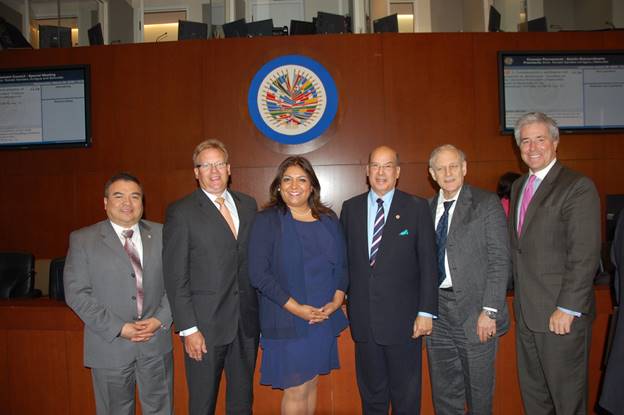 WASHINGTON, D.C. – Former Bahamas Financial Services Minister Ryan Pinder was one of three experts who spoke on the topic “Finance and Banking Services Challenges to Development in the Americas” at a special meeting of the Permanent Council of the Organization of American States (OAS) on Wednesday, March 30, 2016, in the Simon Bolivar Hall at OAS headquarters, 17th Street and Constitution Avenue, N.W.

The importance of the special meeting was highlighted by Sir Ronald Sanders, Chair of the Permanent Council and Ambassador of Antigua and Barbuda, who noted that Caribbean and Central American states “have recently been subject to worrying developments directly affecting their financial services sector that pose a threat to their economic growth and political stability.”

Mr. Pinder is the Member of Parliament for the Elisabeth Constituency in New Providence and is currently a partner in the Bahamian law firm Graham Thompson. He was joined on the panel of experts by Bruce Zagaris of the firm Berliner, Corcoran & Rowe, and Daniel J. Mitchell, a senior fellow at the Cato Institute.

“This despite the Caribbean region having undertaking every necessary effort to comply with FATF requirements to combat money laundering and terrorist financing, and implementing OECD requirements with respect to transparency of information, and ultimately compliance by the countries of the Caribbean region with the US transparency initiative FATCA,” Mr. Pinder said.

“De-risking is the contraction or termination of banking or financial services in the region as a result of a concern that a customer or partner in that particular region, in this instance the Caribbean region, could pose a higher than average risk for money laundering or terrorism financing, or that the cost-benefit of providing the services does not justify the risk. This is happening throughout the Caribbean, and frequently the economic reasons for de-risking are directly connected to the regulatory and compliance reasons and costs.”

“This is a dramatic contraction in the regional financial services industry,” Mr. Pinder said. “The policy of de-risking has the potential to wreak severe damage on Caribbean economies… We are already beginning to see its effects “

Elaborating on this claim, Mr. Pinder said, “Financial services provide the lifeblood of an economy, and especially in the Caribbean. Ensuring correspondent banking is key to the region’s key financial indicators, including trade finance, foreign direct investment, tourism, international financial services and remittances. As the World Bank has stated, ‘financial inclusion is a key enabler for reducing poverty and boosting prosperity.’

“While international financial institutions have been working together to increase financial inclusion, de-risking and the consequent withdrawal of banking services risks only taking us backwards and alienating Caribbean economies region from international commerce. This would have irreversible effects on the economic welfare of our people. Not only are there clear economic retrenchment as a result, but this entire retraction in financial services will drive transactions and currency flows to less transparent and more risky alternatives.”

Declaring that remittances are “a key component in economic development,” Mr. Pinder added, “Remittances are usually conducted by international wire transfers, cash management services, and check clearing and settlement, areas directly affected by the withdrawal of correspondent banking and de-risking. Studies have found strong relationships between remittances and economic development: a 10 percent increase in per capita official international remittances yields a 3.5 percent decline in the share of people living in poverty. In the Caribbean more than $10 billion a year are in remittances, primarily from countries where we see the most significant retraction, the US, UK, and Canada.

“We know that the Caribbean region depends on inbound trade from the US, and without correspondent banking services, this is not only put at risk, but could be eliminated. The region also depends heavily on tourism and foreign direct investment. Both economic platforms for the Caribbean are directly dependent on effective correspondent banking, not only with US institutions, but the EU, UK and Canada. This is a global issue, not only isolated to the US.

“The effect on the international financial services industry is paramount. This is an industry that in my country, The Bahamas, has single handedly created the middle class, elevating much of our population from poverty and creating an internationally well regarded and educated professional class. We have recently seen a shift in the industry away from global multi-national banking institutions and to private banking and professional services institutions, allow for Bahamian entrepreneurs to participate in this once exclusively foreign owned industry. The threat of loss of correspondent banking relationships to these independent institutions is creating an elevated level of difficulty, cost, and in some instances, closure of business lines for our institutions, directly affecting an element of our economy, the second contributor to GDP, and a lifeline industry for the economic welfare of our people.”

“Initiatives by the CARICOM region include:

Recent visit by Prime Minister Dean Barrow of Belize to Washington to meet with Senior Officials of the United States Government and with U.S. banking monitors following the announced exit of Bank of American from Belize.

Formation of a Committee of Ministers of Finance on correspondent banking chaired by Antigua and Barbuda’s Prime Minister Gaston Brown. The mandate is to represent CARICOM’s interest at all levels, including the UN, WTO and US Congress. This Committee is supported by:

Committee of Central Bank Governors
Caribbean Association of Banks
Caribbean Financial Action Task Force
Plan of Action with specific initiatives presented to CARICOM Head of Government
Statement on De-Risking and Correspondent Banking delivered by Jamaica on behalf of the Caribbean Community to the WTO Committee on Trade in Financial Services.”

Asserting that the initiatives of the Caribbean region to date “have been good but also largely diplomatic in nature,” Mr. Pinder added, “The loss of correspondent banking and de-risking is a difficult and complex issue that spans beyond diplomacy. Specific initiatives must be not only developed but tested or viability and then the viable alternatives advanced with the public sector, private sector and regulatory bodies internationally in agreement.”

The former Bahamas Financial Services Minister pointed out that “many constituent parties — including the World Bank, The Caribbean Policy Research Institute, and even the policy makers of CARICOM — have all given their suggestions as to the way forward and recommendations as to preserving correspondent banking in the region.”

“Some recommendations attempt to address the economic challenges, while others attempt to provide an objective framework for a transparent and predictable risk based regulatory framework.” Mr. Pinder said. “While all interesting ideas, it is my belief that they all are not equally viable.”

He added, “For example, the regional political leaders have expressed an interest in forming a regional US banking institution to provide regional banking services, consolidating the financial transactions of the region. This might not be the best option as it requires extensive regulatory approvals, and there is no guarantee that the US bank itself would not require a correspondent banking relationship to handle the volume of transactions. The correspondent bank would have risk concerns about the multiple layers of banking institutions providing services to the ultimate client.

“I believe that the OAS as a collective, multilateral policy body should look to formulate recommendations for standardization and internationally acceptable regulation based on objective risk based frameworks. Some examples for a transparent multilateral regulatory framework would include:

“Know your customer’s customer – correspondent banks claim that they as a matter of policy, even if not a matter of law, require them to know the customer of their customer, in other words know on whose behalf the transactions are being conducted for. This is a concern because not only is it a matter of law, it is a reflection of the lack of confidence in the region as a whole. Standard international regulations on this issue, and related inconsistent regulatory matters would provide a level playing field as to the regulatory metrics.

“Delayed timeframes for exiting of correspondent banking – longer notice periods; transparent reasons for why the correspondent bank is severing its relationship; a prescribed framework for the exit. Currently the Caribbean region and their banks are given only a short period of time to find a replacement correspondent bank, if one can be found, and are not necessarily informed on why the bank is exiting. This does not allow the region to address the underlying reasons creating the perception of high risk.

“Preparation of guidelines and internationally accepted policies on anti-money laundering applications such that an entire country is not affected by one misstep by one institution. Transparent country ratings so one bad apple does not affect the bunch. As an example, in one instance, where one bank had an adverse finding the correspondent bank not only severed relations with that institution, it pulled out of the entire country. This has extended to the entire Caribbean where institutions are abandoning the region because of a perception that might have been created by an experience with one institution in one country.

“This is a complex problem and requires input and coordination on a variety of levels. A framework and solution can be found. If we can lessen the regulatory cost and burden, clarify the penalty structure for correspondent banking through transparency and rule making and support solutions through technical viability and regulatory acceptance, we can preserve the long standing history of banking in the Caribbean region; we can preserve the economic viability for my children. It is through the leadership and concerted focus of institutions such as the OAS that is required.”

CAPTION ONE
Ryan Pinder (right), former Bahamas Financial Services Minister and Member of Parliament for the Elisabeth Constituency in New Providence, addressing a special meeting of the Permanent Council of the OAS on Wednesday, March 30, 2016. Also pictured from left are: OAS Assistant Secretary General Nestor Mendez and Ms. La Celia A. Prince, Chief of Staff to the OAS Assistant Secretary General. (Photo by Juan Manuel Herrera/OAS).