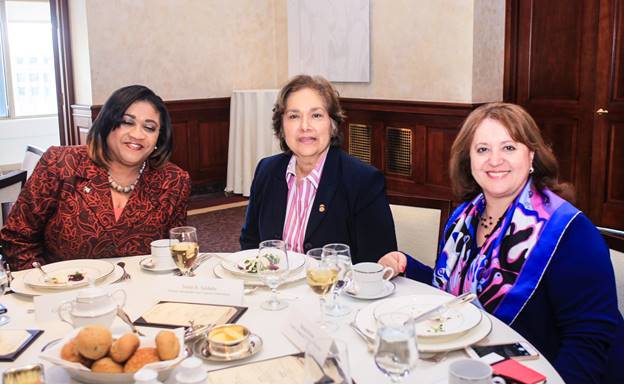 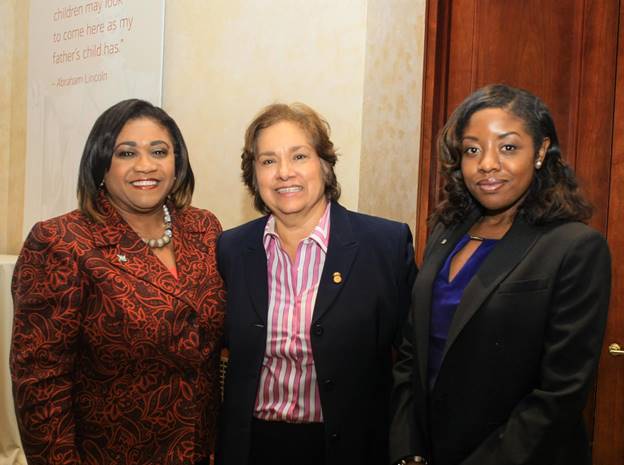 WASHINGTON, D.C. — Director of U.S. Immigration and Customs Enforcement (ICE) Sarah R. Saldana was the guest speaker at a luncheon held by the Consular Corps College, a national association for foreign consuls in the United States of America, on Thursday, March 24, 2016. Mrs.  Paulette Zonicle, Bahamas Consul General to Washington, DC, is Dean of the Consular Corps College, and she used the opportunity to speak with the Director one-on-one to discuss pertinent issues. Director Saldana leads the largest investigative agency within the Department of Homeland Security and manages a budget of approximately $6 billion with nearly 20,000 employees in 400 offices in all 50 U.S. states and 48 countries, including The Bahamas. Pictured from left to right in photo number one are Consul General Zonicle, Ms. Saldana, and Ms. Janine A. Gibson, Vice Consul, Bahamas Embassy Consular Annex. In photo number two from left are: Consul General Zonicle, Ms. Saldana, and Ms. Daniela Kristo Nesho, Head of the Consular Office, Embassy of Albania. 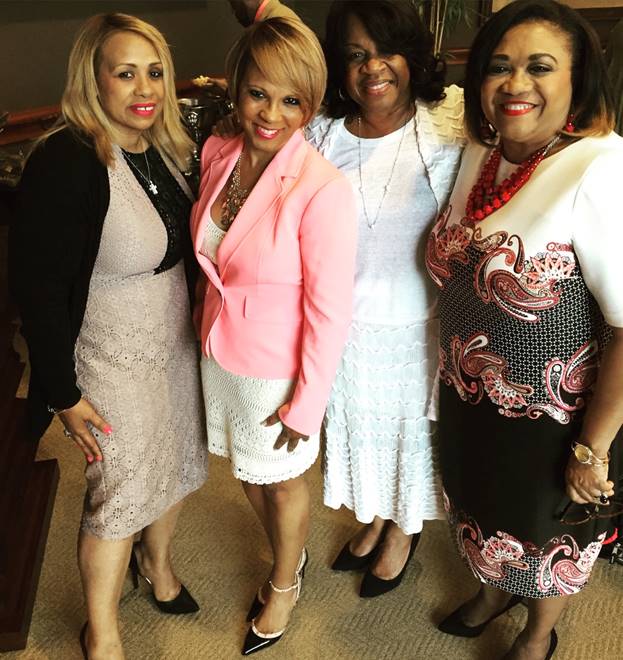 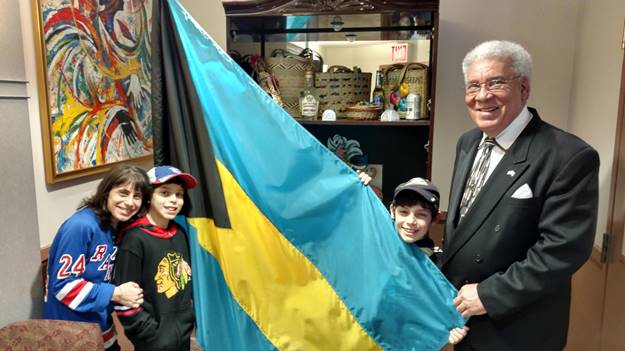 NEW YORK — As part of a school project to earn extra credits, Daniel Prensky, 13, a student at Park East Day School, located at 164 East 68 Street, New York City, was given an assignment to learn all he could about the Commonwealth of the Bahamas and its Flag. Accompanied by his mother, Mrs. Eileen Prensky, and his 10-year-old sibling Yoni Prensky, the enterprising young student paid a courtesy call on the Hon. Forrester J Carroll, Bahamas Consul General to New York, at Bahamas House, 231 East 46th. Street on Thursday, March 24, 2016. Pictured from left with Consul General Carroll are Mrs. Prensky, Yoni Prensky, and Daniel (partially hidden behind the flag). 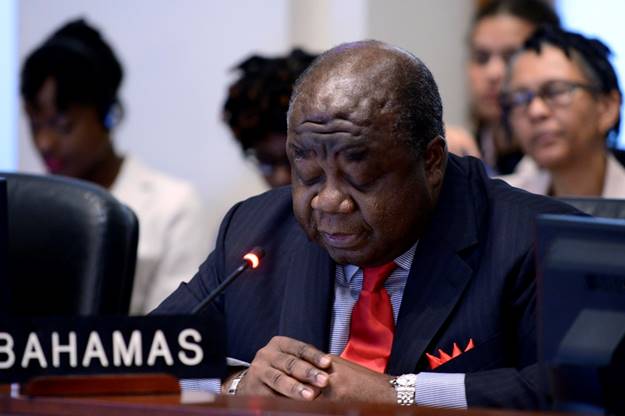 WASHINGTON, D.C. — His Excellency Dr. Elliston Rahming, Bahamas Ambassador to the United Nations and the Organization of American States (OAS), delivered The Bahamas statement on Banking and Financial Services Challenges in the Americas at the special meeting of the Permanent Council of the OAS held to address that issue on Wednesday, March 30, 2016, in the Simon Bolivar Hall at OAS headquarters, 17th Street and Constitution Avenue, N.W.

Beginning his remarks by declaring that The Bahamas’ “delegation stands in solidarity with the statement delivered on behalf of CARICOM,” Ambassador Rahming also extended thanks to Permanent Council Chairman Sir Ronald Sanders “for convening this important meeting today to facilitate engagement, here in this hemispheric forum, on issues that present real challenges to the integral development of many Member States.”

He also extended “a special welcome to my fellow countrymen” Mr. Ryan Pinder, Member of Parliament and former Minister of Financial Services, and Sir Michael Barnett, former Attorney General and Chief Justice of The Supreme Court of The Bahamas, who was at the meeting as a guest of Mr. Pinder, one of the three financial experts who spoke on the topic, “Finance and Banking Services Challenges to Development in the Americas.”

Dr. Rahming said the primary banking and financial services challenges The Bahamas faces “relate to assertions which undermine the legitimacy of my country’s financial services sector and policies that limit many developing Countries, like mine, from access to development financing.:

“We hope that the conversation today will dispel myths regarding indicators of economic development and move the hemisphere closer towards a uniform and level playing field we expect in the field of financial services,” Dr. Rahming said.

He added: “The Bahamas is a well-established, well-regulated and fully compliant financial jurisdiction and yet we, alongside many colleague Members here, continue to face a seeming cascade of arbitrary and spurious designations as a ‘tax haven’. The recent ‘tax haven’ labeling initiatives across the United States seem to have caused reputational damages to our jurisdictions, as opposed to reaching its intended objective of enhancing State tax revenues.

“Despite these efforts, the ongoing designation of The Bahamas, as a tax haven, particularly across several US States, seems to be a peculiar instance of dissonance between US federal and state levels of government, which is particularly troubling in light of the unprecedented work that we have done and continue to do to be fully compliant with United States and OECD tax authorities requirements.”

Continuing, Dr. Rahming said, “We hope that today’s conversation will reinforce the need for an inclusive, participatory and broad-based dialogue on international cooperation in tax matters in the hemisphere and the need to move towards the uniform and level playing field in the Americas that we all desire.

“My delegation also hopes that this organization will also provide a forum for further consideration of matters related to the need for evolution in the lending criteria used by International Financial Institutions. The criteria used generally by International Financial Institution’s (IFI’s) to determine access to capital and concessions are fundamentally flawed. Conceptually, denying access to concessional resources is not supposed be an automatic consequence of reaching a particular income level, but rather, it is supposed to be a formal determination based on an assessment of whether the country has reached a level of development, including having institutional capacity, and capital-market access that enables a Country to sustain its own development process without recourse to IFI funding.

“In practice, however, these metrics are harder to measure and the dependence on GNI per capita, as it is an easily identifiable statistic, leads to instances of misinterpretation of a Country’s economic circumstances and premature graduation. This occurs because GNI per capita is a crude tool, which does not account for income distribution or the special vulnerabilities of Small Island Developing States, of which most CARICOM countries would be included. In order to ensure that International Financial Institutions do not hinder, as opposed to facilitate development, formal recognition of the special circumstances of Small Island Development States (SIDS) and acceptance of a common but differentiated responsibility policy towards SIDS is necessary.”

Dr. Rahming said it is “counterintuitive for countries to pledge in one fora to seek to improve competitiveness, expand development horizons and eradicate poverty and then with the proverbial invisible hand impose conditions that place those goals in jeopardy.”

“The impact of the contraction of corresponding banking relations, the reputational damage from arbitrary assertions which undermine the legitimacy of a country’s financial services sector and policies that limit developing Countries, like mine, from access to development financing help make collectively espoused development goals more difficult to attain than they need to be,” the Bahamian envoy said.

Declaring that the OAS has “a role to play in advancing initiatives that will enhance the opportunities for development, Dr. Rahming added, “We look forward to SEDI’s greater involvement in matters such as those raised in this morning’s deliberations.”

He concluded, “Again, we thank you Chair for convening today’s Meeting. We offer our endorsement of the declaration before us and we reaffirm that we see this as the first of many discussions on real challenges to our collective, integral development and which can move the hemisphere closer towards the uniform and level playing field we all expect.”

His Excellency Dr. Elliston Rahming, Bahamas Ambassador to the United Nations and the Organization of American States (OAS), delivering The Bahamas statement on Banking and Financial Services Challenges in the Americas at the special meeting of the Permanent Council of the OAS on Wednesday, March 30, 2016. 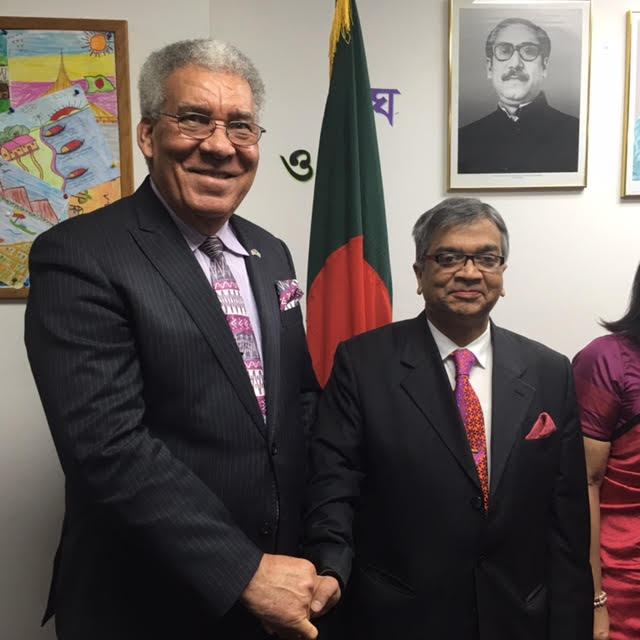