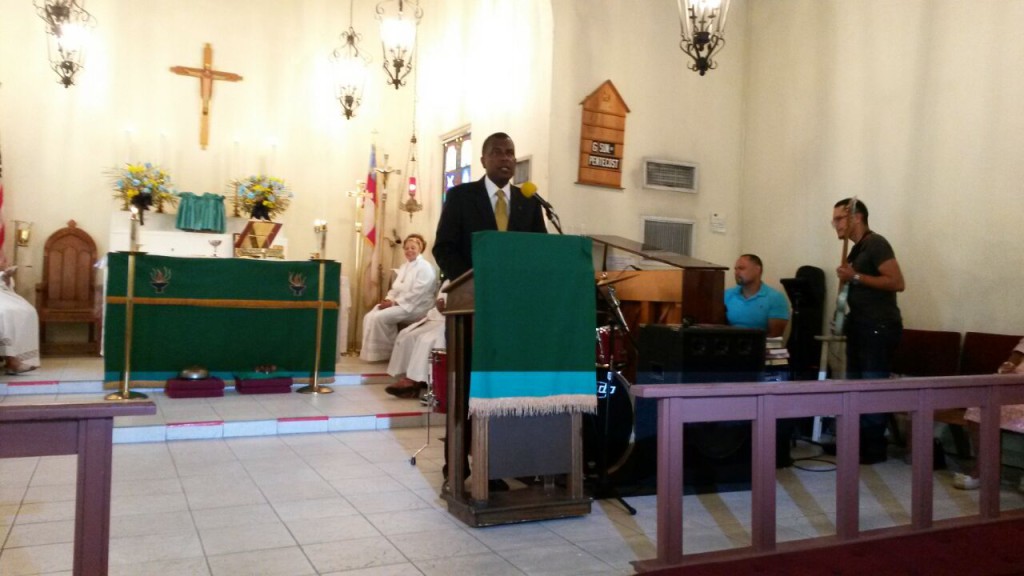 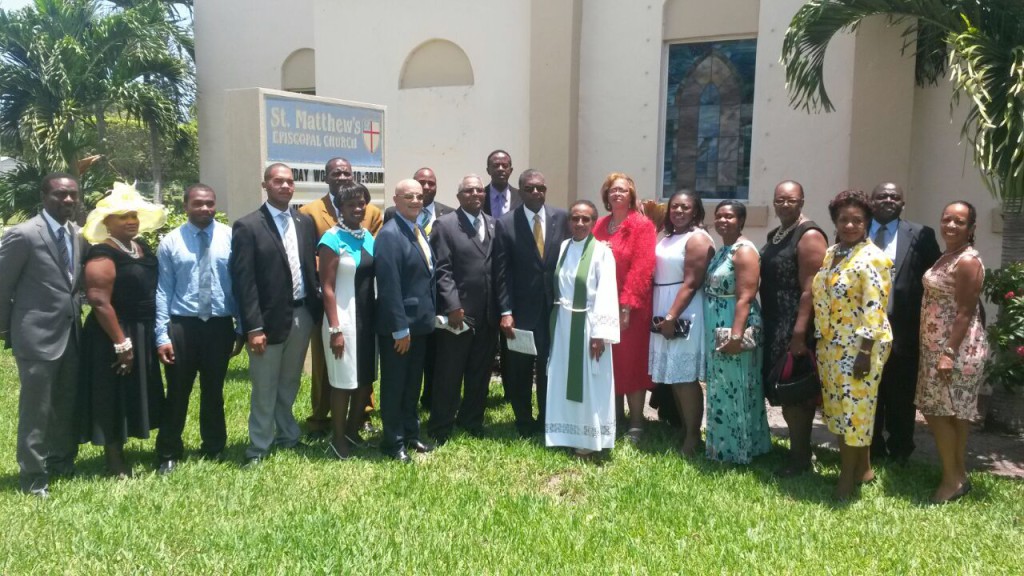 stuff times;”>Photo with the priest and attendees after church. Rev Marcia Beam presided. She is a Bahamian descendant.

It is a pleasure to be back here.  I say that because this was a place I visited very often as a child.  I am a cousin of our rector and as a child I spent many a summer holiday here.

I remember with fondness my Aunts Roslyn Ivy and Marge McKay.

My younger brother and sister Matthew and Marva were born here in 1960 and are citizens of the United States as well as The Bahamas.

Delray is steeped in Bahamianism and I have heard from the Consul General that for a long time it has been the plan to have a service here in Delray.  I am glad that we are able to get this one organized.

I am happy that you still remember with fondness the old country.  We are equally as proud of the success of many of you here in the new country.

In so many respects we are joined at the hip and the two countries have a symbiotic relationship.

In the great span of history forty two years is not a long time but in the life of our nation that is a long time.

What it means is that almost all of the founders of the modern country are gone.  The few who remain have fading memories. Increasingly it is left to the next generation to tell the story.

As usual when you are so far from the source and when there are not many around who remember the original times, the story gets a little twisted.  You remember that after Moses was gone and Joshua was about to take the children into the promised land, some wanted to go back to Egypt.   It seemed like that was the place to go and looking back it seemed that all had been well in Egypt.

Perhaps that is the way it looks to many young Bahamians today who did not have to grow up under the scourge of racial discrimination and lack of opportunity.  Perhaps they see no difference between the trouble which they face today with an economy that does not provide the jobs they need or want.

There is a difference, however, and that difference is that we are the masters of our own fate.

The Bahamas was built from scratch by the men and women who delivered the country from racial oppression and deprivation in 1967.  That does not mean that they invented everything anew but what is clear was that up until 1967 universal education was not considered a right of every child.  That changed dramatically.

The 1967 administration, the men and women of that generation knew that without education we could go nowhere and determined that the resources of the state would be used to help to create an educated generation.  We accomplished that.

They also built a social safety net with the coming of national insurance.  Today, people complain that national insurance does not provide enough.  There is a need to do more to be sure but just think where we would be without it today.  So many people would be unable to take care of even their most basic needs.

When the British handed over the instruments of independence in 1973, the impression was created that there was a neat little package that they handed us and said “go for yourself”.

I remind people that what the British gave us as they left was the Police College which they built at the princely sum of 800,000 dollars and then they jumped on their ships and left.

All that you see in The Bahamas today was constructed, designed and maintained by the generation which succeeded to the country in 1973.

We were able to keep ourselves alive and to maintain one of the highest standards in the world.

Today what do we face.  I think we face a future which has challenges but which will great greater successes, if only we believe.

There is 30 per cent unemployment amongst the youth.  We have to solve that and there is an aggressive programme to do so.

We had hoped that he Bahamar resort would be open by now.  This is a project which was to employ some 5000 people.  It would have been and still will be the largest investment in the Caribbean of a hotel nature.  It can still be done. People must not lose faith.  Neither must they be hornswoggled by the blandishments and disguises of those who say they are doing something for your own good while in reality, it is for their own good.

The Bahamas government is the place where people look to solve the larger issues. With this Bahamar issue, which involves Bahamian land, Bahamian employees there could be no turning back in the face of an attempt to effect an act of unfairness on the Bahamian people while trying to fool us that they were looking out for our best interests.

There is a great deal of patience that will be required on the part of us all as the scenario unfolds but please be assured that the project as to succeed and at all times the government will look out for the best interests of the Bahamian people.

When the dust has settled, the truth will out and the project will succeed.

We remember our history and what drove thousands of people to leave our small country and come to this country.  We are pledged to ensure that our economy remains successful so that our children can have future at home.

So I want to thank you all for what you do to defend our country abroad.  You help our Consul General and his staff.  I hope that the Consul General is ready and available to help.

This is a wonderful opportunity today and so on behalf of the Government of The Bahamas, our Governor General Dame Marguerite and the Prime Minister Perry Christie, I wish you happy independence day.