THE BODY LANGUAGE OF THE FNM 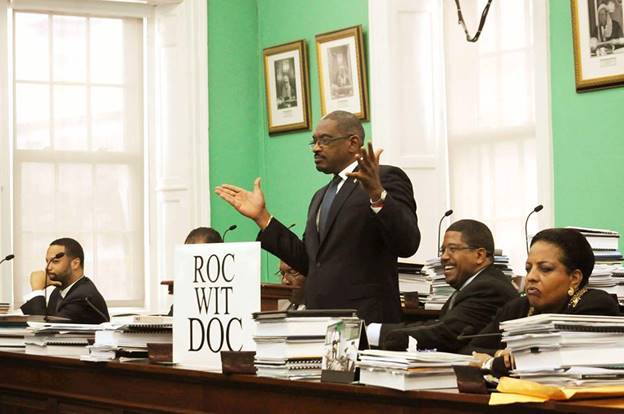 At one point during his tedious and lackluster budget address in the House of Assembly on Monday 20th June, Dr.  Hubert Minnis, the Leader of the FNM Opposition, in his hapless way was seeking to make what he thought was quite a telling point about power supply in The Bahamas.  He was advocating solar energy and how individual homes could by using solar make a contribution to the grid.  He was saying that his government would make it possible for stand-alone solar homes.

He neglected to acknowledge that the present government already allows that to happen.

You needed to have been there and seen the look which Neko Grant, the Leader of Opposition Business in the House gave him when he said it.  It was a look of scorn and disdain.  As Bahamians would say, he cut his eyes at Dr. Minnis.  It was there for all to see and there was no hiding it.

Later in the week, an email from Mr. Grant, the contents of which we publish today appeared to confirm that disdain for Dr. Minnis by his own MPs.  It was all the more telling since Mr. Grant is the most senior of all the FNM MPs, a former Minister to boot.

The body language in the House of Assembly shows that the FNM Opposition is simply not getting along.   It appears that they do not like one another very much. They do not look each other in the face and they look as if they are only going through the motions.  They want to be anywhere else than there.

Dr. Minnis is oblivious to the fact that there are five MPs who sit at this side out of the total of 8 on their side who simply do not support him. He has only Peter Turnquest his Deputy Leader and maybe Edison Key and Renward Wells.  Mr. Wells you can’t really count on because Mr. Rollins knows how to yank his chain.  At the end of his address last Monday, as Dr. Minnis introduced the theme of his next campaign for re-election as leader “Roc with Doc”, he had to reach over and hold Mr. Turnquest’s hand in the air with him.  It did not look like Mr. Turnquest was an enthusiastic volunteer.

This is all curious stuff for the PLP.  The PLP sits and watches with amusement as the FNM picnic on one another.  Andre Rollins who bolted from the PLP into the arms of the FNM, still carrying on like an idiot at every turn, attacking the very man who brought him in and saying he cannot work with Dr. Minnis and will not run with him if he wins.  My, my, my.

Loretta Butler Turner announced that she is running once more against Dr. Minnis for leader of the Party when the convention takes place in late July.  She announced it in a curious way.  Dr. Duane Sands who was just appointed to the Senate by Dr. Minnis posted on his Facebook page that he was running with her for Leader and Deputy Leader.  No formal announcement, just that post.

No one believed for a minute that this was the real team.  The expression stalking horse was everywhere.  This was all the more so when the evil one Hubert Ingraham, the former Prime Minister, showed up at the swearing in of the two new Senators and said he had told Dr. Minnis long time to appoint Monique Gomez and Dr. Sands to the Senate.  Now we know who is calling he tunes to the piper.

Notwithstanding all of this though, Dr. Minnis is promising to kick ass and kick their asses.  By our count, he has the delegates by far.  He is afraid however that the longer this goes on, those associated with the Bay Street group will up the ante and start buying off the delegates at 5,000 dollars a pop.  That’s the latest price.

At the moment Dr. Minnis is the odds on favourite to win the leadership again.  Then we are gonna see the real fireworks.  The bet is if he wins that he will rid the party of all of them.  There will be a purge the likes of which the FNM has never seen, worse than Pinding’s night of the long knives when he purged the party of all of his dissidents back in 1977.

The PLP again should take no comfort in this though.  Amusing and interesting and titillating as it is, we are not sure that the public is paying any attention to this. The public is concerned, is consumed by the need to address jobs and crime which appears to be to be rearing its ugly head again, with the inability to stop the murderous rampage throughout the land.  Those are the real issues. In this regard no matter what, the opposition arguments will appear attractive.  The throw the bums out mentality as they would say in the United States.