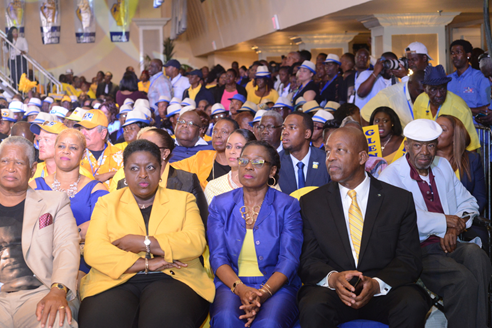 STATEMENT BY THE PROGRESSIVE LIBERAL PARTY

Democracy “alive and well” in the PLP

In what party chairman Bradley B Roberts characterize as a magnificent display of democracy, incumbent party leader and Prime Minister the Rt. Hon. Perry G. Christie was returned as leader after elections were held during the party’s 52nd National General Convention being held at the Melia Nassau Beach Resort on Thursday the 26th January. Mr. Christie easily defeated former cabinet colleague and candidate for Fort Charlotte, Alfred Sears.

“This was a magnificent display of democracy” said Mr. Roberts who was returned to the post of National Chairman unopposed. “The free will of the duly elected delegates was exercised today in a transparent manner and in accordance with the provisions of the party’s constitution. I extend congratulations to both Mr. Christie and Mr. Sears and I look forward to working closely with both men as we emerge from convention a stronger and more united family.”