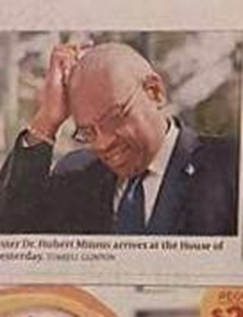 Clueless that’s how you would describe this new FNM Government.  From the time they came into power on 10 May, it’s been one clueless decision after another.  The zig zag of hubris and self-righteousness. They are led by a man Hubert Minnis who just as you see that picture abstracted from the Nassau Guardian does not have a clue what he is doing and where the country is going.  All he can do is scratch his head.

He can’t seem to get his Minister of Tourism to shut his mouth.  Always talking about one thing after the next and always getting it wrong.  We exposed Dionysio D’Aguilar and his sneering dislike for black people last week.  Here is man who cheated the customs people twice yet  true to form one of the FNM partisans last week posted in reply to the story that we must get on with life and stop running on with that,

How about the hopeless, hapless Minister of National Security by the name Marvin Dames. Now he’s priceless. He claimed in The Tribune just two weeks ago that he would keep the National Intelligence Agency and build a legal framework in which it could operate.  That was probably before the fellows got to him.  Now he came back last week to say that he is going to scrap NIA after all, and the people who worked in it are being sent home because they did nothing.  That cannot be true.

The fact is they will have no choice but to bring and reconstitute the National Intelligence Agency no matter what they call it.  We are sure they will find another name for it but come back it will.  But just another example of the clueless nature of this FNM.

Then Carl Bethel, the Attorney General, allowed Fred Smith, the practitioner of quackery law, to announce for the government that it was abandoning the appeal of the parliamentary privilege ruling against Jerome Fitzgerald, the former Minister of Education.  They said it was going to cost too much money and that they found that it had no impact on Parliamentary Privilege.  Unfortunately, neither Mr. Bethel or his colleagues and certainly not the strange Fred Smith understood their case.  But they have abandoned the Parliament and now will have to pay the exorbitant costs to Fred Smith. But as the Leader of the Opposition Philip Davis said, it’s pay back for having given all of Save The Bays money to the FNM in the general election.

Okay so who do we have left that seems to get it.  Edney Anderson owns Pineyard Steel in Grand Bahama.  He trains young men and women how to weld and they provide workers for industrial operations in Grand Bahama.  So at his company’s graduation ceremony last week, Peter Turnquest, the Deputy Prime Minister, was there.  He abandoned his prepared text and told his audience that they (the FNM) get it.  They need to start talking about getting some people to work in Grand Bahama.  Cash on the ground.

We hope he does in fact get it.

Stop talking this economy down. Stop complaining about the PLP and what they did and didn’t do. You are the government. How about governing now and stop the trash talking.