THE MADNESS OF EILEEN CARRON 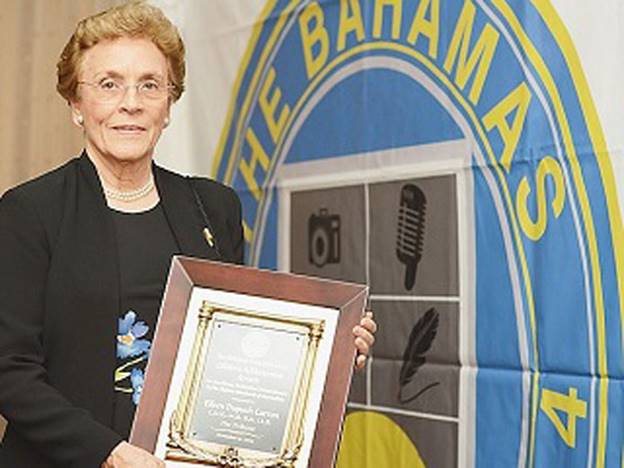 There is a very bitter and lonely widow sitting at her computer out in Camperdown every day God sends, spewing bile and bitterness in every direction.  She cannot help herself.  Lynden Pindling defeated all the old values: prejudice, racism, white superiority, British colonialism, back in 1967 and to this day she cannot get over it. Try as she might, she  cannot.

She tries to portray her father he late Sir Etienne, who was a Member of Parliament and who preceded her as Editor, as a champion for justice when he moved a resolution condemning racial discrimination in public places back in 1956. Some say it did take a bit of courage but most believe it was a cynical political calculation on his part in the face of losing prospects in the 1956 general election to get the black vote.  Her father died a bitter man because in his words he was defeated in that election despite all that he had done for the “coloured people” by a “mere plumber”.

There is a special madness at work it appears.  Between last week and the week before Eileen Carron, that bitter widow, wrote no less than six editorials about one subject. The subject was Fred Mitchell MP.  Fred Mitchell this; Fred Mitchell that.  It is simply another example of an unnatural infatuation or preoccupation with one public figure which simply defies logic.

On one level the attacks and the preoccupation are simply racist.  Mr. Mitchell is the typical unapologetic Negro who does not know his place. How dare he?

On another level, it is simply perverse.  In a response to the sixth of those editorials in The Tribune, Mr. Mitchell said that her mind was as twisted as a corkscrew.

One thing for certain though is Mr. Mitchell has never once been in a cocaine haze.  His mind from all accounts is drug free and alcohol free at all times.

These are very serious times when this kind for threat is made to public officials for making comments which respond to ad hominem attacks of a very personal nature.  In other words, it appears that the logic of these people is that a PLP public figure, because he is a public figure,  can suck up everything that is thrown at him and not respond and say nothing.

Last week, The Tribune struck a new low with the disgraceful publishing of untested affidavits which were only designed to sully the name of the Deputy Prime Minister. Not a comment reported from him.  No attempt by the newspaper to reach him for comment.  They just published it.  The reports claimed that two hired killers, claiming association  with the Deputy Prime Minister were hired to kill Louis Bacon by Peter Nygard who is in a bitter fight with his Lyford Cay neighbour Louis Bacon.

The affidavits were introduced into the public domain by Fred Smith who is on Mr. Bacon’s payroll.  How could they possibly have any probative value, given Mr. Smith’s record of exaggeration and work for hire? Yet The Tribune that is paid 15,000 dollars for each of the special ads they run for Save The Bays, a front organization funded through Fred Smith Q C just ran this prejudicial affidavit as if it’s the truth.

Then the next day the reports of a video tape surfaced purporting to show Peter Nygard  using expletives to describe a situation with regard to the leaders of the PLP and their relationship.  He was out of order.  It makes for interesting reading, salacious stuff and feeds into the narrative of which we are aware; the FNM’s strategy is death by a thousand cuts.

But Eileen Carron deserves a special place in hell for the way she conducts her newspaper’s affairs.  Some argue that she is iconic and is being honoured for her work as an editor of The Tribune.  We condemn her.