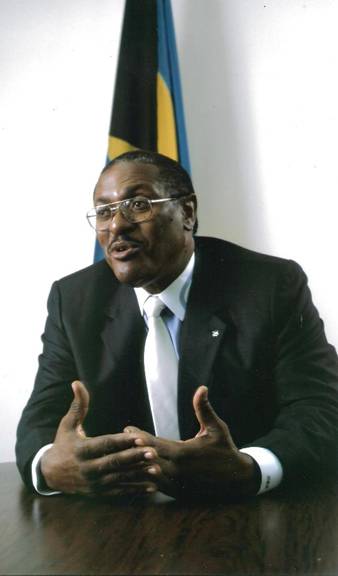 The Nassau Guardian has become so irrationally anti PLP that you can never wonder what is going to be found in their columns.  It was so bad  on 11th May that Bradley Roberts, the PLP’s Chair felt compelled to issue this statement.  What continues to concern us is that with the thousands of people benefitting from the PLP and its governance, not one independent voice seems to rise up and denounce this biased behavior on the part of the Nassau Guardian and the unethical conduct of some of its reporters.

See the statement below:

I refer to the 11th May 2015 editorial of the Nassau Guardian. While the editor is entitled to his or her opinion, the reasoning must be based on empirical data if it is to have a semblance of credibility. Additionally, the editorial content must be accurate but needless to say, the editorial on this day failed the litmus test on both counts.

As much as the editor wants to deflect from the successful implementation of the government’s fiscal consolidation plan, the fiscal reform policy of the PLP government was a success and prevented the country from further downgrades of its credit ratings which has serious implications for the country’s economy, especially investment. Given the deep black hole the FNM government left the country in, the success of the entire economic recovery of The Bahamas is predicated in large part on fiscal reform as the government sits at the center of the macro-economic cycle; fiscal reform was a game changer for the country. The facts of the matter are that fiscal reform was necessary, the FNM government lacked the political will and strength of leadership to make that tough policy call and the PLP did. The PLP government must take full credit for saving the economy after the FNM tried to sink it. Further, contrary to the editor’s assertion, the evidence is clear that the PLP did in fact campaign on fiscal reform and delivered on it – just read page 58-59 of the PLP’s “A charter for governance.”

For the edification of the reading public, the Guardian’s editorial argued that sure, fiscal reform was necessary and the PLP did successfully implement both fiscal and tax reform but the PLP government cannot take any credit for the success of the policy because they did not campaign on it. Not so. The evidence shows otherwise and once inaccuracies can be identified in the Guardian’s editorial, the entire editorial collapses because it cannot be seen as credible.

The editorial claimed that the PLP government failed to get back the two percent or “an outright majority stake” in BTC. This assertion is also inaccurate. The PLP government did secure the additional 2% stake in BTC and did so at no additional cost to the Bahamian people even in the face of criticism from many critics, including the editorial board of the Nassau Guardian who repeatedly and slavishly carried forth the FNM talking point that Prime Minister Christie was on a fool’s errand, meaning his quest to secure the additional 2% stake in BTC was an impossible task and that he should quit. Having succeeded to the chagrin of his critics, they simply moved the goal post again to satisfy their pre conceived notion of failure even before the policy was pursued. As for operational control of BTC, this is a redundant point because the PLP never intended for the government to assume operational control of BTC, a policy the government of The Bahamas abandoned as far back as 1998.

Since this claim is also inaccurate, the entire editorial comes off as an extreme and biased tirade against the PLP government that lacks credibility.

“Three years on, help and hope are nowhere to be seen” was the editorial headline, but the editor’s perspective on jobs creation was particularly interesting and I would be remiss if I do not comment.

In May of 2012, the PLP inherited a labour market where unemployment had increased by an average annual rate of 20%, which means that unemployment doubled in five years on the watch of the FNM government. There was no criticism of the FNM government by the editorial board of the Guardian, only the excuse that the recession was at fault and not the failed policies of Hubert Ingraham and the FNM. They saw and heard Ingraham try to destroy that Baha Mar project, the only game in town, but not one word from the Guardian’s editorial board. The FNM failed to attract any substantive projects, but mum was the word. They saw the deleterious impact of “stop, review and cancel” but not one word. They saw the bungled New Providence Road Improvement Project (NPRIP) that caused businesses to close and massive job losses but not one word beyond blaming the recession. It is clear that none of those poor decisions by the FNM had anything to do with the recession, but never let the truth get in the way of a good story.

The PLP inherited this mess in 2012 and by November 2014, the economy added more than 8,800 jobs under the watch of the PLP. Additionally the Lyford House Hotel opens today; Baha Mar is about to open in months; the Nassau Resort and Quality Inn on Bay Street are being refurbished; the Sarmiento group is about to broke ground in South Eleuthera; Baker’s Bay in Abaco is expanding; work has begun on the Hilton Hotel refurbishment in addition to a new hotel, marina village and board walk and after much negotiations and hard work, the cruise ship port for Williams Town in Grand Bahama is imminent.

The editorial board of the Nassau Guardian is well aware of these projects and the hard Prime Minister Christie is doing on behalf of the Bahamian people but tells the Bahamian people and the world that help and hope are nowhere to be found. Statistical data reveal over and repeatedly that reduction in the discouraged worker category is proof positive that Bahamians are hopeful and increasingly optimistic about the country’s economic turnaround and future prospects but never let the truth get in the way of a good slimy misleading story.

Basically the editor decided ahead of time that nothing the PLP did in its first three years was successful, only to craft arguments after the fact to meet his or her biased preconceived notion.
The editorial board of the Nassau Guardian should carry on smartly.