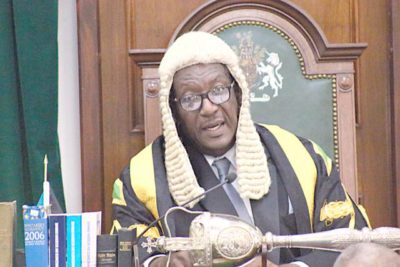 We repeat this story by Denise Maycock of The Tribune in Freeport. The Speaker again has misspoken. First, he ought to stay out of controversy.  If he wants a position where he can vent his spleen as he likes, then step down as Speaker.  Then what he says betrays like most FNM politicians the woeful ignorance which is their stock and trade. The fact is the PLP did everything which he is calling for about Freeport and the Grand Bahama Port Authority before they left office.  That is in fact the law now but the FNM which he supports wants to repeal the law and give to the Port Authority the powers which it used to exercise:

SPEAKER of the House of the Assembly Halson Moultrie said this week that the greatest challenge that Freeport faces and must be broken is “the stranglehold of the Grand Bahama Port Authority”.

While in Grand Bahama, Mr Moultrie, who has made controversial statements in the past, severely criticised the entity for the vast amount of land that remains undeveloped in the port area, which is controlled by the Grand Bahama Port Authority. He also said it is his view that the Hawksbill Creek Agreement be repealed or renegotiated.

“In Freeport you have a challenge, the greatest of which is all around you; the stranglehold of the Port Authority must be broken,” he said on Tuesday while speaking at a special assembly at the Tabernacle Baptist Academy.

“The influence of predatory investors must be liquidated. All over The Bahamas, speculative foreign landowners who fail or refuse to develop their land must be divested of their legal interest in that land, and that land must be returned to the Bahamian people.”

Mr Moultrie said that his view is not xenophobic, but rather patriotic.

“Grand Bahamians have been perishing for quite some time now,” he said. “The visionaries of the Magic City and the Port Authority are all dead now and it is very apparent to me that their vision died with them. Their successors, agents, and assigns have yet to show that they have any of the vision of their founding fathers of this great idea that we call Freeport – but the question is what are we prepared to do about it?

While fully regaled in his robe and wig, Mr Moultrie shared his views about the Hawksbill Creek Agreement, which was extended for an additional 20 years.

“I want to say at this juncture that this statement I am making today is an impartial, independent, neutral view of Halson Moultrie, the speaker, and it is not a government policy. It is my view that perhaps it is time to review, repeal, rescind, or renegotiate the HCA. No longer in Grand Bahama should you be prepared to flog a dead horse. The visionaries of the Port Authority are all dead now.”

Mr Moultrie continued: “Grand Bahama, to change and improve your circumstance, you must move from the spectator stand and get in the game. Those persons who are privileged to be beneficiaries of the Bahamian hospitality. Those who we welcome into our nation must understand they are not to bend or break as was said in the past, but they must understand they are to straighten up and fly right.”

Saddened by the depressed state of Freeport, Mr Moultrie said that the magic must be returned to Freeport, and that a new generation of Grand Bahamians must be prepared to make a difference.

He recalled visits to the Magic City, as Freeport was called in its heyday, in his younger years when it was a booming city. He said that he hurts to see Freeport in such a decline.

“I love Freeport; I’ve always loved Grand Bahama and Freeport in my younger days especially when I was a basketball player when we would come into GB, and GB was such an exciting and active city.”

“It aches my heart to see GB and Freeport in the shape that it is in. The magic must be put back into this great city we call Freeport,” he said, receiving applause from the audience.

He said he drove around Grand Bahama earlier this year and what he saw left him shocked.

“I asked my driver to drive me around the perimeter of the port area, an area covered by the HCA, which I was made to understand is 36 square miles of property,” he said.

“I was shocked. First, by the number of abandoned buildings and the extinct businesses. The Royal Oasis has become a horrific mirage. And you know what is bizarre? The International Bazaar… what was once a majestic bustling rendezvous of social and economic enterprises has now become a vandalised mound of rubble surrounded by bushy vegetative growth.

“I was absolutely stunned by this reality. And I asked myself, is this what the once world-famous Freeport has become? Is this to be final chapter of the Magic City?

“Grand Bahamians, I admonish you today that it is time to move off the sidelines and get in the game. Self-determination demands that Grand Bahama challenge the status quo. I say to Grand Bahama it is time to get out of bed on the right side,” he said, followed by applause.

“In a democracy, you have the right to petition your government to call for the repeal, revocation, (rescinding), or renegotiate any agreement, including the HCA.

“If it is to be the people’s time, it is also time for people to take action and to take a stand. So, GB it is up to you whether you will continue to live a false hope of a magical illusion or put your shoulders to the wheel and make a difference.”