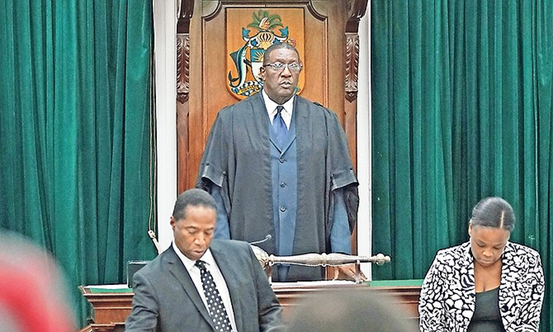 A fitting addition to the photo above from The Tribune of Halson Moultrie at work in the House of Assembly would be a noose. There should have been a hangman’s noose and a trap door below and the PLP should have had a lever to pull and drop the floor.

The FNM pulled a fast one, a Parliamentary trick and sleight of hand and voted to have confidence in the Speaker. In doing so they failed to address all the nasty perverted things that he said.  He called the Chairman of the PLP perverted and a reprobate but the real pervert and reprobate is the Speaker of the House of Assembly who trashed the reputation of the House by his behaviour over the past two weeks.

His promise to move forward by being impartial and learning his lessons are as empty as the apology and forgiveness which he said he gave.  Who asked for his forgiveness no one knows and no wants his forgiveness? “All is forgiven, “he said when asking if he had anything to say about the biting comments of Fred Mitchell the PLP Chair.

Forgiveness can only be given by the one who has been offended. The Speaker wants to turn the narrative around and pretend that he is a victim. He said that people had gone into his constituency and called him everything but a child of God.  Poor him. He deserved to be called what he was and more.

The Leader of the Opposition called him a buffoon.

Of course the PLP cannot dwell on this forever.  However, the PLP must watch this man very carefully. This cannot be the end.  His reputation should be forever and repeatedly tarnished in the public domain so that when people see him they will know that they are dealing with a dumb, stupid and prejudiced man.

We agree with the Leader of the Opposition, Halson Moultrie has the mark of Cain upon his forehead.

He should come to know that in proper circles he will be ostracised and there is no PLP who has any respect for him.  That is where we are going forward.