THE THREE DUMMIES OF THE FNM 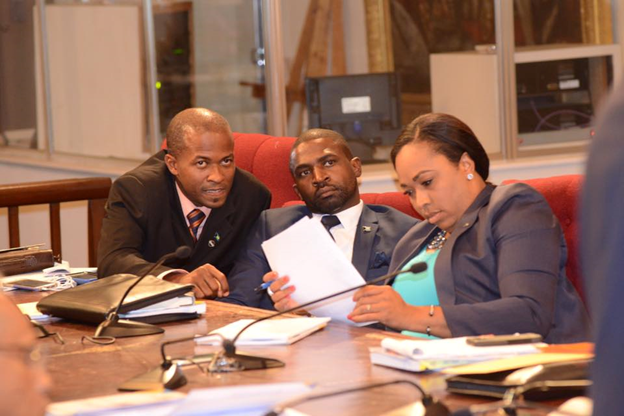 The picture is that of three FNM Senators in the Senate. Here is what Ranard Henfield posted as being relevant to that picture on his Facebook page:
“That moment when you just heard the former Foreign Affairs Minister justify spending hundreds of thousands of dollars to eat quality food, live in quality accommodations and travel first class at the expense of a people that are unemployed, over-taxed, who are putting grocery back at the counter, whose electricity is off, who had to pull their kids from private school and the list goes on.

“I sit and wonder if they just don’t get it!

“We as a people are tired of politicians living like kings and queens at the public’s expense!”

We in the PLP wonder if these jackasses don’t get it. Our country has to engage in foreign affairs and trade. You don’t do that sitting your stupid assess here in Nassau. You have to travel in order to do so.

Mr. Henfield (the Senator) of course doesn’t get a lot of things. He thinks that people are fooled by the fact that he is appointed after consultation with the PLP’s leader that he is some neutral body. Everyone knows if he weren’t an FNM he wouldn’t be anywhere near the Senate. If it walks like a duck, quacks like a duck, it’s a duck. He came marching in black but all the time we knew he was red. So he sits in the Senate to help red propaganda.
We wonder if he gave the advice in his post to Darren Henfield, the Foreign Minister, as he jetted off to Washington D C in the first month of his coming to office. Did he give that advice when Darren Henfield jetted off to Cancun to mix with the Mexican babes there and oh yes to attend an OAS meeting with a staff of four? So will he tell that to the Prime Minister Hubert Minnis when he goes off to Grenada with his retinue of retainers including the Foreign Minister to the Heads of Government conference on 4th July.

We suppose Dr. Minnis will be staying in a bed and breakfast and Mr. Henfield will be sleeping on the beach in a tent and eating patties from the roadside. There is good place to get roast corn that can be recommended.

The standards under this FNM government have simply fallen to a level of stupidity which is unbelievable. The crudeness of their commentary and the lack of capacity to understand even the simplest point, has led to a general dumbing down of the country. Of course in the land of the blind, the one eyed man is king.

This is what we face with these three and their leaders. They are in the Senate of The Bahamas. This is the drivel and anti-intellectualism they present as commentary and public policy.

Did Mr. Henfield say that to Dion Foulkes when Mr. Foulkes jetted off to Geneva with a full delegation from The Bahamas at the International Labour Organization’s conference?

Stupid is as stupid does. There is nothing kind that can be said for such as stupid and idle comment.
Give those three a dunce cap and tell them go sit in the corner.