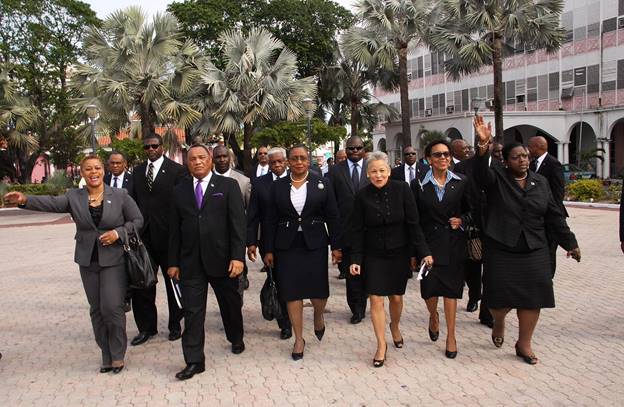 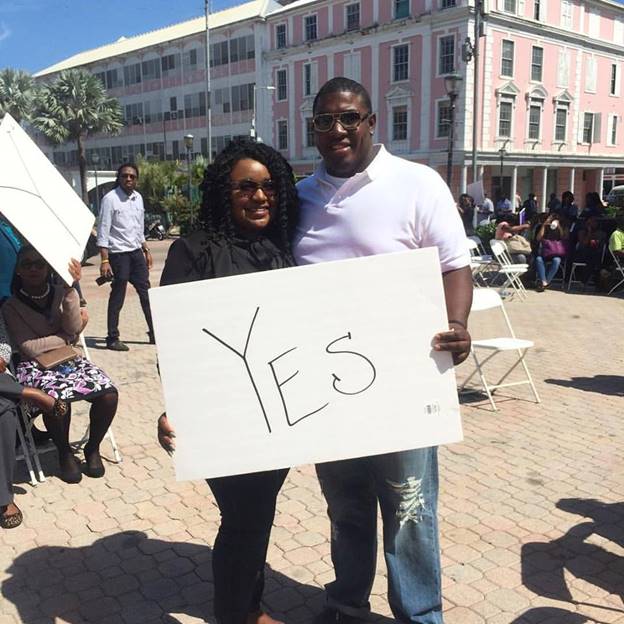 D’Asente Beneby, for Young Liberals Chair supports the yes campaign on 2 March in the Public Square 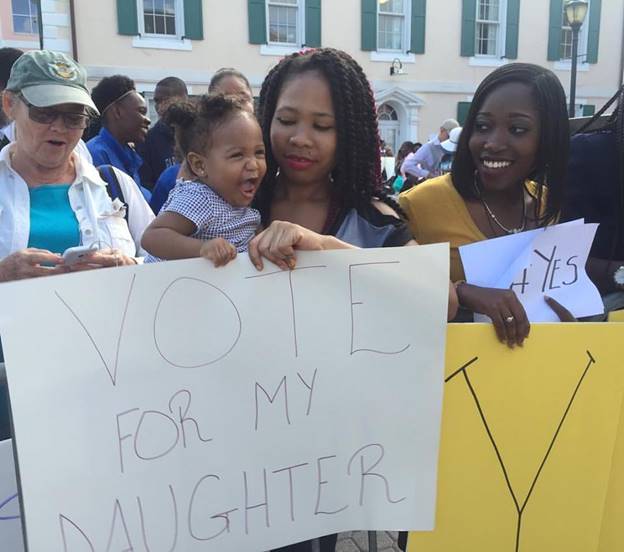 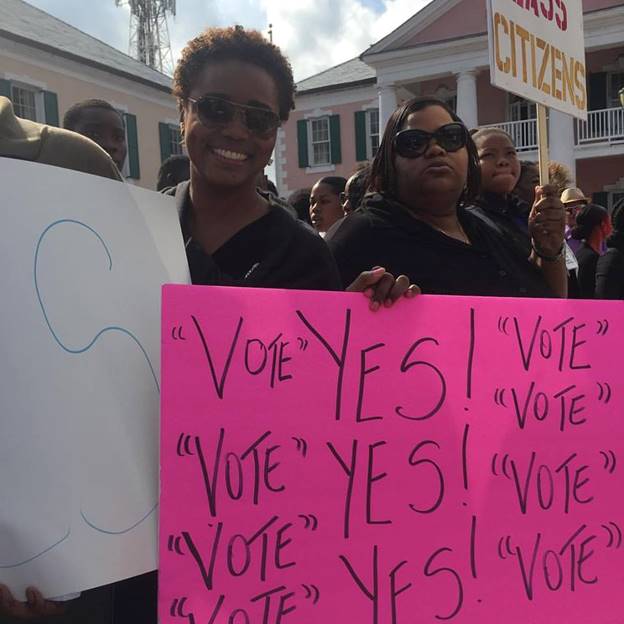 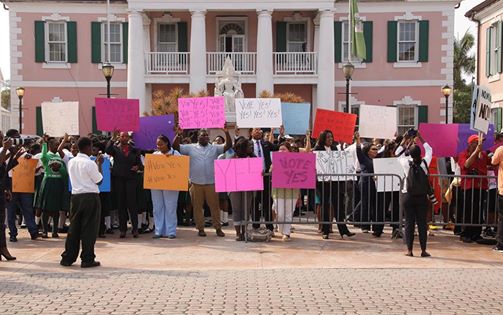 The full range of demonstrators in the Public Square 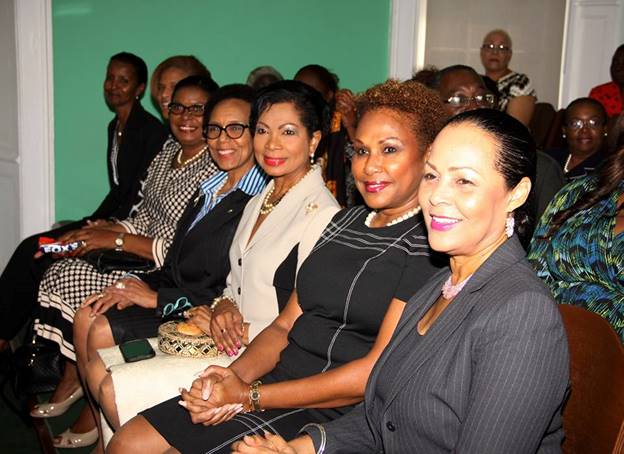 The wives of the leaders of the PLP in the House on 2 March awaiting the yes vote for gender equality joined by Government Leader in the Senator Allyson Gibson. 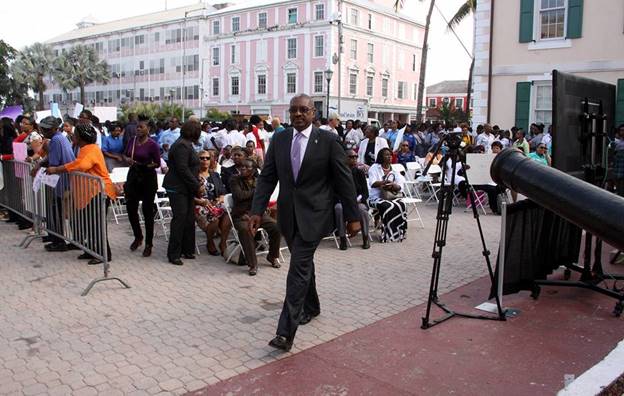 The Leader of the Opposition Dr. Hubert Minnis as he walked through the public square to the House on 2nd March to vote yes for gender equality. 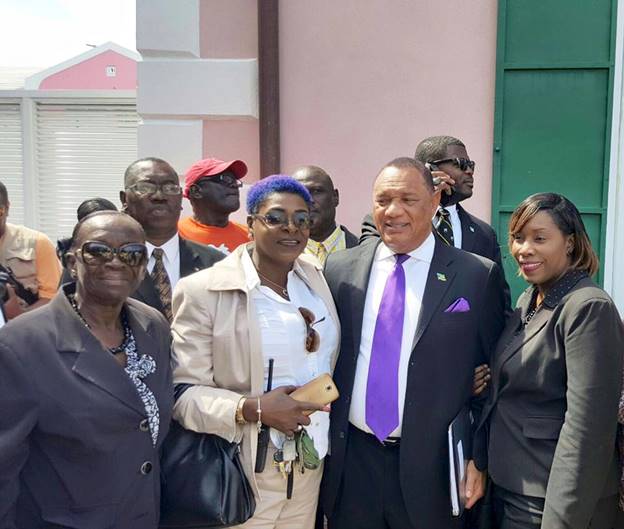 The Prime Minister Perry Christie in the Public Square following the yes vote in the House on 2nd March for gender equality.

Bill Number 1: 37 yes 1 absent — either parent can pass citizenship on to their child no matter where born

Bill Number 2: 36 yes, 1 No and 1 absent the spouse of a Bahamian woman has the same right to apply for citizenship subject to qualifications for reasons of national security and other matters

Bill Number 3: 36 yes, 1 abstain and 1 absent   to allow single Bahamian men to pass on their citizenship subject to proof of paternity

Bull number 4:  34 yes, 2 no, 1 abstain and 1 absent to put sex in the definition of what is discriminatory which would prohibit discrimination on the basis of gender—male or female.

We congratulate the Parliament and its leaders Perry Christie and Dr. Hubert Minnis for passing the four bills.

The work of piloting them through the Parliament was done by Dr. Bernard Nottage, Leader of government business in the House.  Excellent work by him.  Now the vote goes to the people.

The crowds were enthusiastic outside the Parliament.  The Church by and large supports the bills and the Opposition leader says that he and his party will campaign for their passage during the campaign.

The one discordant note was Rodney Moncur, the activist and radio talk show host, screaming at PLP MPs “Sissies, Sissies, stop sissying,” as they passed through the public square.

That is also the mantra of Lincoln Bain, the FNM candidate for Pinewood and radio talk show host, who claims to know a lot about the sex lives of PLP politicians.  URCA has not been monitoring the content of the shows.

The experts say that people like Mr. Bain often have a problem with other people sex lives because they have small penises.  If that is the case in their situation, then they are to be pitied.

Mr. Moncur does not have much to recommend himself but you ask yourself about Lincoln Bain.  Handsome man, beautiful wife, could have any woman he wants presumably. No doubt he can service adequately the relationship he is in so why is he preoccupied with someone else’s sex life.

This became an issue when the LGBT folks headed by Erin Green said they supported the bill.  Perhaps now that this discussion is again in the public domain, we will begin to understand why grown men who ought to know better have such defensiveness over a naturally occurring phenomenon in every human or animal population.

The Nassau Guardian’s Candia Dames did something which was dishonest in the sense that she led with the headline about the LGBT community’s support on the day of the vote, knowing the kind of reaction it would engender.  She gave the impression that The Guardian supports gender equality but is doing everything she can it appears to ensure that it fails because it is a PLP proposal.

We say the support of the LGBT community cannot derail this. Only women can derail this.  There are 15,000 more women than men in the electorate so it is women who can cause this to pass or fail.

This has nothing to do with who is sissying, or who is the head of the House.  His has to do with equality under the law for men and women.

PrevPreviousBRADLEY ROBERTS ON THE PROTESTORS
NextTHIS WEEK IN THE BAHAMAS (25 FEB. TO 4 MARCH)Next