SKOKIE, Illinois -The Hon. Michael C. Fountain (second from right), Bahamas Honorary Consul to Chicago, attended the first meeting of the Bahamas Association of Chicago for the New Year on Saturday, January 28, 2017. Mr. Fountain presented highlights of consular activities for 2016 and discussed the collaborative opportunities available to the Bahamas Association and the Bahamas Consulate to engage Bahamians throughout the Midwest Jurisdiction in 2017. (Photo by G. Jenkins) 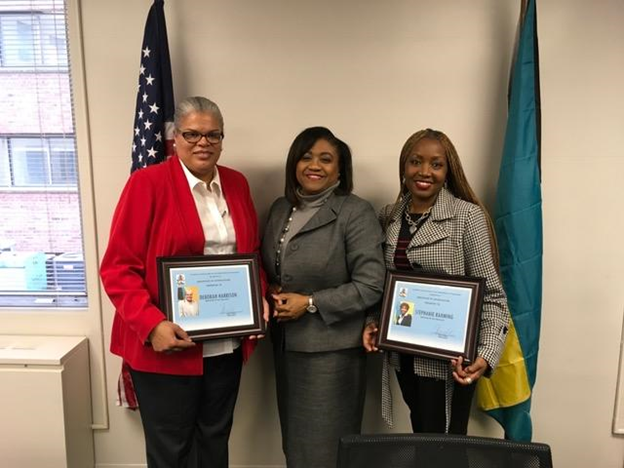 Mrs. Harrison, private secretary to the Consul General and Office Facility Manager, and Miss Rahming, Accounts Officer at the Consular Annex, were presented with their awards at a luncheon held in their honour on Monday, January 30, 2017, in the conference room of the Consular Annex, 1025 Vermont Avenue, N.W.

Consul General Zonicle said the committee was deadlocked in selecting an Employee of the Year because of the “outstanding performances throughout 2016” of both employees.

“She is an outstanding employee who is an active participant at the Consular Annex and goes beyond the call of duty whenever called upon,” Consul General Zonicle said.

Miss Rahming joined the staff of the Consular Annex in November 2013 as the Accounts Officer. Prior to joining the Bahamas Consular Annex, she was employed in the private sector in the field of banking.

“Miss Rahming is also an outstanding employee who, like her colleague Mrs. Harrison, participates with many of the activities within the workplace,” Consul General Zonicle said. “She is dependable and does not hesitate to go far beyond the call of duty for the smooth operation of the Consular Annex.”

Consul General Zonicle added: “Both employees are valuable to the workforce and they were selected on their good merits, performances attendance and punctuality. These officers are always on the job despite rain, snow or sleet. Regardless to what the weather or situation they are always on call. They are dedicated officers without a doubt who have shown and exercised their love for country and any task presented to them.”

The Employee of the Year award ceremony is an annual event hosted by Consul General Zonicle and members of her staff.