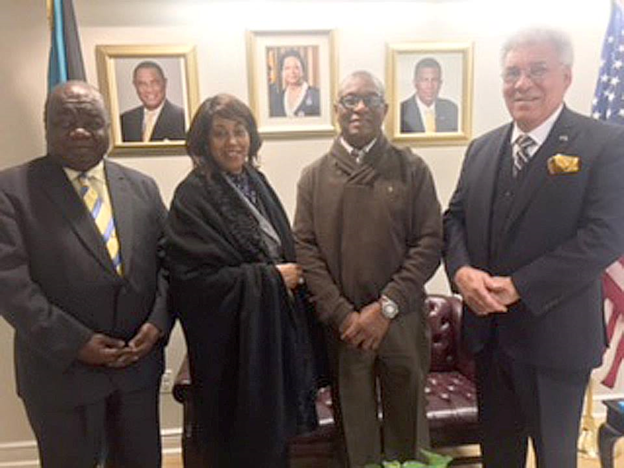 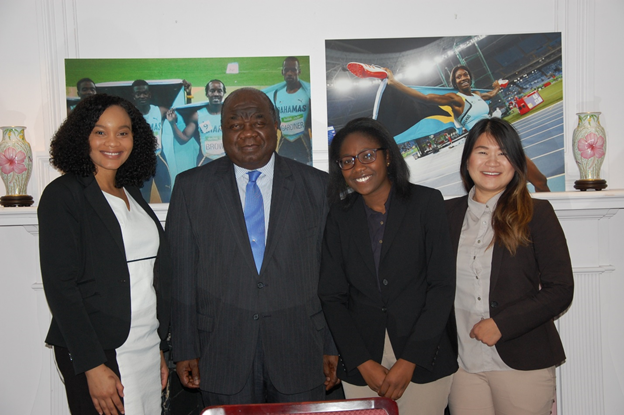 WASHINGTON, D.C. — His Excellency Dr. Elliston Rahming, Bahamas Ambassador and Permanent Representative to the United Nations and the Organization of American States (OAS), met with Ms. Kadija Bahrain and Ms. Eloise Lee of the Heavenly Culture, World Peace, Restoration of Light (HWPL) at the Embassy of the Bahamas on Wednesday, February 22, 2017. Founded in 2013, HWPL is an international peace organization in association with the United Nations Department of Public Information (UN DPI) that is working towards the goal of bringing all wars to an end and achieving world peace with the International Women’s Peace Group (IWPG) and the International Peace Youth Group (IPYG). For The Bahamas, the primary interest in meeting the group was to learn more about their international initiative of going into schools and teaching conflict resolution, anger reduction and peace leadership skills directed at making gang membership and violence less attractive to young people. Ambassador Rahming invited the group to submit a proposal for consideration by the Government of The Bahamas. Pictured from left to right: Ms. Jade Williams, Third Secretary, Embassy of The Bahamas; Ambassador Rahming; Ms. Bahrain; and Ms. Lee. 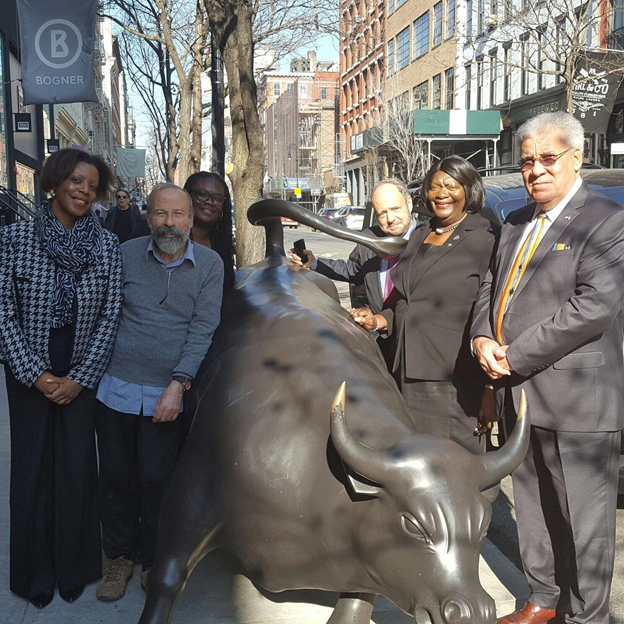 NEW YORK — Mr. Arturo DiModica, a world famous Italian sculptor, has expressed an interest in sculpting one of his masterpieces to be erected on the island of San Salvador in The Bahamas, where the great explorer Christopher Columbus, a fellow Italian, first landed on October 12, 1492.

Mr. DiModica, who was born in the small Sicilian city of Vittoria in the Province of Ragusa on January 26, 1941 and moved to New York in 1973, discussed his proposed project with the Hon. Forrester Carroll, Bahamas Consul General to New York, during a courtesy call on the Consul General on Thursday, February 23, 2017.

He said that he initially wanted to sculpt the piece for San Salvador 25 years ago when The Bahamas commemorated the 500th year of Columbus’ landing in what he called “the new world, but had to put the project on  hold.

He noted that he is now ready to fulfil his dream and, with the Bahamas Government’s consent, on the occasion of the 525th anniversary, he would like to establish a lasting memorial to that time when the two worlds met.

Many of Mr. DiModica’s masterpieces can been seen around New York City, but the most famous of them all is “THE CHARGING BULL,” which has stood at the entrance of Bowling Green Park since December 1989. The 3.5-ton bronze masterpiece is a great tourist attraction.

Mr. DiModica was accompanied by his friend Mr. Arthur Piccolo during his courtesy call on Consul General Carroll. 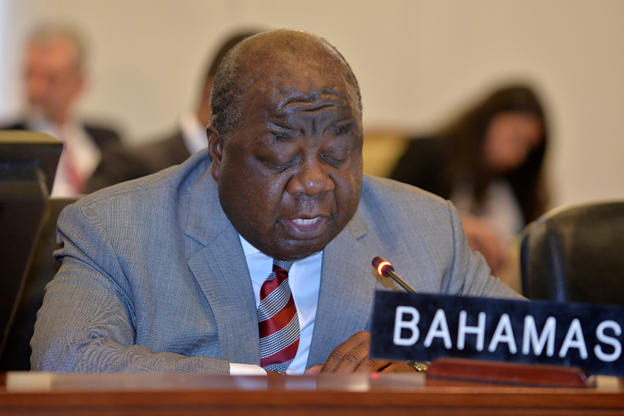 WASHINGTON, D.C. — His Excellency Dr. Elliston Rahming, Bahamas Ambassador and Permanent Representative to the United Nations and the Organization of American States (OAS), sounded a dire warning about the threat of climate change during his remarks at a joint meeting of the Permanent Council and the Inter-American Council for Integral Development (CIDI) of the OAS on Friday, February 24, 2017 in Simon Bolivar Hall of the OAS headquarters at 17th Street and Constitution Avenue, N.W.

The joint meeting provided Member States with the opportunity to analyse and discuss the Role of the OAS in advancing the Sustainable Development Goals (SDGs) in Member States.

Addressing the issue of climate change, Dr. Rahming said few challenges “rise to the level of existential threat for a country,” but for The Bahamas “and many other Small Island Developing States (SIDS), the threat of climate change is real, palpable and pervasive.”

“For context, should the current climate trend maintain and the sea level continues to rise within the next century, the entire archipelago of The Bahamas will be submerged,” Ambassador Rahming warned. “Therefore, we are anxious to see the commitments enshrined in the Paris Agreement animated by the urgency to mitigate and adapt to this threat; to see countries move beyond talk to action.”

At the outset, Dr. Rahming commended the Chairs of the Permanent Council (PC) and CIDI “for convening this most timely meeting to discuss what my Delegation views as one of the most pressing questions facing the OAS; i.e., what is required to ensure that this body maintains relevance in light of the new goals we have set for ourselves in the context of the 2030 Agenda for Sustainable Development.”

“As colleagues would be aware, I am tasked with wearing the twin hats of UN and OAS ambassador and therefore have been intently seized with the issue of the importance of the SDG’s and the support that countries like my own require to meet our collective mandates,” Dr. Rahming said.

He added: “The Bahamas has recently developed a National Development Plan to guide Government decision-making and investments over the next 25 years. The plan has four main policy pillars: The Economy; Governance; Social Policy and Environment (Natural and Built).

“As highlighted in the policy focus of our National Development Plan, The Bahamas has adopted and supports a comprehensive, integral articulation of what modern development is. We would join others in calling for this more holistic articulation of sustainable development to be translated within the OAS context, which would include not only a focus on the environment but also, the broad metrics of development outlined in the 2030 Agenda.”

Highlighting what he described as “several key areas that The Bahamas deems necessary to spur urgent OAS action and in the end, profoundly impact sustainable development,” Dr. Rahming first addressed the issue of “Enhancing Access to Aid and Affordable Developmental Finance.”

“In order to achieve the 17 Sustainable Development Goals of the 2030 Agenda, which comprise more than 160 targets, The Bahamas, an archipelagic Small Island Developing State, like others, will need the assistance of the international community,” Dr. Rahming said. “A focus on institutional strengthening within the framework of sustainable development will be meaningless if countries do not have access to sufficient affordable financing for development.  The economy of The Bahamas is exceptionally exposed to various types of vulnerabilities, including environmental, economic, social, and other external shocks, all of which at times disrupt the planned fiscal policy of the Government geared towards the further development of a sustainable economy. The reverberations and duration of these shocks are protracted and much more profound on nations like The Bahamas.”

Continuing, Ambassador added, “What we want is a broadening and modernizing of the development indicators used to assess development needs. The unique circumstances of Small Island Developing States, especially those that are most vulnerable, should be given due consideration when deciding qualifications for economic and development assistance.

“We therefore call for Member States to join hands to work together where possible on realizing the goals set out in the Declaration emanating from last year’s General Assembly to ‘support the various reform processes aimed at improving and strengthening the effective functioning of the international financial system and its architecture and foster an inter-American dialogue’ on these issues.”

With respect to Education and Human Development, Dr. Rahming said The Bahamas “realizes that education is both an accelerator of sustainable development and a precursor to the successful achievement of societies that are safe, well governed and inclusive.”

With regard to the role of the OAS,  Dr. Rahming said that as “the Organization undergoes this period of introspection, where we continue to pursue the important processes of mandate definition and prioritization, we have to be cautious about ensuring that we balance fiscal and practical considerations.”

“While the cost-benefit of administration for implementing a project has to be considered, we have to also balance this with an understanding that many of the smaller projects facilitated by the OAS prove catalytic for broader reform and development,” Dr. Rahming said. “For many of the smaller member States, the OAS is one of the few institutions where there is accessibility, particularly for development projects. The OAS will always have a primary responsibility for hemispheric agenda setting across the Inter-American system and must, therefore, focus on developing strategic partnerships and tangible connections between PAHO, IDB, and the Inter-American Institute for Cooperation in Agriculture(IICA) and find some meaningful link with other regional bodies such as CARICOM.”

Dr. Rahming also recommended that the OAS “must redouble its efforts in areas where the institution has a clear comparative advantage but must also hasten its steps to think outside of the box and not place itself in the straitjacket of safeguarding the status quo.”

He added, “My delegation has recommended three areas where we see policy focus by the OAS Secretariat as helping to meet real needs of Member States: 1) advocating for enhancing access to aid and affordable development finance; 2) support for implementation of action to mitigate and adapt to climate change and 3) developing partnerships to enhance education and human development in respective Member States.

“The elevation of the development focus within this Organization to a substantive Council with executive status within the Secretariat was not by accident. Integral development is the precursor that sustains a vibrant democracy that facilitates security and strengthens human rights. We must continue to give the work of sustainable development within the OAS the prominence and focus that it deserves.”

Dr. Rahming assured Member States that they “can count on my delegation’s support and commitment to help the OAS effectively carry out its role in helping Member States advance the SDG’s and, in the process, create the hemisphere we all want.”

His Excellency Dr. Elliston Rahming, Bahamas Ambassador and Permanent Representative to the United Nations and the Organization of American States (OAS), addressing the joint meeting of the Permanent Council and the Inter-American Council for Integral Development (CIDI) of the OAS on Friday, February 24, 2017. 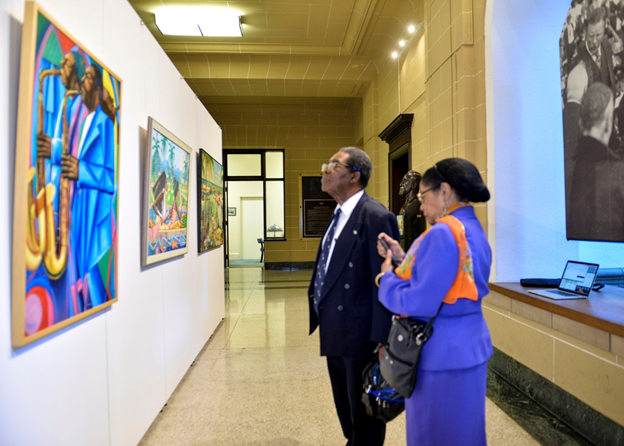 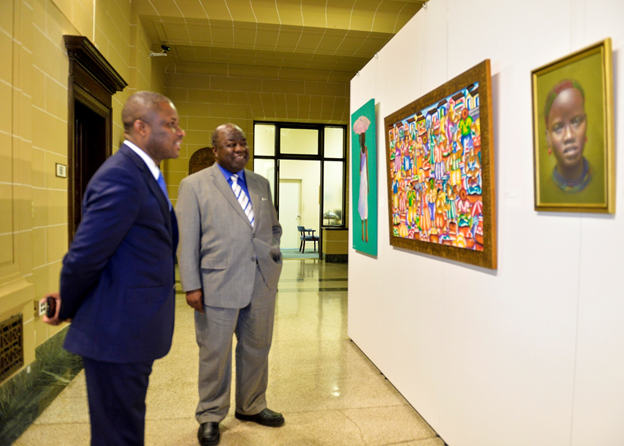 WASHINGTON, D.C. — The Organization of American States (OAS) joined the celebration of “Black History Month and the International Decade for People of African Descent” with a celebration on “Afro-Inspired Culture in the Americas” on Thursday, February 23, 2017, in the Hall of the Americas at OAS headquarters, 17th Street and Constitution Avenue, N.W.

The event featured several specialists on the influence of African culture in the Americas, including Demont Hussey, from Jamaica, who spoke about the history of reggae music; James Lovell and Vincent Martinez of Belize, who played Afro-Garifuna jazz music; Von Martin, from Trinidad and Tobago, who spoke about the history of the Trinitarian drums; Dr. Miguel Vilar, from National Geographic’s “Ancestral Discoveries” team, who presented the testimony of Henry Jímenez, who in 2016 took the DNA test kit; and Music and dance performances such as the Steel Pan Trinitarian Drums and the Congo Dance.

As part of the celebration, an art exhibition was inaugurated at the Marcus Garvey Cultural Hall. The exhibition displayed works of art on loan from, among others, the Permanent Missions of Belize, Costa Rica, Guyana, Haiti, Jamaica, Nicaragua, Trinidad and Tobago, and Uruguay, as well as the Permanent Observer Mission of France and staff of the OAS General Secretariat. The exhibition is open to the public until February 28.

His Excellency Dr. Eugene Newry, Bahamas Ambassador to the United States, and his wife Mrs. Francoise Torchon Newry view an art exhibition in the Marcus Garvey Cultural Hall of the OAS that inaugurated on Thursday, February 23, as part of the OAS celebration of “Black History Month and the International Decade for People of African Descent.”

CAPTION TWO
His Excellency Dr. Elliston Rahming (right), Bahamas Ambassador and Permanent Representative to the Organization of American States (OAS), and His Excellency Jean-Victor Harvel Jean-Baptiste, Ambassador and Permanent Representative of Haiti, view the art exhibition in the Marcus Garvey Cultural Hall of the OAS that inaugurated on Thursday, February 23, as part of the OAS celebration of “Black History Month and the International Decade for People of African Descent.”