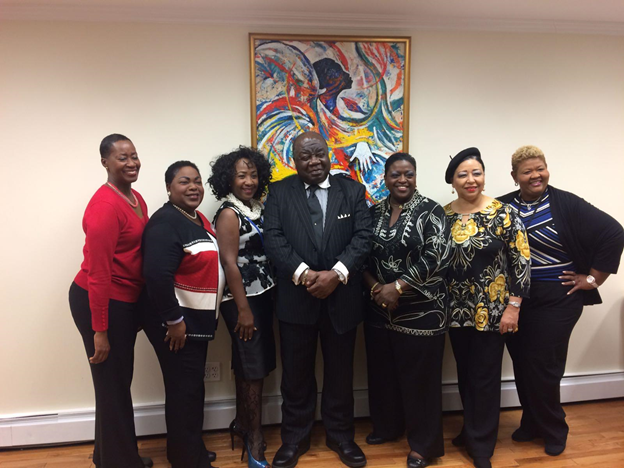 UNITED NATIONS, New York – Grand Bahama delegates at the Sixty-First Session of the Commission on the Status of Women (CSW61), which commenced on Monday, March 13, 2017 at the United Nations Headquarters in New York, are pictured at the opening reception on March 13 with the Hon. Melanie Griffin, Minister of Social Services and Community Development, and His Excellency Dr. Elliston Rahming, Bahamas Ambassador and Permanent Representative to the United Nations and the Organization of American States (OAS). CSW61 is the principal global inter-governmental body concerned with gender equality and women’s economic empowerment. Minister Griffin headed The Bahamas delegation and delivered a statement on behalf of The Bahamas on Wednesday, March 15. Pictured from left to right: Ms. Charisse Brown, Ms. Ethyl Burrows, Ms. Karen Ferguson-Bain, Ambassador Rahming, Minister Griffin, Justice Petra Hanna-Weekes, and Ms. Patrice Johnson. 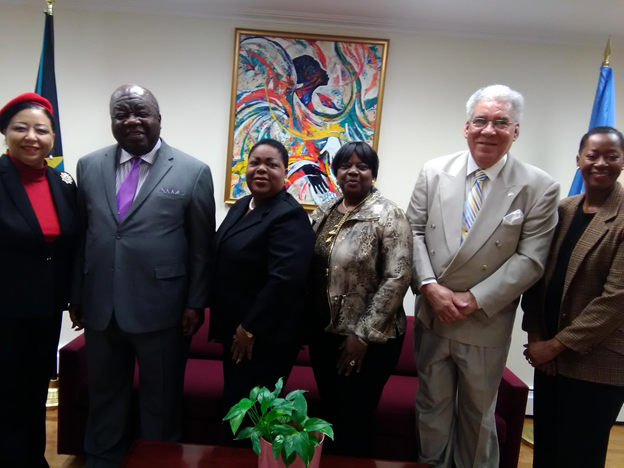 NEW YORK — Executive members of the Grand Bahama Branch of the International Federation of Women Lawyers (FIDA) paid a courtesy call on His Excellency Dr. Elliston Rahming, Bahamas Ambassador and Permanent Representative to the United Nations and the Organization of American States (OAS), and the Hon. Forrester Carroll, Bahamas Consul General to New York, on Friday, March 17, 2017, at Bahamas House, 231 East 46th. Street.

During the call, FIDA members Ms. Jethlyn Burrows, Justice Petra Hanna-Weekes and Ms. Charisse Brown, who are part of The Bahamas delegation to the Sixty-First Session of the Commission on the Status of Women, still ongoing at United Nations Headquarters in New York, offered information about their organisation. They noted that the mission of FIDA, a non-governmental organisation (NGO) with consultative status with the Economic and Social Council of the United Nations, is to enhance and promote the welfare of women and children, the study of comparative law, and the principles and aims of the United Nations in their legal and social aspects.

This year, because it currently holds the chair of the President of FIDA, The Bahamas will host the international convention of the FIDA. Held every three years, it is anticipated that this international event will attract hundreds of women attorneys world-over to gather in Freeport, Grand Bahama, from 13-17 November 2017.

During the international convention, members traditionally make recommendations, embodied in resolutions, which are thereafter published in FIDA periodicals and circulated to be acted upon by its members in their respective countries. The conventions also provide FIDA members the opportunity to network and to formulate policies towards strengthening the organisation.

Ambassador Rahming and Consul General Carroll provided advice and offered assistance to the FIDA members relative to arrangements for the holding of the international convention in The Bahamas. 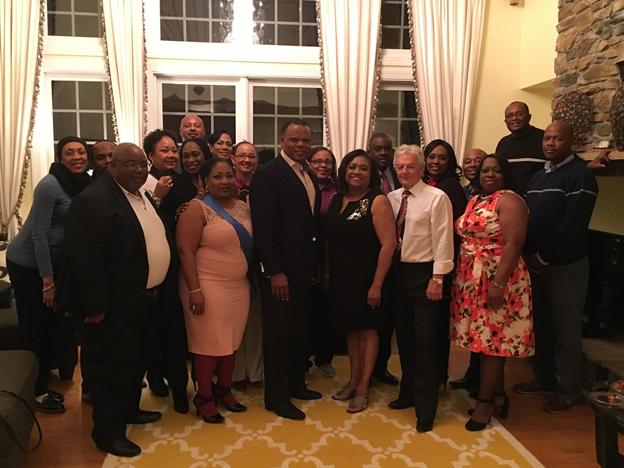 WASHINGTON, D.C. — Ms. Paulette Zonicle, Bahamas Consul General to Washington, D.C., hosted a dinner on Sunday, March 19, 2017, at her residence in Fort Washington, Maryland, for a group of insurance executives from The Bahamas who are attending GAMA’S annual Leadership and Management Program (LAMP) conference at the Gaylord National Resort and Convention Centre in Oxon Hill, Maryland, near Washington, D.C. The LAMP conference, being held from March 19 to March 22, involves more than 3,000 field leaders and industry executives representing the most recognized insurance, investment, and financial services companies from around the world. Representatives from The Bahamas include managers and executives from BAF Financial & Insurance (Bahamas) Limited and Colina Insurance Limited. They are pictured above at the dinner with Consul General Zonicle (third from right in front row). 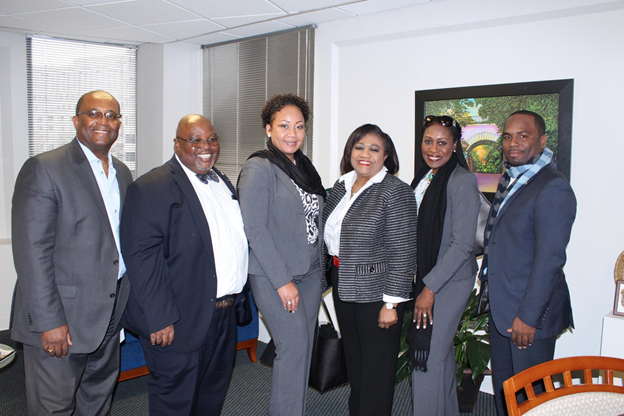 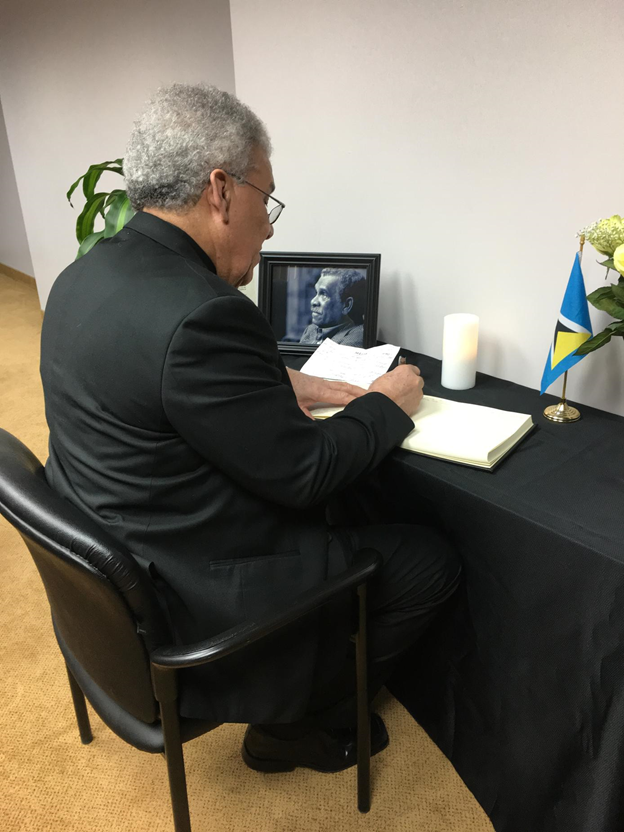 NEW YORK — The Hon. Forrester J. Carroll, Bahamas Consul General to New York, is pictured signing the Book of Condolences for former renowned Saint Lucian poet and playwright Sir Derek Alton Walcott, SLC OBE, OCC, at the Consulate General/Permanent Mission of Saint Lucia to the United Nations, 800 Second Avenue, on Tuesday, March 21, 2017. Sir Derek, who won the 1992 Nobel Prize for Literature, passed away at his home in Saint Lucia on Friday, March 17, 2017, at the age of 87. 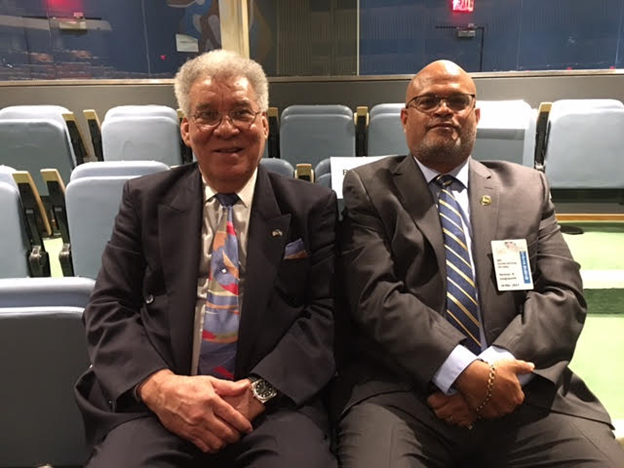 NEW YORK — The Hon. Forrester J Carroll, Bahamas Consul General to New York, and colleague Consuls General from CARICOM attended the United Nations General Assembly Commemorative Meeting for the International Day of Remembrance of the victims of slavery and the Transatlantic Slave Trade on Friday, March 24, 2017. This marks the 10th Anniversary of both the International Day and the UN Department of Public Information’s Remember Slavery Program. The theme for the 2017 commemoration is, “Remember Slavery: Recognizing the legacy and contributions of people of African Descent.” Consul General Carroll (left) is pictured with the Hon. Herman R. Longworth, Consul General of Belize to New York. 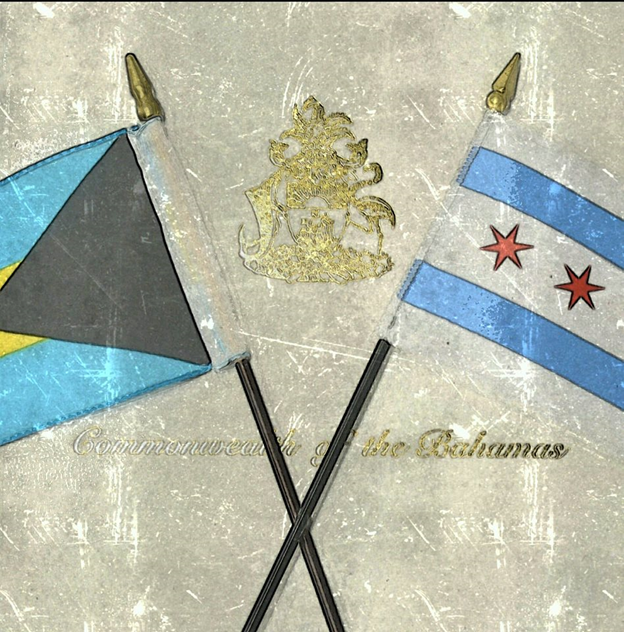 This communication is provided to ensure your knowledge of upcoming events as well as provide you the opportunity to participate in the ongoing dialogue with our local community. Please sign up for our WhatsApp network titled Bahamas National Association of Chicago (BNAOC) at 1(630)687-4850. The BNAOC is coordinated by Dianna Walkine, Vice President of the Bahamas Association Chicago, who will be delighted to add you to the growing group of local Bahamians. The BNAOC is your source for up to the minute updates and valuable information.

The monthly general meeting of the Bahamas Association Chicago will be held this Saturday, March 25th, 2017, at Calvary Redemption Centre, 8256 Skokie Blvd, Skokie IL. 60077. The meeting will start promptly at 3:00pm. Early arrival is strongly recommended to ensure you receive important updates.

Cyril Jervis, President of the Bahamas Association Chicago, will briefly cast the vision for the rest of the year and reiterate some of what was expressed in his speech from the Installation Banquet. Should you have any concerns regarding the upcoming meeting please feel free to contact Cyril Jervis (CJ) directly at 1(224)730-0925?

We will have a great time, and traditional Bahamian food will be served immediately following the meeting. We look forward to hearing from you and seeing you soon. Please share with any Bahamians you know.

PrevPreviousTHIS WEEK IN THE BAHAMAS (20 – 24 MARCH 2017) COMMENTARY BY ELCOTT COLEBY
NextWHAT IS IT WITH THIS NEW US GOVERNMENT?Next