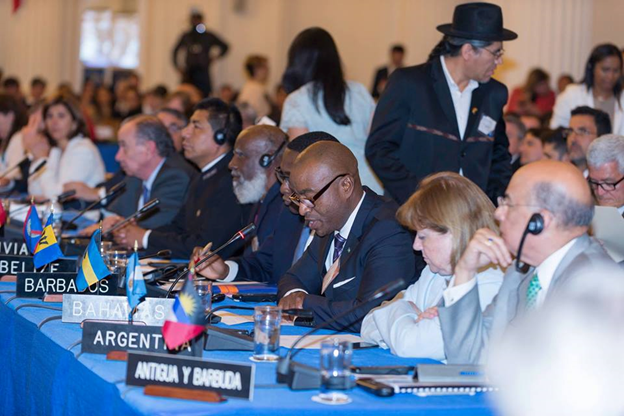 Washington DC — Minister of Foreign Affairs, the Honourable Darren Henfield, delivering a statement on behalf of CARICOM at the 29th Consultative Meeting of OAS Foreign Ministers on the Situation in Venezuela.
Photo Credit: Juan Manuel Herrera/OASBahamas 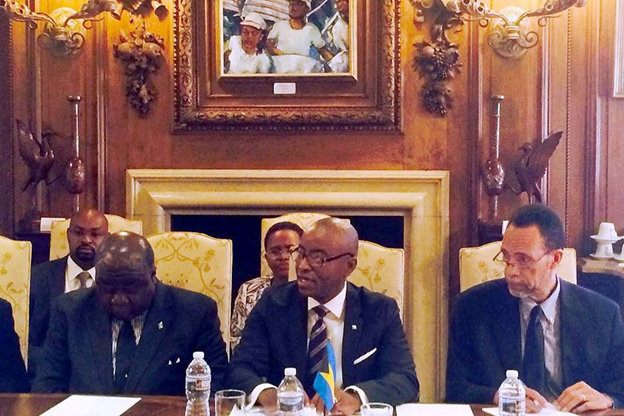 WASHINGTON, D.C. — In advance of the Meeting of Consultation of Ministers of Foreign Affairs at the OAS on May 31, 2017, Bahamas Minister of Foreign Affairs Darren Henfield (centre) presided over a preparatory caucus meeting of CARICOM Ministers of Foreign Affairs, as incoming Chair of the CARICOM’s Council for Foreign and Community Relations (COFCOR). The meeting served as an opportunity for dialogue and engagement amongst the CARICOM Ministers. At right is Assistant Secretary-General of CARICOM, Ambassador Colin Granderson, and at left is His Excellency Dr. Elliston Rahming, Bahamas Ambassador to the United Nations and the OAS. Pictured behind them are Mrs. Sharon Brennen-Haylock, Director General of the Bahamas Ministry of Foreign Affairs, and Mr. Chet Neymour, Deputy Chief of Mission, Bahamas Embassy.

The Ministry of Foreign Affairs has expressed The Bahamas’ concern regarding the announced withdrawal of the United States from the Paris Agreement on Climate Change.

While each nation must determine its own course on international matters the prospect of the effects of climate change are particularly significant for low-lying, coastal, Small Islands States (SIDS) such as The Bahamas, whose very existence stand to be adversely impacted by climate change and global warming.

The Bahamas remains committed to the Paris Agreement which was signed by 195 Parties and ratified by 146 countries plus the European Union, and its aspiration to reduce risk to economies and lives everywhere, and to build a secure and sustainable world.

The Bahamas will continue to work with its partners in the context of the Paris Agreement, as well as its neighbours in the United States in ongoing efforts to mitigate the long-term effects of global weather on states in the region.