LEADER OF THE OPPOSITION’S BUDGET STATEMENT 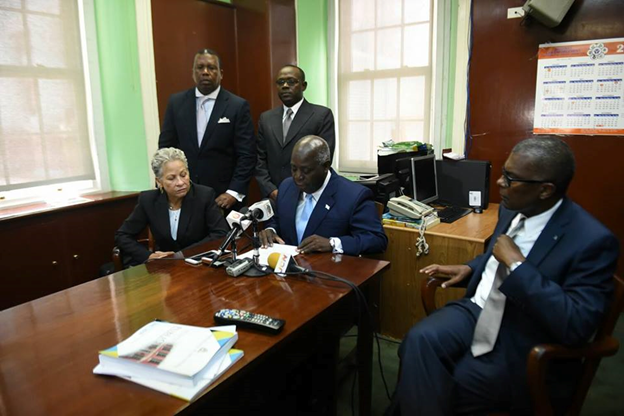 The Budget statement should be an outline of the legislative measures which the Government plans to take to improve the revenue and expand the economy not a forum for political bashing and biased posturing.  The Government must get on with the business of governing.

It is also shocking that the FNM government is within its first weeks in office borrowing an unprecedented 722 million dollars to run the business of the Government.

When you look dispassionately at the budget statement, you will discover that the statement reveals and is an admission that the fundamentals of our economy were prudently managed and a solid foundation laid for growth. This is evidenced amongst other things by the International Monetary Fund (IMF) that predicts that this year the economy will grow by 1.4 per cent and will be followed by a 2.2 per cent growth in 2018. Indeed the Government itself is predicting 3.3 per cent growth for next year, which must be a testament to the prudent management of the PLP Government.

In the Government’s efforts to make political points, the Free National Movement has to be very careful not to talk down this economy to the harm of the national interest.  The Budget statement appears to do just that.  A responsible government must outline the facts as they are but must always give a people hope that there are better days are ahead.  This statement today is disappointing in that it appears to offer no hope for the future, just bashing the PLP about its past stewardship and indicating that it will be cutting back further into the growth prospects of the economy.

We ask the FNM since they are attacking the PLP’s record and promoting their own history on the economy how they square the rosy descriptions of their performance, with the Prime Minister then Leader of the Opposition saying that the economy in 2012  was left by the FNM in a wheel chair.  In other words, in a substantially disabled state.

Let us look at some specifics that they provided. The comment on the outturn to 500 million, the Minister answered his own point as to why the prediction of the PLP on the deficit was off target.  The Hurricane was responsible for it by his own statement.  It is not mismanagement at all.  He said the combination of increased expenditure to fix the public infrastructure and repair homes as well as reducing the taxes caused the increase.

Their own projections this year can similarly be impacted by one hurricane.

The bottom line seems to be here that the FNM made wild promises based on a lack of understanding of the economy in which they operate.  Now that they are in the government they have to face the reality.  The FNM is seeking to provide a false narrative to provide a cover for the fact that they cannot live up to what they promised in the general election.

We again urge them to be extremely careful how they talk down this economy so that they do not make the last state worse than the first.  The fact is the Government is the largest spender in this economy.  If the government contracts its spending, then the economy of this country gets into deep trouble. We again say to the government be very careful.

We also heard nothing for Grand Bahama except to repeal the present act which provides incentives to the businesses in Grand Bahama.  Grand Bahama is in urgent need of an economic infusion and not talk of repeal.

The interesting aspect of this statement is that the situation is so grave but they are able still offer tax relief.  But we notice that the talk of eliminating VAT has not materialized.

We are again registering our concern that there is no good news for the poor in this Budget and during the debate we will take up the mantle for the poor.

We look forward to a vigorous debate on the statement.

PrevPreviousTHE WORK OF THE MISSIONS ABROAD
NextMINNIS (VICTIMIZER IN CHIEF)Next