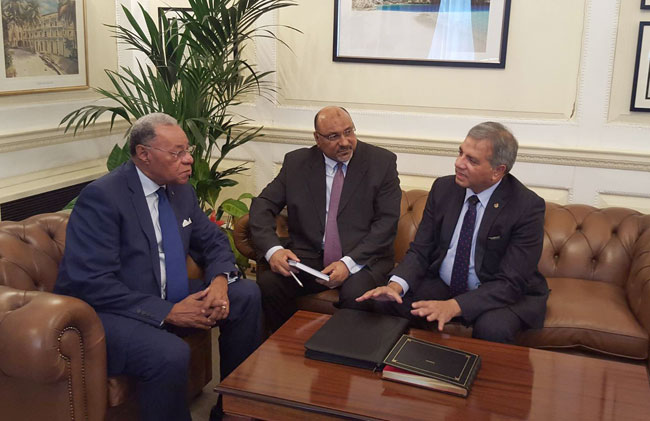 In recently taking up his post in 2015, Captain Ahmed outlined the mandate of IMSO along with goals and objectives for 2016. Captain Ahmed gave an update on the workings of the Global Maritime Distress Safety System (GMDSS) and discussed the way forward on keeping and reducing the operational cost of the Long Range Identification and Tracking System (LRIT).

The International Mobile Satellite Organization (IMSO) acts as the LRIT Coordinator, appointed by IMO to ensure the operation of the international system for the Long Range Identification and Tracking of Ships (LRIT) worldwide by auditing and reviewing the performance of the system.

IMSO is the inter-governmental organization whose primary purpose is the oversight of certain public satellite safety and security communication services provided by mobile satellite communication systems. 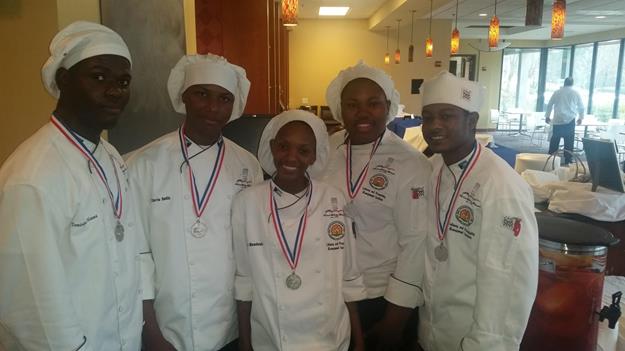 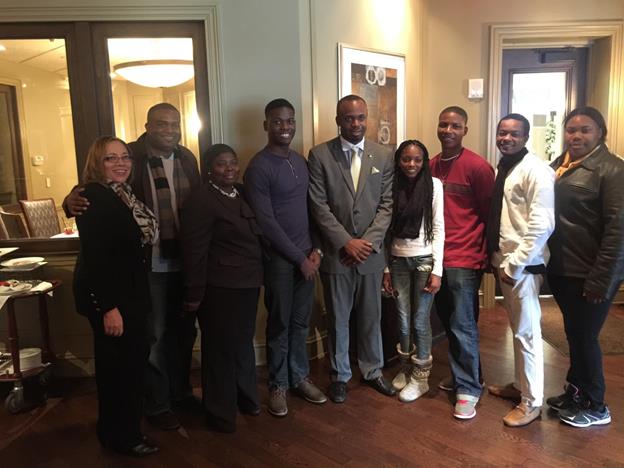 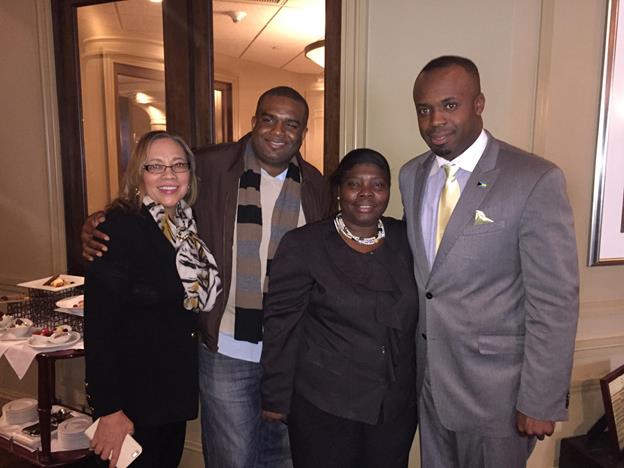 ATLANTA, Georgia — A culinary team from the College of the Bahamas (COB) won a silver medal at Southeast Regional Culinary Competitions held at Le Cordon Bleu College of Culinary Arts in Atlanta January 29-31, 2016.

Bahamas Consul General to Atlanta Randy Rolle attended the competition as well as a luncheon hosted for the group by Mrs. Jeanne S. Hollis, co-founder of Poitier Global Training Institute, at the Davios Northern Italian Steakhouse in downtown Atlanta on Friday.

In a follow-up email, Dominique Hanna thanked the Consul General “on behalf of the team for taking time out of your schedule to meet with us, while we are here in Atlanta preparing to compete in the Southeast Regional, American Culinary Federation competition.”

Mr. Hanna, 22, graduated from COB with an Associate Degree in Culinary Arts and is currently studying for degree in Hotel Management.

The team’s coach was Chef Addiemae Rolle-Farrington, Instructor, Apprentice, Cook Coordinator COB – CHMI, and other members included Jannae Meadows, 21, who has an Associate Degree in Culinary Arts and is currently pursuing a Bachelor’s in Hospitality Management; Aliea Rolle, a 20-year-old Junior, whose goal is to become the owner of a Villa Restaurant; and Rachelle Strachan, a 22-year-old third-year student and chef at Eating Vegan Delights Restaurant.

The team was accompanied by Chef Mario Adderley, CC, MBA, an assistant professor and Head of Department for Food & Beverage at The College of the Bahamas, Culinary and Hospitality Management Institute.

CAPTION ONE
Members of the COB culinary team that won a silver medal at Southeast Regional Culinary Competitions in Atlanta are from left to right: Dominique Hanna, Corrie Smith, Jennae Meadows, Aliea Rolle and Tramaine Shaerer 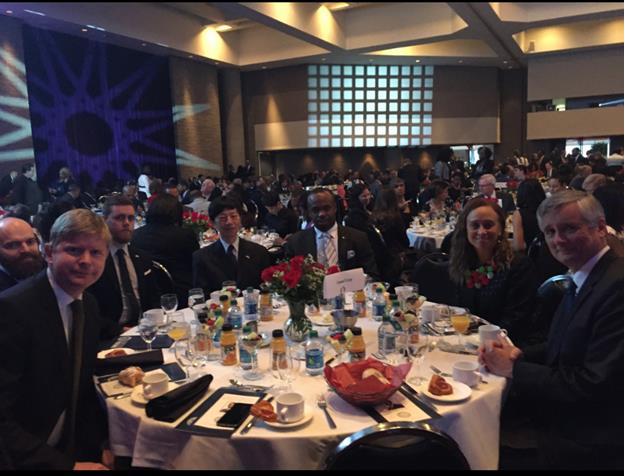 ATLANTA, Georgia — Bahamas Consul General to Atlanta Randy Rolle (center) is pictured with several other members of the Atlanta Consular Corps at the 2016 Annual State of the City Business Breakfast, during which Mayor Kasim Reed highlighted accomplishments from 2015 and discussed future initiatives, on Thursday, February 4, 2016. Held in the Thomas Murphy Ballroom of Georgia World Congress Center, 285 Andrew Young International Boulevard N.W., the event was co-hosted by Sandy Douglas, President of Coca-Cola North America, and brought together business, community, faith and non-profit leaders to hear the “state of the city” from Mayor Reed. 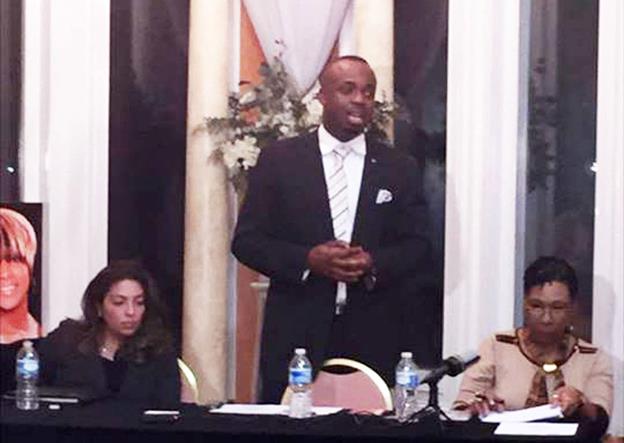 WASHNGTON, D.C. His Excellency Dr. Elliston Rahming, Bahamas Ambassador to the United Nations and the Organization of American States (OAS), and His Excellency Dr. Eugene Newry, Bahamas Ambassador to the United States, on Thursday, February 4, 2016, met with Director Maryse Roberts and Ms. Renee Penco of the OAS Department of Economic Development to discuss assistance towards the potential establishment of a Small Business Development Centre (SBDC) in The Bahamas.

The OAS Project to help expand the US’s Small Business Development Centre (SBDC) model throughout the Caribbean is funded by the US OAS Mission. The initial phase of the project was launched in 2012 and was executed in five countries: Barbados, Belize, Dominican, Jamaica and Saint Lucia. 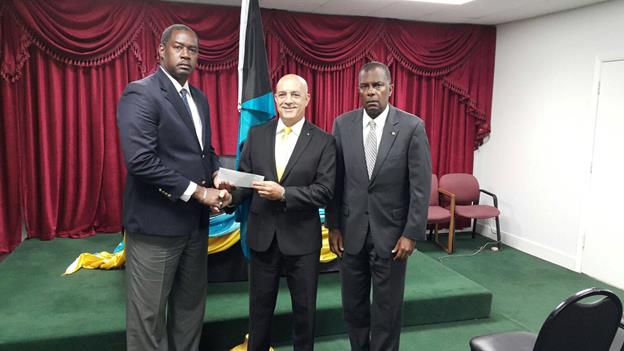 Foreign Minister Fred Mitchell with Captain Stephen Russell of The National Emergency Management Agency (NEMA) for presentation of a cheque for hurricane relief from the Bahamian community in South Florida. Consul General Ricardo Treco made the presentation at Immigration HQ 1st February.