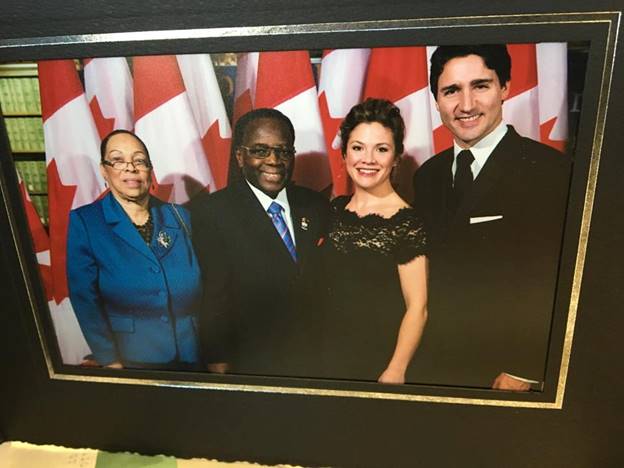 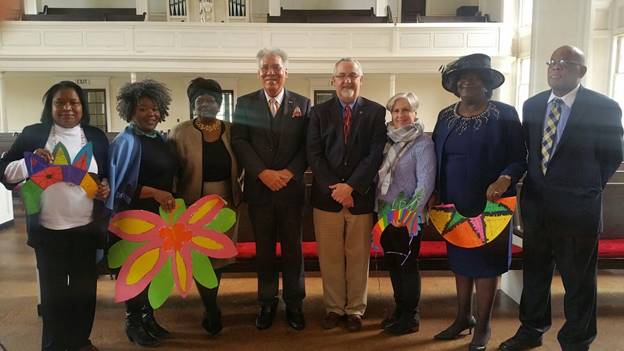 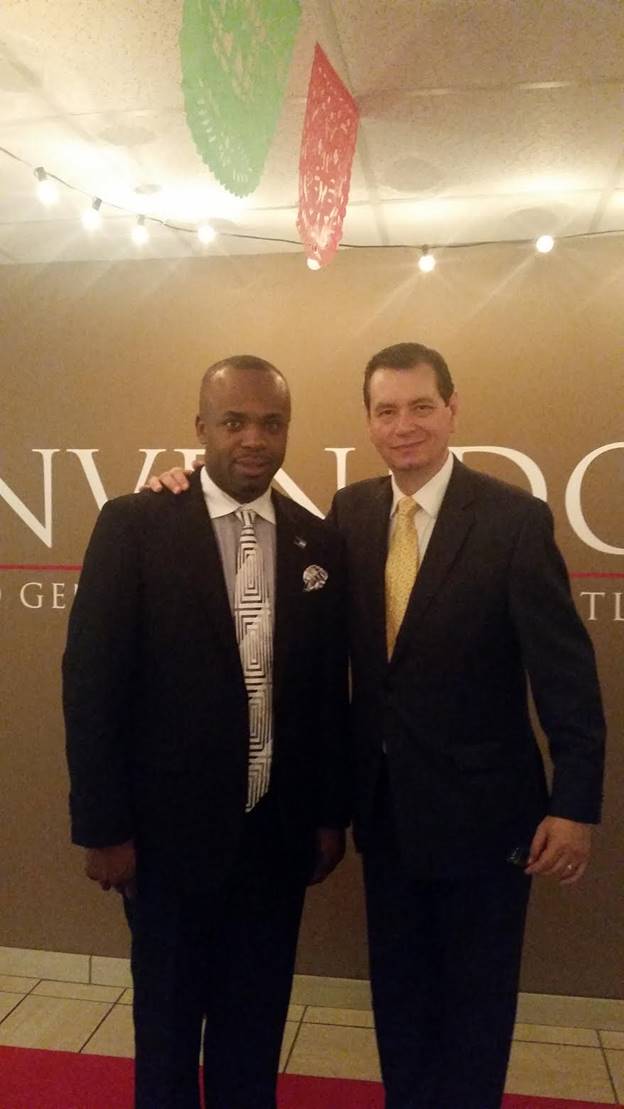 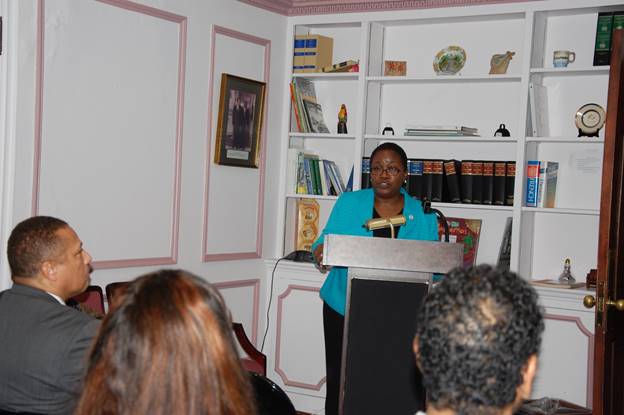 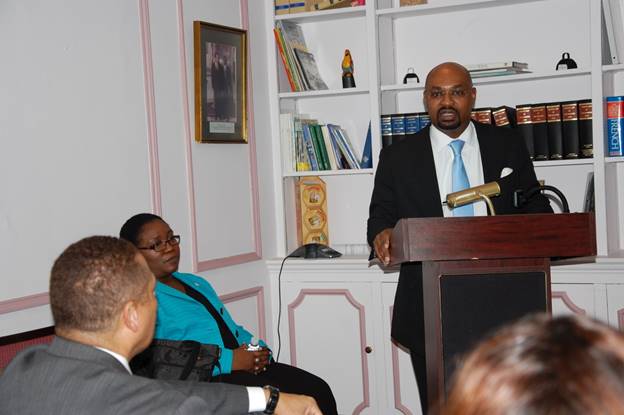 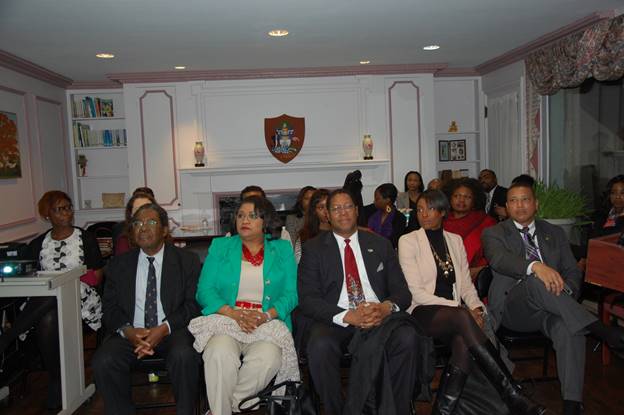 WASHINGTON, D.C. – Dr. Nicola Virgill-Rolle, Director of Economic Development and Planning in the Office of the Prime Minister, presented comprehensive details about the proposed Bahamas National Development Plan: Vision2040 during an address in the conference room of the Embassy of the Bahamas, 2220 Massachusetts Avenue, N.W., on Wednesday night, February 24, 2016.

The event was held under the patronage of His Excellency Dr. Eugene Newry, Bahamas Ambassador to the United States, and was presented in a format similar to the “YOUNG BAHAMIANS CONVERSATION SERIES” launched by the Embassy last year to provide a forum “for young Bahamians in the diaspora to present and dialogue on their research or work and cultivate ideas for the betterment of The Bahamas.”

Assisted Ms. Samantha L. Rolle, Programme Manager for the National Development and Planning Unit, who supervised a PowerPoint screened presentation of the various aspects of the Plan, Dr. Virgill-Rolle spoke for more than an hour, after which members of the audience that included Bahamians in the Diaspora and Bahamian students attending Washington-area universities elicited more information on the Plan during a lively Question and Answer session.

The National Development Plan: Vision2040 is an initiative of the Government of The Bahamas, developed in partnership with the Inter-American Development Bank and in close cooperation with the College of The Bahamas and The Bahamas Chamber of Commerce and Employers Confederation (BCCEC).

When it was announced last year, it was envisaged that the National Development Plan would  provide a long-term road map for the development of The Bahamas with short, medium and long term goals and strategies for achieving a more vibrant and resilient Bahamas.

At the time it was noted that The Bahamas had lacked a comprehensive and publicly discussed long-term strategy for the country’s economic development since its independence. It was also noted that while some sectors had medium term strategies, the absence of a national strategy led to an ad hoc prioritization of policies, programmes and investment projects without a clear, long-term roadmap for development.

It was further noted that the development of a long-term economic strategy would be integrated into the operational plans of the Government and ultimately guide the budgeting process. Finally, the development of a National Economic Development Plan could address the issues of institutional fragmentation, inefficiencies and inconsistencies in both government and foreign investment decisions by providing a framework to identify priority projects.

CAPTION
Dr. Nicola Virgill-Rolle, Director of Economic Development and Planning, speaking on the proposed Bahamas National Development Plan: Vision2040 in the conference room of the Embassy of the Bahamas Wednesday night. 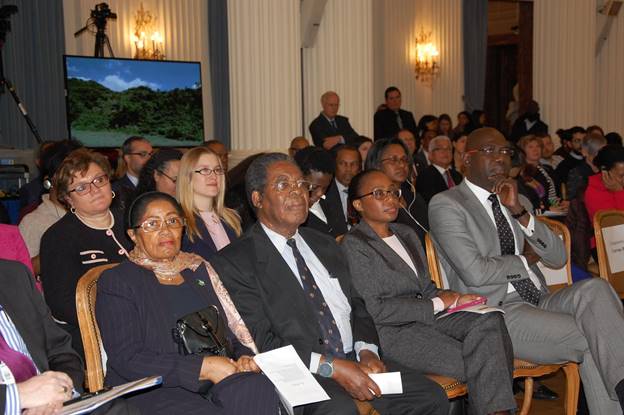 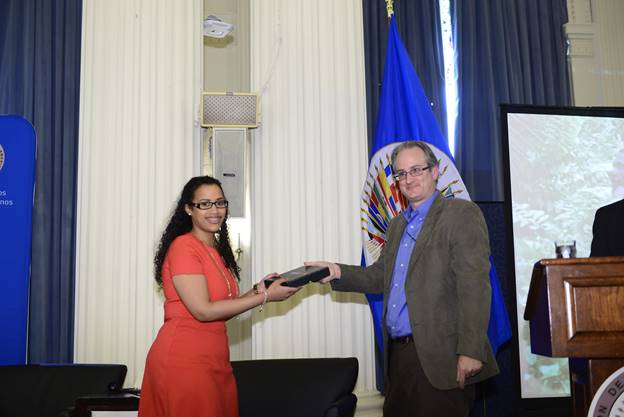 WASHINGTON, D.C. — The Organization of American States (OAS) hosted a lecture on “The Afro-Diaspora in the Americas” as part of the celebrations of Black History Month and the International Decade for People of African Descent .on Thursday, February 25, in the Hall of the Americas at the OAS headquarters at 17th Street and Constitution Avenue, N.W.

The Bahamas was one of the seven countries along with National Geographic Magazine that were recognized as the primary sponsors of the event, with Miss Tracee Dorestant, Second Secretary/Vice Consul and Alternate Representative to the OAS, representing The Bahamas on the organizing committee.

The event, which was very well attended, included a welcoming message from OAS Secretary General Luis Almagro; an address on Black History Month at the OAS by Assistant Secretary General Nestor Mendez; a presentation by Miguel Vilar, Science Manager for National Geographic’s Genographic Project; an update on the work of the OAS working group on Afro-descendants by H.E. Andres Gonzalez, Permanent Representative of Columbia to the OAS; an address on “The Afro-Diaspora in the Americas” by Mr. Jesus Alberto Garcia, Consul General of Venezuela in New Orleans; an address by H.E. Bocchit Edmond, Permanent Representative of Haiti to the OAS; and closing remarks by Ambassador La Celia A. Prince, Chief of Staff of Assistant Secretary General Nestor Mendez and former Ambassador of St. Vincent and the Grenadines to the United States.

A common thread among all of the presentations were references to the rich history of Afro-descendants in the Americas.

As Ambassador Prince noted in her closing remarks, “The presenters have left us with a wealth of information today: We heard the historical context which gave rise to the recognition for Black History Month; we heard of the ongoing challenges and struggles against discrimination; and we also learned of work being done in the field of science to bring to life the history of our ancestry; an ancestry which shows our inter-connectedness.”

National Geographic’s Scientific Data Manager Dr. Vilar presented each member of the organizing committee with the magazine’s Genographic Ancestry Test Kits, and Ambassador Prince told the recipients that they were “on a wonderful path of self-discovery” which  “for some people can be cathartic, and even empowering.”

“Migration–both voluntary and forced — has been a global phenomenon for hundreds of years,” Ambassador Prince said. “Tracing one’s roots is a fascinating journey of self-examination and for most, it is a challenge even to establish family connections beyond a generation and a half.  And particularly for Afro-descendants in the Americas, the legacy of slavery, lost parentage, economic and social disenfranchisement have made it even harder for families to document lineage which is easily identified by today’s generations.”

The former St. Vincent and the Grenadines Ambassador to the United States  said she was speaking  “from the perspective one who has been doing research into my own family tree for nearly 20 years, arriving at many dead ends, and left with numerous questions unanswered.”

“Although those links on my family tree may never be found, my experience having taken the Genographic test last year has been profoundly enriching,” Ambassador Prince said. “Since taking the Genographic test, I no longer wonder or speculate from whence came my ancestry; I now know. I now know that my ancestry comes from three continents and that the dominant part of my genetic make-up is firmly rooted in the Luyha and Bantu-speaking peoples of Kenya. Awareness– self-awareness–is elemental to identity, and identity elemental to empowerment.”

She added, “The Smithsonian’s National Museum of African American History and Culture, which will be inaugurated in September of this year by the United States’ first Black president, is also something to look forward to, which will help preserve the legacy of the Afro-Diaspora in this country.

“At the OAS, Secretary General Luis Almagro has mandated a central theme for his Administration and that is: more rights for more people. And he has also been an ardent advocate for more social inclusion. It is very meaningful, particularly to the Assistant Secretary General and the seven countries co-sponsoring today’s event, that National Geographic has partnered with the OAS, at a time when this Organization is about to embark on elaborating a Plan of Action for the International Decade for  People of African Descent.”

Ambassador Prince encouraged the eight recipients of the Genographic test kits “to share their results with us so that it can be a subject of discussion within the Working Group elaborating the Plan of Action.”

“Our work here at the OAS must aspire to remain true to the three pillar foundation on which the United Nations has crafted the International Decade for people of African descent, i.e. (I) recognition, which includes awareness and inclusion (ii) Justice, and (iii) the right to development and measures against poverty,” she said. “Once again, let me thank the co-sponsors of this event: The Bahamas, Colombia, Haiti, Jamaica, Nicaragua, The United States and Venezuela, along with support from Canada, for bringing Black History Month to the OAS for the first time. Our thanks to National Geographic and Global Political Solutions, and of course, the test kit recipients for their participation.”

Following the lecture, a reception was held featuring Afro-inspired cuisine and entertainment by Afro-inspired music from the countries of the Americas.

CAPTION
Attentively listening to one of the speakers at “Afro-Diaspora in the Americas” lecture at the OAS on Thursday are, from left to right: Mrs. Francoise Torchon Newry; His Excellency Dr. Eugene Newry, Bahamas Ambassador to the United States; Ms. Julia Hyatt, Minister/Alternate Representative, Permanent Mission of Jamaica; and Jean Josue Pierre Dahomey, Minister/Counselor, Permanent Mission of Haiti. 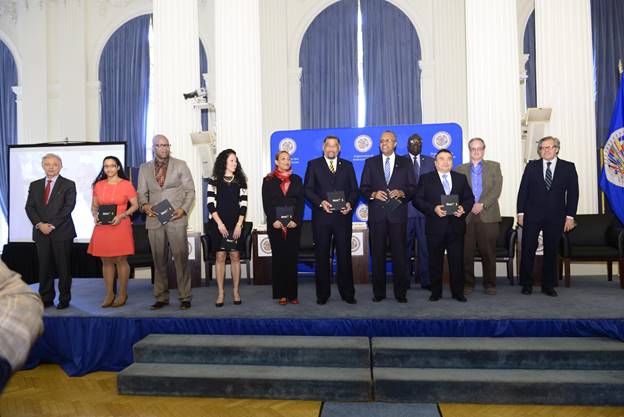