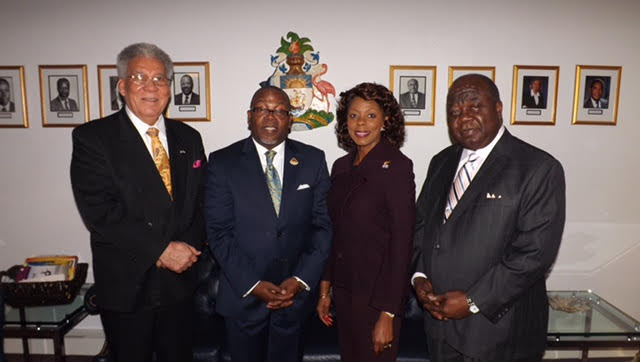 NEW YORK — His Grace Bishop Neil C. Ellis and the Global United Fellowship, in conjunction with The Permanent Mission of The Commonwealth of The Bahamas to the United Nations and the Engr. Eze Foundation, are hosting an historic summit at the United Nations headquarters in New York City on Wednesday, March 2, 2016.

Bishop Ellis, Presiding Bishop of Global United Fellowship, will be the principal keynote speaker at the summit, which will offer a balanced presentation of keynote addresses, feature presentations by renowned experts in their respective fields, and strategically targeted panel discussions between global leaders in the fields of finance, economics, antipoverty initiatives, anti-terrorism, social justice, extremism, and millennialist cultural change.

It is designed to provide a general introduction to, and activate greater support of, The United Nations Sustainable Development Goals targeting poverty, economic growth, peace, and justice, as outlined in Goals Number 1, 8, 16 & 17. Special attention will be given to discussion of the expanding, essential and significant role of religious reformations in promoting multicultural understanding, reconciliation and peace around the globe.

According to a Global United Fellowship release, a key objective of the summit is “to build bridges of faith and a climate of peace between diverse religions and cultures, while fostering deep understanding of the issues stemming from the Middle East, the global threat of terrorism and the expanding interdependence of global economies.”

His Grace Bishop Neil Ellis, Presiding Bishop of Global United Fellowship, and Lady Patrice Ellis, who are in New York for the “Summit at the United Nations,” are pictured with H.E. Elliston Rahming (right), Bahamas Ambassador to the United Nations and the Organization of American States (OAS) and the Hon Forrester Carroll (left), Bahamas Consul General to New York, during a courtesy call on Ambassador Rahming. 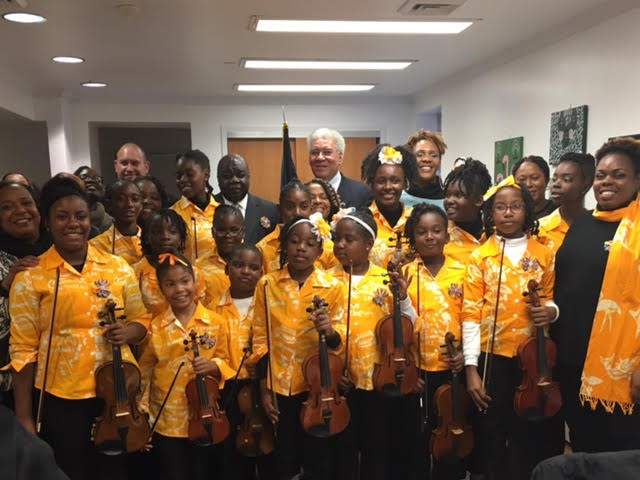 NEW YORK — His Excellency Dr. Elliston Rahming (back row center-left), Bahamas Ambassador to the United Nations and the Organization of the American States (OAS), and the Hon. Forrester Carroll (back row center-right), Bahamas Consul General to New York, are pictured with members of String City Violinists, from Nassau, Bahamas, who performed at the United Nations on Friday, February 26, 2016. Previously known as Melodious Strings, the musical group, which consists of 27 young violinists between the ages of 5 and 14, was formed in September 2010 by Mrs. Adelia Major-Davis. They have performed numerous places in Nassau, including the Coral Towers Atlantis Hotel in Paradise Island and The Mall at Marathon. In addition, they have also performed at school events, church services, a love concert that raised funds for the Cancer Society of The Bahamas and have hosted three violin recitals. Following their performance at the UN, a reception was hosted for them by Ambassador Rahming. 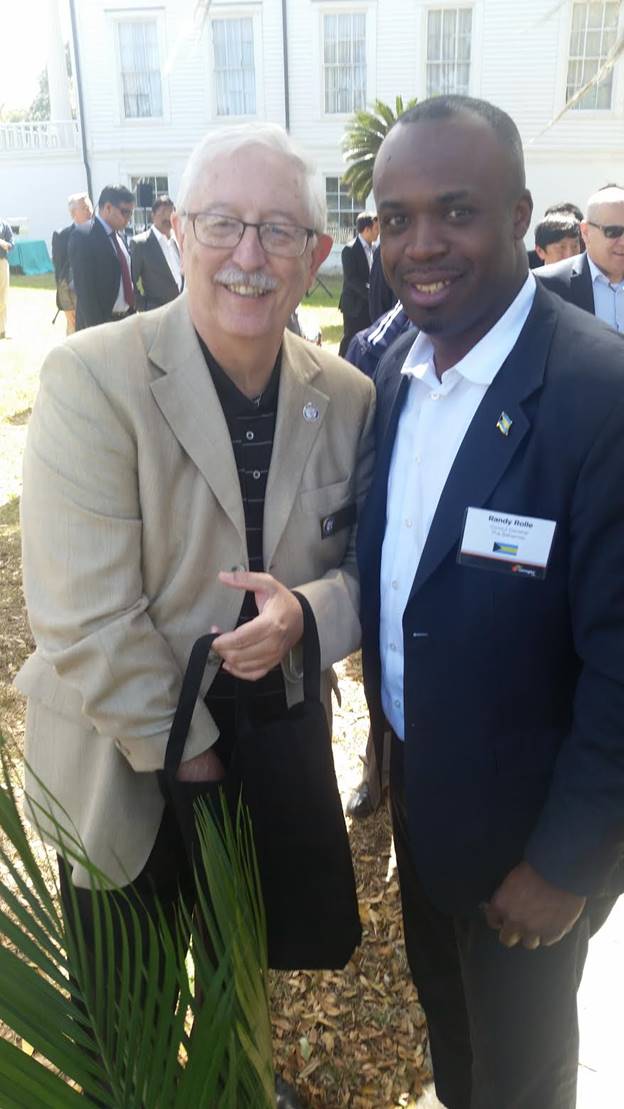 ATLANTA, Georgia — Bahamas Consul General to Atlanta Randy Rolle is among the Atlanta-based members of the Diplomatic Corps participating in the 2016 International VIP tour of the Georgia coast organized by the Georgia Department of Economic Development (GDEcD).

Participants were flown to Jacksonville, Florida, on Wednesday morning, March 2, 2016 to begin the first leg  of the tour and are due to return to Atlanta on Friday, March 4.

Described by sponsors as “the only event that brings the bulk of Atlanta’s diplomatic community together with local Georgians within their communities,” the tour includes the following communities: St. Mary’s, Jekyll Island, St. Simons Island, Ossabaw Island, Darien, Richmond Hill and Savannah.

The GDEcD is Georgia’s sales and marketing arm and is the lead agency “for attracting new business investment, encouraging the expansion of existing industry and small businesses, aligning workforce education and training with in-demand jobs, locating new markets for Georgia products, attracting tourists to Georgia, and promoting the state as a destination for arts and location for film, music and digital entertainment projects, as well as planning and mobilizing state resources for economic development,” according to a welcome letter to participants in the tour.

CAPTION
Bahamas Consul General Randy Rolle (right) being presented with a city coin by City of St. Mary’s Mayor John F. Morrissey. City of St. Mary’s was the first stop on the tour of the Georgia coast by Atlanta-based members of the Diplomatic Corps. 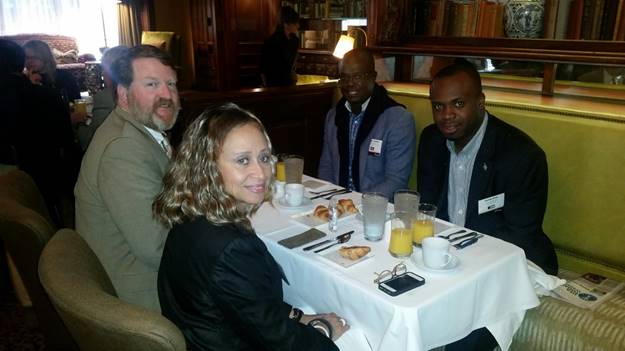 ATLANTA, Georgia — During his tour of the Georgia coast along with other Atlanta-based members of the Diplomatic Corps, Bahamas Consul General to Atlanta Randy Rolle (right) is pictured clockwise having breakfast at a restaurant in Savannah with Ms. Cynthia Blanford, Honorary Consul for Liberia; Mr. Jeffery B. Jones, Director of International Students Services for the Savannah College of Art and Design (SCAD); and Haiti Consul General to Atlanta Ghandi Thomas. SCAD offers scholarships to international students and there are presently 25 students from The Bahamas at SCAD. The tour of the Georgia coast, which was organized by the Georgia Department of Economic Development (GDEcD), began on Wednesday, March 2, and ended on Friday, March 4. In addition to Savannah, other communities visited included St. Mary’s, Jekyll Island, St. Simons Island, Ossabaw Island, Darien and Richmond Hill. 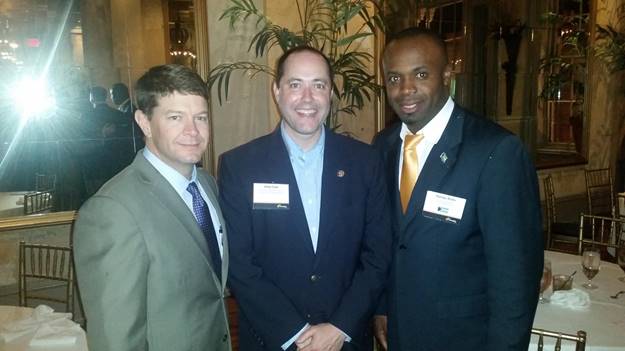