You can apply for an eTA online by visiting http://www.cic.gc.ca/ english/visit/eta.asp

The processing fee for the eTA is $7 Canadian dollars and will be valid for five (5) years after issuance or sooner if:

• Passport expires;
• Cancelled by an officer; or
• A new eTA is issued.

All Bahamian nationals who are holders of a valid temporary resident visa (student, work permit) issued after 1 August 2015 and permanent residency are exempt from obtaining an eTA.

ALL Persons with study and work permits issued before 1 August 2015 MUST apply for an eTA. 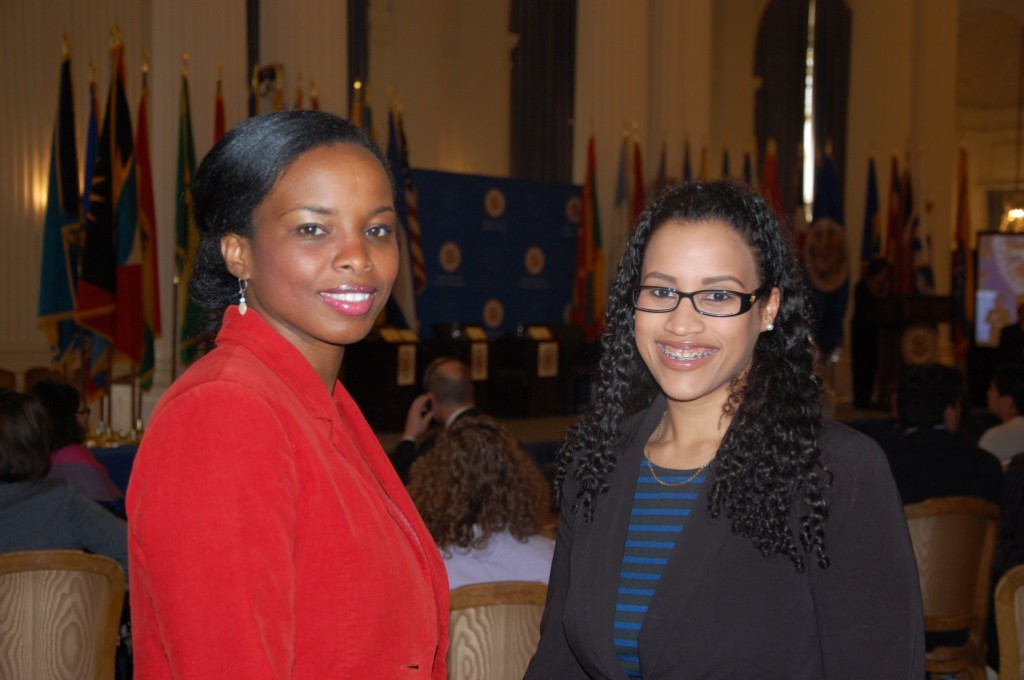 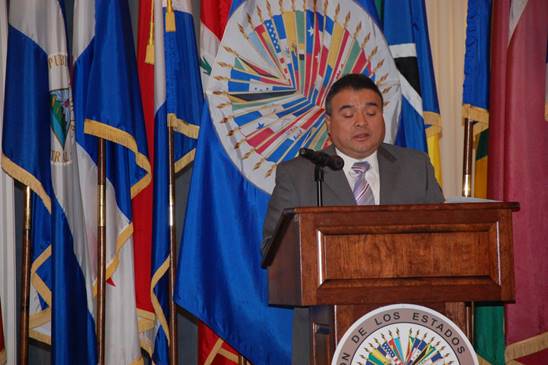 WASHINGTON, D.C. – In observance of International Women’s Day 2016, a forum was held in the Hall of the Americas of the Organization of American States (OAS) headquarters, 17th Street and Constitution Avenue, N.W, on Tuesday, March 8, under the theme, “Breaking Barriers to Justice: Ending Violence Against Women in the Americas.”

The Mission of the United States to the OAS, the Mission of Canada to the OAS and the Inter-American Commission of Women (CIM) partnered to organize the “round-table event with a view to raising awareness of the importance of approaching the issues of violence against women and access to justice from a perspective of diversity.”

The forum focused on “identifying existing challenges and models in the region related to the protection of violence against women and girls, especially for those who are also members of the afro-descendant, indigenous, LGBTI, disabled and/or formerly incarcerated community,” according to the forum’s prepared program.

Miss Tracee Dorestant, Bahamas Embassy Second Secretary/Vice Consul and Alternate Representative to the OAS, was among those attending the event.

Prior to the panel discussions, opening remarks were delivered by Ms. Sarah Sewall, Under Secretary for Civilian Security, Democracy and Human Rights at the U.S. State Department, and Mr. Nestor Mendez, OAS Assistant Secretary General, who is a former Ambassador of Belize to the United States and former Permanent Representative of Belize to the OAS.

CAPTION
Miss Tracee Dorestant (right), Bahamas Embassy Second Secretary/Vice Consul and Alternate Representative to the OAS, is pictured at the International Women’s Day forum at the OAS with Ambassador La Celia A. Prince, Chief of Staff of OAS Assistant Secretary General Nestor Mendez and former Ambassador of St. Vincent and the Grenadines to the United States. 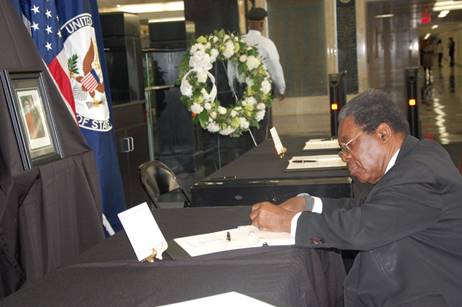 WASHINGTON, D.C. – Oh behalf of the Government and the people of The Bahamas, His Excellency Dr. Eugene Newry, Bahamas Ambassador to the United States, is pictured on Tuesday, March 8, signing the Book of Condolences at the U.S. State Department for Mrs. Nancy Reagan, First Lady of the United States from 1981 to 1989, who died at her home in Los Angeles on March 6, 2016, at the age of 94. Mrs. Reagan will be buried at the Ronald Reagan Presidential Library in Semi Valley, California, next to her husband, former President Ronald Wilson Reagan, who died on June 5, 2004. 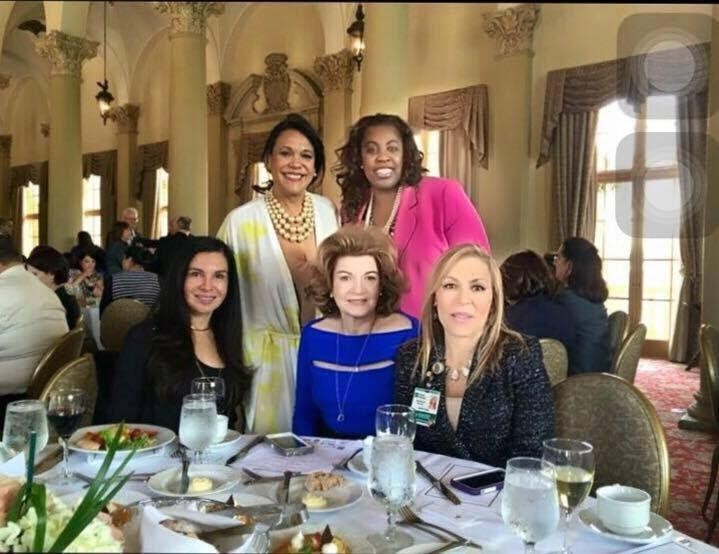 Five outstanding women leaders were honored by the World Trade Center Miami, for their significant contributions to advancing international trade, investment and business in Florida.

Delivering the keynote address was Dr. Susan Amat, CEO and founder of Venture Hive, an entrepreneurship education company that assists corporations, governments, universities, and incubator/accelerator programs. Dr. Amat spoke on the topic, “Entrepreneurial Opportunities for Women in The Americas “

Since 1975, International Women’s Day has assumed a global dimension for women in developed and developing countries. This annual celebration by the United Nations serves to focus attention on the issues facing women around the world, and highlights their achievements.

In 2014, the World Trade Center Miami began to sponsor this annual event in order to recognize Florida women who have inspired others to make major accomplishments in International Business. 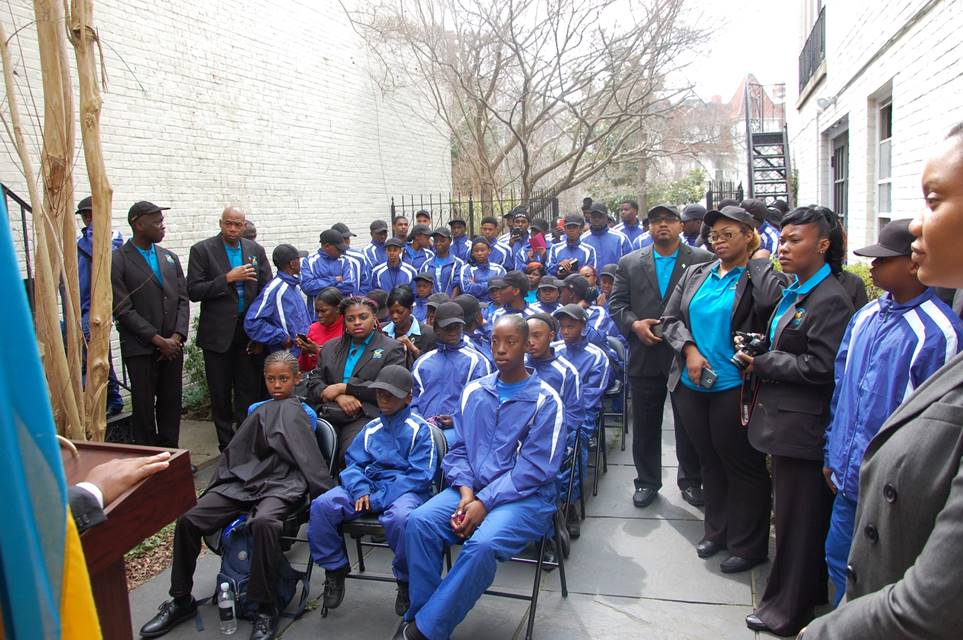 WASHINGTON, D.C. — The Bahamas Urban Renewal Marching Band will be among the groups participating in the 45thAnnual St. Patrick’s Day Parade in downtown Washington, D.C., on Sunday, March 13, 2016.

The group visited the Bahamas Embassy, 2220 Massachusetts Avenue, N.W., on Thursday, March 10, and were welcomed by His Excellency Dr. Eugene Newry, Bahamas Ambassador to the United States, and Deputy Chief of Mission Chet Neymour during brief addresses in the Embassy’s courtyard.

Ranging in ages from seven to 18, the 80 members of the band each introduced themselves and stated what instruments they play and the schools they attend, before Inspector Campbell thanked the Ambassador on behalf of Police Commissioner Elliston Greenslade.

The St. Patrick’s Parade is scheduled to begin at 12:00 Noon, and will proceed down Constitution Avenue from 7th to 17th Streets, N.W.  Over 100 marching bands, military units, dance schools, floats and a variety of other groups are scheduled to participate.

The Urban Renewal Band is scheduled to return to The Bahamas on Tuesday, March 15.