MITCHELL IN THE UNITED ARAB EMIRATES 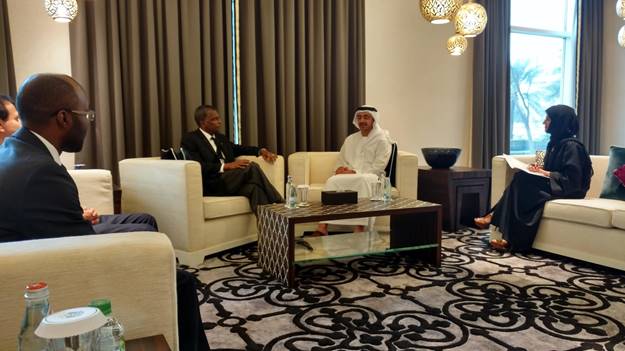 JOINT STATEMENT BY UAE AND THE BAHAMAS

ABU DHABI — The Minister Foreign Affairs of the Commonwealth of The Bahamas and the Minister of Foreign Affairs and International Cooperation the United Arab Emirates (UAE) met in Abu Dhabi on 8 March 2016 and after a round of fruitful discussions they:

Agreed to deepen the bonds and ties of friendship and understanding between their peoples and to build significant cultural, economic, educational and social opportunities and exchanges between the Parties,

Recognised the necessity of further developing friendly relations and agreements between the two countries, to realize the joint desire for cooperative economic, cultural and social exchanges and appreciation for the unique heritage of the peoples of the Commonwealth of The Bahamas and the United Arab Emirates,

Agreed that the two countries would in the near future undertake a number of agreements evidencing commitment to economic cooperation and meaningful friendship,

Acknowledged that the proposed agreements will result in enhanced opportunities between the Parties which will inure to the benefit of their peoples and will be a strong demonstration of their commitment to one another,

Reaffirmed that both Governments would work towards strengthening their cooperation to include strategic objectives such as job creation, investment, social development and tourism, and would memorialize their joint commitment in the form of a Memorandum of Understanding,

Agreed to meet at a mutually convenient date to continue their dialogue.