To Tribune Comic: Ya Ma Is An Idiot 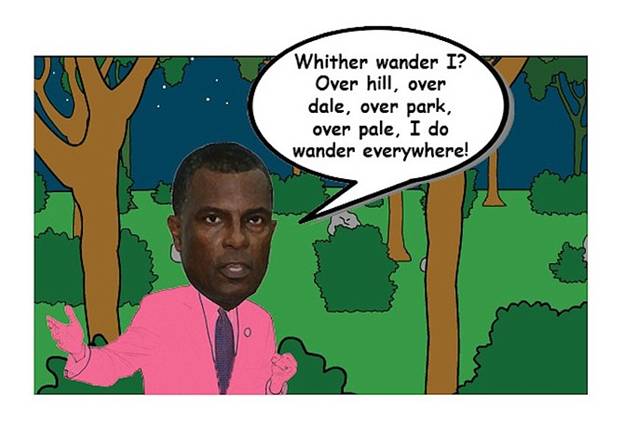 The following piece appeared in The Tribune on 24 July purporting to be a funny commentary on the weekly news.   One of his targets, the Minister of Foreign Affairs who he called an idiot by resorting to Shakespeare.  We reply: “ ya ma is an idiot”.  The problem with the piece is that it wasn’t even funny and says more about the ignorance of the comic and his lack of talent.  God help him if he has to make a living off that as humour.  The piece also contained a lie.  The Minister of Foreign Affairs has no tailor made suits and has no 50,000 dollar budget for clothing. Where do these idiots make this stuff up?  In fact, it is grounds for a libel action against The Tribune and Mr. Mitchell would be well advised to pursue that remedy.   The name of the comic is Inigo ‘Naughty’ Zenicazelaya.    His photo appears below and we show you the piece he wrote.   Poor fellow.

What was Mr. Mitchell thinking when he reinforced the “crazy” talk, those no-doubt regrettable words of Mr. Christie’s?

When Mr. Mitchell eventually was called out by his predecessor in the Ministry of Foreign Affairs, the former Deputy Prime Minister, Brent Symonette, who said that his comments about Mr. Izmirlian were inappropriate and sent the wrong message to foreign investors, our (Harvard educated) Foreign Minister (dressed in his tailor-made suit, no doubt bought with his alleged gargantuan $50k a year “wardrobe” budget which is only dwarfed by his travel budget, both paid for by the Bahamian people) had the gumption to say that Mr. Symonette was “in no position to tell (him) about appropriateness”. He further advised Mr. Symonette to “keep his advice to himself”.

Then Mr. Mitchell got all Shakespearean and said that the former Foreign Affairs minister should “go hide under the rock from whence he came”.

Really? From ‘whence’ he came?

Oh, how thou doth soundeth like a bitter Puck (aka Robin Goodfellow), Mr. Mitchell! Dost thou looketh around, Frederick? Hast thou noticeth how Baha Mar and thy Camelot hath crumbleth?

Alas, my fellow countrymen (and countrywomen), we can only hope that our politicians will “catch sense” when speaking to national issues and exude even fleeting statesmanship.

As for me, I will leave you with one of my favourite Shakespeare quotes from Macbeth (in honour of Mr. Mitchell):

“Out, out, brief candle! Life’s but a walking shadow, a poor player that struts and frets his hour upon the stage and then is heard no more: it is a tale told by an idiot, full of sound and fury, signifying nothing.” – Macbeth, Act V, Scene V.