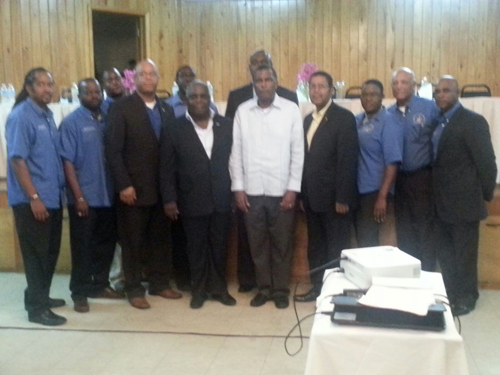 Flanked by members of the Exuma and Exuma Cays Local Government Council are area Member of Parliament and Parliamentary Secretary in the Ministry of Agriculture, Marine Resources and Local Government the Hon. Anthony Moss (3rd from left); Deputy Prime Minister and Minister of Works and Urban Development, the Hon. Philip Brave Davis; Foreign Affairs and Immigration Minister, Hon. Fred Mitchell; and Health Minister, Hon. Perry Gomez. They were in Exuma on the 10th September to update residents on government initiatives during the Local Government sponsored Annual Town Hall Meeting

Exuma, Bahamas – More than 300 residents of Exuma and the Cays attended the Exuma District Council’s Annual Town Meeting on the evening of September 10, 2015. Representatives for local government districts, Cabinet Ministers of the Government of the Bahamas, and the Member of Parliament for Exuma, had the opportunity to speak to residents in Georgetown.

Exuma’s Chief Councilor and others went over community announcements, accomplishments and budget allocations for the current fiscal period.

The floor was then given to national Government leaders to update residents on issues of concern on the island, including infrastructure, healthcare, and immigration. The opportunity to participate in this forum reiterates the Government’s commitment to communication with residents. This commitment is aligned with the Government initiative to build a Stronger Bahamas, for a safe, prosperous and modern future.

Deputy Prime Minister and Minister of Works and Urban Development the Honourable Phillip Brave Davis highlighted numerous infrastructure projects that are ongoing in Exuma and the Cays as well as informing residents of the state-of-the-art mini-hospital that is soon to open on the island. He also noted that Urban Renewal will begin to coordinate programs for residents in Exuma, which was received with great applause by the crowd. The Deputy Prime Minister stated that modernizing and upgrading the Moss Town airport was also a key priority for the Government. He concluded by stating that Exuma continues to show enormous growth potential, and the Government must serve as a facilitator of that growth and not a barrier.

Minister of Foreign Affairs and Immigration, Fred Mitchell clarified immigration policies. He also charged members of the Junior Council to be diligent in their pursuit of Local Government office in the future.

In response to concerns regarding foreign skilled workers in Exuma, he outlined the process by which employers can have permission to hire foreign workers. Employers must first advertise the position for a period of time in the press or other public arena, and then they must clearly demonstrate that there are no Bahamian workers with the required skills to fill the position. If and only if those two requirements are met, is an employer permitted by Government to hire non-Bahamian workers. He stressed the enforcement of this policy and encouraged Bahamians to register with the Department of Labour in Exuma to ensure employers and the Government are made aware of these skills so more Bahamians can become employed.

Minister Mitchell indicated that consideration is being given to allowing the mobile division of the passport office to come to Exuma with more frequency, so residents do not have to incur the cost of traveling to Nassau for this service.

Dr. Perry Gomez, Minister of Health spoke about a modern healthcare facility on the island of Exuma that would service this region of The Bahamas. It was stated by Government at this meeting that the mini-hospital in Exuma is expected to be completed by the end of the year, which will have a significant impact on the delivery of healthcare on the island. Dr. Gomez also spoke about increased medical personnel on the island, including plans for three full-time physicians, a resident dentist, and a senior pharmacist. Dr. Gomez indicated the Ministry of Health also expects to introduce emergency medical technicians in Exuma.

The local Member of Parliament and Parliamentary Secretary in the Ministry of Agriculture, Marine Resources and Local Government, Anthony Moss was also in attendance. Mr. Moss reiterated his commitment to his constituents and working with the Government to do what is best for the residents of Exuma.

To conclude the meeting, residents had the opportunity to ask questions, make comments, and highlight their concerns to Government officials at the local and national levels.

Local government leaders were praised for coordinating gatherings like this one, as it strengthens the community. They hope to hold more frequent meetings in the future.