TRAVIS ROBINSON GETS A LESSON IN CIVICS 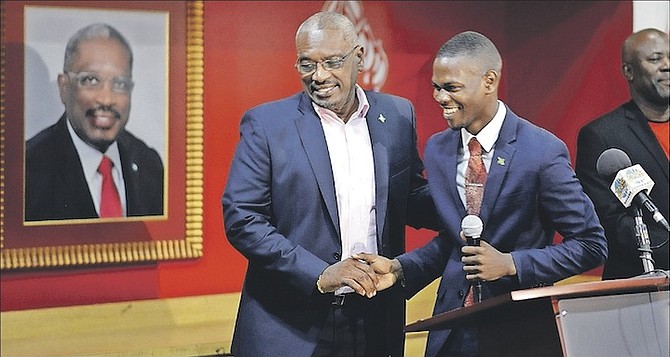 Hubert Minnis, the Prime Minister, fired his poster boy for youth Travis Robinson. One year after putting Mr. Robinson forward as the future of the FNM and as an example of how unlike the PLP the FNM listened to young people, Mr. Minnis dumped mud all over the poster boy.  Mr. Robinson put a brave face on it and headed into his constituency where he was given a hero’s welcome.

That’s all well and good but it is very much  like when you cut a  chicken’s head off, it still runs around until the energy left in the body dissipates.

When Mr. Robinson woke up the next morning, there were some real practical issues to deal with. One is that he had no car, no phone and no 45,000 dollar salary to depend on.  From unemployed to employed at a fabulous salary for a young man, to unemployed again all in a year.  He has a seat in a party that has a large majority and does not need his vote to continue.  He got no sympathy from the fellow FNMs who all said Mr. Minnis was justified in what he did.

Senator Carl Bethel speaking in the Senate on 20 June led the way in the technical justification.  He said that the rules of the Westminster System which he told all FNM MPs when he met with them in caucus just before the convening of the first House that if the whip was on and they refused to be governed by it, then all Ministers and Parliamentary Sectaries would go.

Mr. Robinson could not plead ignorance on another level because the Prime Minister had made it clear when he wrapped up the debate on Monday 18 June that those who voted against the budget or those who were absent without his permission would be at peril.  Mr. Robinson who had staked out his position the week earlier really had no choice.  The Prime Minister said he had none either.

The Prime Minister and Senator Bethel are not being entirely truthful. The fact is if they wanted to save Mr. Robinson, they could have dispatched him on some false mission to nowhere. They did that for Adrian Gibson, for James Sweeting, for Pakeisha Parker and for Donald Saunders.  But they didn’t see fit to do so Mr. Robinson.

Mr. Robinson for some reason thought that his new found friend Minister of Tourism Dionysio D’Aguilar would speak up for him and protect him. Not so.  Mr. D’Aguilar looks after only himself. The first law of nature is self preservation.  He now has a new Parliamentary Secretary in James Mackey, the North Eleuthera MP.  Life goes on.  Mr. Minnis says that he hopes there can be a reconciliation.

Meanwhile, Mr. Robinson is pondering what to do.  The last time something like this happened, Franklyn Wilson who was then the poster boy for youth under Sir Lynden Pindling lost his nomination in 1977 because he refused to follow a request of the Prime Minister to withdraw a Select Committee Report from the House.

Well Mr. Robinson can see what happened to Sir Franklyn Wilson.  There was some temporary pain but today he is one of the most powerful, influential and richest Bahamians. So worry not brother.  All will be well. In the meanwhile, if you need a home the PLP is available and open to it.

Give them a call.