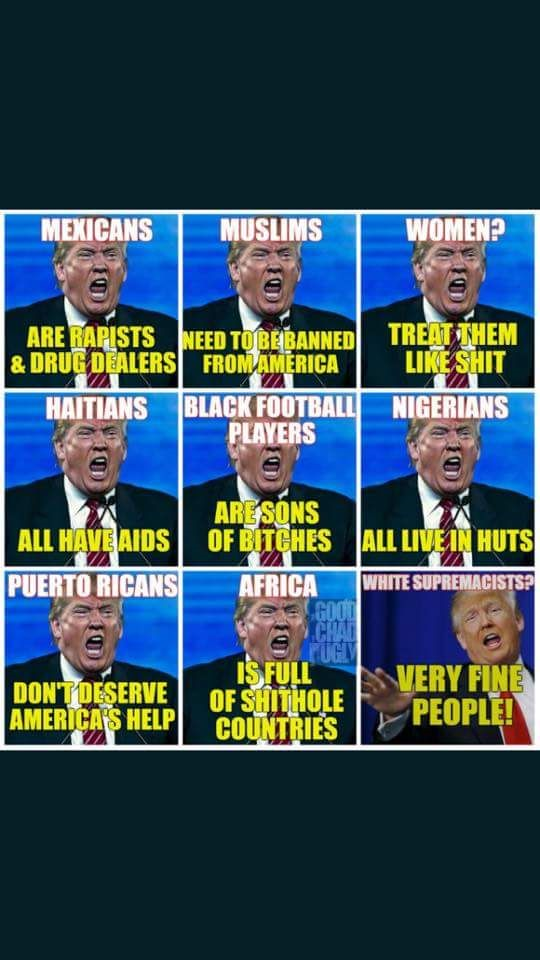 When the news broke on Thursday 11 January that the President of the United Statas Donald Trump had described African countries and our sister country Haiti as a shithole, there was the usual outrage with which we have now become familiar with Mr. Trump as head of the United States Government. His response to our outrage was also similar. He lied. He said that he did not say it. We know from Senator Dick Durban of Illinois that he did say it. No doubt. This adds to what the Washington Post has said is some 2000 lies that Donald Trump has told since he became President of the United States.

We all have known that Donald Trump is a racist. We have said in this space before that he is an idiot, a jackass, and a danger to the wellbeing of the world and that the United States ought to be ashamed that he is their leader. This is reprehensible in this most enlightened of ages or so we say that we tolerate this. The question is what do you do about it? We believe that when your voice is all you have, then you have to use your voice.

The Caricom Heads of Government meeting takes place in February in Port au Prince, the Haitian capital. Haiti’s President is now the Chairman of Caricom. Caricom needs to make a forceful statement denouncing the comments of the United States president for what they are. Caricom ought to indicate its continued support for Haiti.

There are some too smart people in The Bahamas who have sought to equate the frustrations which Bahamians have with irregular Haitian migration, with the racist sentiments of Donald Trump. They are being too clever by half. There is no moral or other equivalence between Bahamians calling the slums in which Haitian migrants tend to live in The Bahamas “shanty towns” and Donald Trump calling Haiti a “shithole”. A shanty town is just that a shanty town, an area with irregular settlement, buildings and lack of basic infrastructure to live. A shithole is a description beyond a state of being but it casts an aspersion on an entire people, condemning them in the context in which it was spoken as less than human, less than white people and therefore unacceptable ab initio.

We do not believe that any sensible Bahamian thinks that.

The Bahamas government has a task to protect our borders. We cannot support irregular migration. However, we do not in official policy or otherwise think that Haitians are less than human. There is therefore a big difference. Please let us not get confused on the two points.

The Bahamas Government has an obligation on behalf of us all to lead the call from Caricom to make a strong statement on this matter of the U S President’s statement. If Caricom does not act then we ought to act unilaterally to do so. It is the right thing to do.

We believe that if we do not do it, then The Bahamas and Bahamians will fall into that disgraceful group of people in the United States who find excuses for this vulgar, crude and unacceptable behaviour.