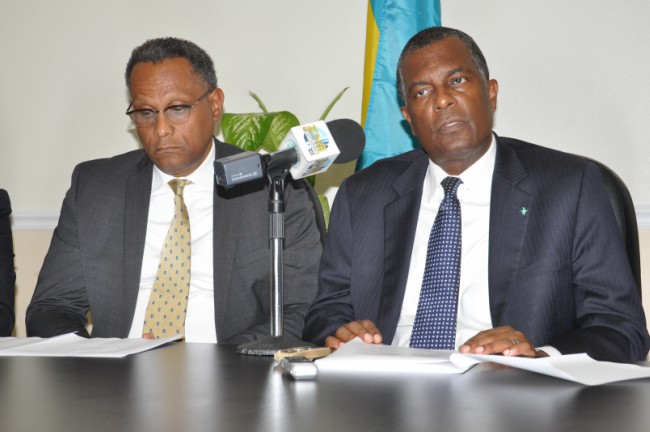 Freeport, Bahamas – Prime Minister Perry Christie is expected to officially open the 9th United Kingdom-Caribbean Forum in Grand Bahama tonight signaling what is expected to be two days of exhaustive talks on hot topics such as education, migration, energy, security and foreign policies.

In addition to the aforementioned issues, Minister of Foreign Affairs and Immigration Fred Mitchell said at a press briefing Wednesday he expects that there are two central issues the 150 delegates will discuss.

“One is the fact that Financial Services is front and centre now for our concerns, given the Panama Papers and what is happening in the United Kingdom; and the second being the issue of de-risking which has become an important issue for Caribbean countries where local banks throughout the region are now having difficulties having corresponding banking relationships in developed country markets,” Minister Mitchell said.

“This is imperiling the ability of these banks to be able to survive and trade overseas in foreign currency.”

The forum, which is staged bi-annually, is being held under the theme: “Building A Strong Partnership for Sustainable Growth and Development.”

The first UK-Caribbean forum was held in Nassau in 1998. The last one was held two years ago in London.

Minister for Grand Bahama Dr. Michael Darville is honoured to host the delegates over the next two days and stressed the importance of the forum.

“I’m excited of the economic impact that this conference will have on our local economy and I’m thanking to the organizers of this event for choosing Grand Bahama again,” Minister Darville said.

“Finally, I would like the Honourable minister and the entire team from the Ministry of Foreign Affairs for giving us in Grand Bahama another opportunity to demonstrate what Grand Bahama has to offer. To all of the delegates who are arriving, welcome, and for all the residents in Grand Bahama this is a very important forum that will definitely put Grand Bahama once again on international display.”

A number of the delegates began arriving on Wednesday and internal meetings are set to take place this morning.

The opening ceremony is slated for 6:00 pm and will include remarks from Ambassador Irwin LaRocque, CARICOM Secretary General; Sir Louis Straker, Deputy Prime Minister and Minister of Foreign Affairs, Trade, Commerce and Regional Integration of Saint Vincent and the Grenadines; the Rt. Honourable Philip Hammond, Secretary of State for Foreign and Commonwealth Affairs of the United Kingdom; and Minister Mitchell.

The all-day meetings Saturday are expected to conclude with a joint communicate that will outline all of the areas of collaboration and cooperation which the Caribbean and United Kingdom have agreed to over the next two years, to include the Agenda 2030 which was adopted by the United Nations General Assembly in 2015.