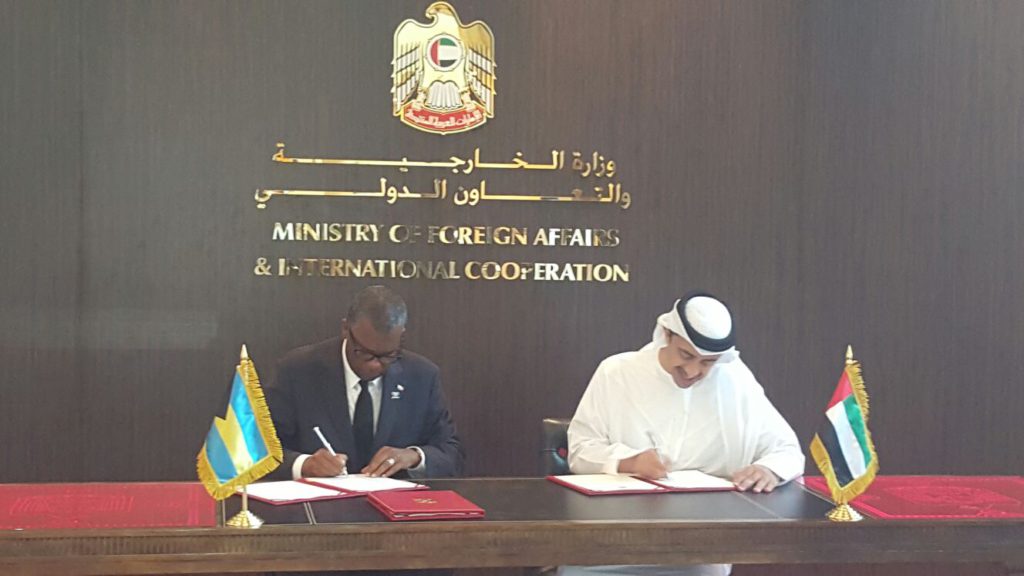 Abu Dhabi, United Arab Emirates — The Foreign Ministers of the United Arab Emirates, His Highness Sheikh Abdullah Bin Zayed, and the Commonwealth of The Bahamas, the Honourable Frederick A. Mitchell, today signed agreements, marking a deepening of relations between the two countries.

The Memorandum of Understanding On the Mutual Exemption of Entry Visa Requirements for Holders of Diplomatic, Special, Official/ Service and Ordinary Passports, which will come into effect within 30 days, will permit nationals of the two countries to be exempt from visa requirements to enter each other’s territory.

The Memorandum of Understanding on Political Consultations makes provisions for the two countries to consult and meet regularly to discuss bilateral issues of interest, as well as matters in the regional and international relations.

The Ministers noted that in a few days time, during the upcoming ICAN 2016 meeting in The Bahamas, both countries will achieve another milestone in their diplomatic relations when their respective Transport Ministers will sign an Air Services Agreement.

Prior to the signing of the agreements, The Bahamas and the UAE already enjoyed excellent relations, where for the first time ever in their diplomatic relations an Ambassador of the Bahamas to the UAE was named, H.E. Tony Joudi. Amb. Joudi presented his credentials to the His Highness Sheikh Mohammed Bin Rashid Al Maktoum, Vice President, Prime Minister and Ruler of Dubai on the 23rd November, 2016 at the Al Mushrif Palace.