THE POLITICAL FAKES ON THE BLACK FRIDAY MARCH 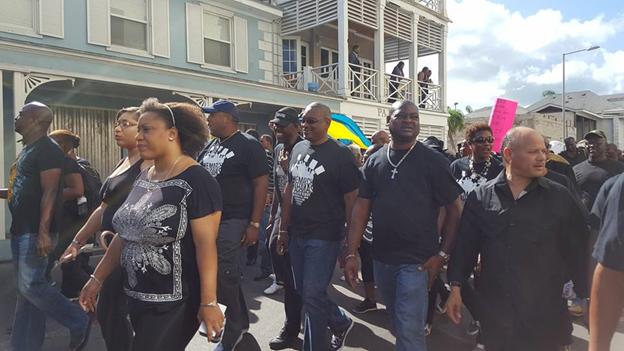 The FNM planned and executed the Black Friday March. Their leaders were all there to be seen. Shameless.

So everyone is vex “to ratid “as the satirist on Facebook C A Newry would say. Vex because the PM wouldn’t agree to meet with them.  Then vex because he did agree to meet with them.  Vex because Fred Mitchell sent a voice note telling his Branch members to stay away.  Then vex because the PLP Ministers showed up at the march.  They even booed poor Leslie Miller who should have been accepted as an agent in their discontented cause.  Vex! Vex! Vex!  They are good at being vex but that’s about all.

We hope that being vex gets them somewhere.

For Mr. Henfield of course, it is a fillip for his political career.  He apparently wants to run for Parliament in Carmichael.  No doubt former Senator John Bostwick wants people to know that he is still relevant after his criminal conviction. Then there were others like Bishop Walter Hanchell who has given up on the church’s mission to save souls to be an outright optical agitator. He and the President of the Christian Council Ranford Patterson are on a roll for discontent. They are all vex and angry and spewing out venom.

The protestors threw everything and the kitchen sink as the government.  The government did not do this, didn’t do that.  It was a laundry list of complaints.  There are no doubt some real issues that need to be addressed and this is political advocacy at work.  An election is coming and they think the PLP is on the ropes so they want an election called now so that they can win and be done with Mr. Christie.

Let us tell them this though.  The PLP is going nowhere.  If you think that little horse and pony show you pulled off in Bay Street was something, wait until the PLP strikes back.  Hope you’re ready for it.