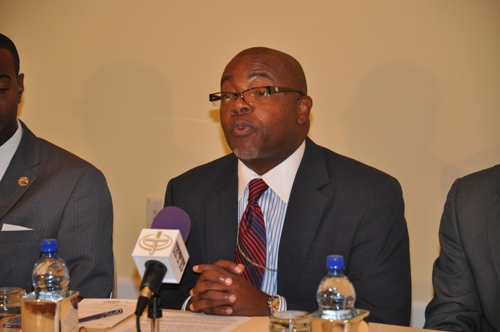 As you’d be aware, I am presently out of the country. Of course, you all remain in my thoughts and prayers.

A few days ago, a faithful member of our congregation, The Hon. Shane Gibson was arraigned before the magistrate’s court and certain charges were made against him. As you also are aware, Mr. Gibson’s wife, Pastor Jackie serves with distinction as a member of the Ministerial Alliance and their children serve actively in our ministry and fellowship.

While I’ve done so privately, I wish to publicly affirm my prayerful support for the well-being of the entire Gibson family. I affirm my deep conviction that the awesome God that stirred in Mr. Gibson the desire to serve our nation for decades in the trade union and at the highest level of national service as a Member of the Cabinet of the Bahamas, remains with him. It is so comforting to observe that he has the love and support of his wife of over thirty years and that of his immediate family. May God’s Grace continue with all of them as they provide the support to our brother that is so critical in these times.

I turn to the congregation at large. You would know that our deep faith in the message of our Savior, Jesus Christ, obligates us to the concept of being our brother’s keeper. It also admonishes us to be slow to judge. Even the law of man is rooted in the notion of innocence until proven guilty. The true strength of the church is not found in the cradle of comfort, but rather manifested in times of testing. Our motives must always be pure and our language, as the Apostle Paul admonished, be seasoned with grace.

I turn my attention now to the authorities and confirm our commitment to Paul’s admonition to Timothy, which instructs us to support and pray for kings, and for all that are in authority; so that we may lead a quiet and peaceable life in all godliness and honesty.

At the same time, to the authorities I say that the laws of man can only be just when they conform with the laws of God and are enforced with basic respect for human dignity. l call upon all relevant authorities to question whether the manner in which Mr. Gibson was handled was consistent with this principle.

I have watched several videos of Mr. Gibson being escorted to the Court. It was painful. I have spoken with several individuals who personally observed what happened. My pain deepened. Not just for the well-being of Mr. Gibson but for the common good.

I am aware that Mr. Gibson was called in for questioning by the police. I am advised that just prior to this he suffered an injury which required the aid of crutches for support. The videos I saw show that while being escorted by several officers to his arraignment, Mr. Gibson was made to abandon his crutches in order to be hand cuffed behind his back. Observers report and video affirms that he limped along the street and literally hopped up the steps to the level of the court.

Based on the totality of the circumstances, including the nature of the charges, the presumption of innocence and Mr. Gibson’s long-standing service to multiple sectors of our community and the nation itself, I have struggled mightily to understand what risk was being protected against that required the measure of inhumanity shown to Mr. Gibson.

We are well served to be guided always by the simple admonition of St. Paul to the Galatians that we are to ‘do unto others as we would have them do unto us’. This simple concept is so powerful that it is central to our shared values of civility. Any breach of this basic Christian principle, especially in the exercise of public duty, can result in serious and long lasting negative consequences for our nation.

Let us remain steadfast in prayer for our Church and our Country.