Marvin Dames Will Know What Tit For Tat Means 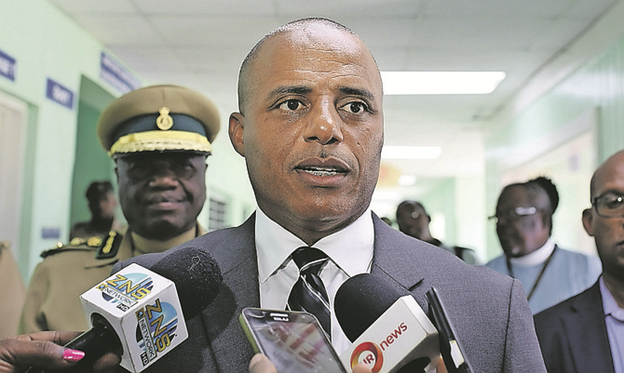 The following report appeared in The Tribune on Friday 4 August by Krishna Virgil about a speech made by Senator Fred Mitchell in Bimini on 2 August at PLP Branch meeting:

Mr Mitchell insisted the FNM is “setting a dangerous precedent” in how it is now handling the political affairs of the country.

He suggested the governing party has “turned on” its opponents and is attempting to use the state to imprison, bad mouth and create a bad image of them across the country.

While the former Fox Hill MP encouraged supporters to move forward despite the government allegedly creating “political prisoners,” Mr Mitchell said the party will hold a national convention in October.

However, PLP Chairman Bradley Roberts would not confirm whether the party plans to have its convention in two months. He said when this is set in stone, the organisation would make a formal announcement.

“Poor Marvin Dames who is the minister of national security and appears to be conducting this witch hunt against the PLP from his office in Nassau went to the newspaper a couple of days ago last week and said he didn’t understand the notion of tit-for-tat,” Mr Mitchell said to the small group of supporters gathered Wednesday night in Bailey Town, Bimini during a PLP branch meeting. “He says because this isn’t tit-for-tat. The police are actually doing their investigations and he doesn’t understand it.

“Because it means now that every little faux pas and every exercise of judgment and every little management issue you’re involved in suddenly becomes criminal and you then turn on your political opponents and use the state to imprison them and to bad mouth them and to create a bad image of these people across the country.

“So that’s the precedent. So you can’t be surprised if PLP supporters, upon winning again, say that’s the road that we are going to go down. So if . . . whoever survives the FNM government is seen in handcuffs being paraded before the court because of some decision that he made while he is in government, nobody can feel sorry for them in five years. We have to be very careful.

“What is happening here is they are slave shaming us. Emancipation Day is coming up on the 6th of August.”

“I told him what I’m trying to do, I actually want him to succeed as leader of this party.

“I am actually concretising where we are in building on a solid base and putting together an organisation that is like the one I remember during the glory days of the PLP where branches met on a regular basis and existed, where being a branch chairman was an important thing to be in a community, where people knew who the leaders of the PLP are and where younger people were engaged in the dialogue of the forward progress of the party.

“So I am trying to search myself for some kind of formal role to be able to do that. So I’d like to work and talk to him about what that role could be. I think it is important not to abandon ship.

“I know the current fashion is that everybody who is in quotes ‘old’ must go because everybody is held responsible for the loss.”

He continued: “Let me put it this way, the last leader of the PLP was Perry Christie. He gave a speech (and) he indicated that he accepted fully the responsibility for the loss.

“That puts a red line under this matter, there needs to be no discussion or debate about it. It’s done. Stop wringing your hands. Let us move forward. The FNM has a mandate for five years. That’s 60 months. Three have gone. That’s 57 to go, next month four will be gone and 56 to go.

“Now that’s the same time period that we have to get a victory wagon going and the more we sit around ringing our hands and saying ‘oh dear God we lost and they are locking up this one and the next one’ get up on your hind quarters and let’s go and move. Let’s move forward. The party has a great legacy (and) there is nothing to be ashamed of. The only apology that we have to give is for allowing this country to be turned over to these people,” Mr Mitchell said.