A SLAVE HOB NOBS WITH THE QUEEN 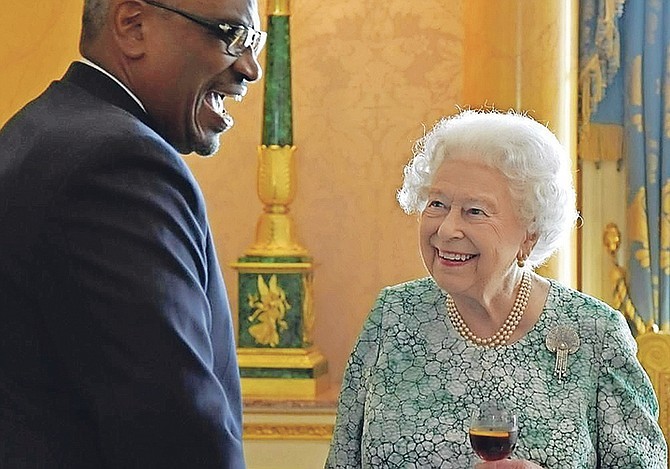 The trip to London to see the Queen was just the best example of what big friggin phonies that the Prime Minster Hubert Minnis and his colleagues are.  They campaigned on not travelling saying that the PLP travelled too much.  Mr. Minnis took 31 people with him including his wife, the wife of some of his aides.  The lists seemed endless.  The cost of hotel rooms 150,000 dollars.  They had a grand old time.

The other thing that the photo shows is that anyone can get to see the Queen. All you have to do is have some people vote for you and she will let you in the cage and smile and talk with you.  Means nothing to her.  What is interesting is how each and every one of our Prime Ministers were happy to go running to see the Queen .  So much for anti-colonialism.  All of them have accepted to be members of the Privy Council so they can be called Right Honourable.

This present Prime Minister is of course a slave.  He has joined a pact with the UBP, represented by Brent Symonette in his government, even though he pulled the race card when he was trying to become leader of the party.   He is in a position to be the first Prime Minister to receive the title Most Honourable. This is a title which is offered only on Prime Minister of The Bahamas under the National Honours Act which his Government recently brought into Force.

He of course wouldn’t have thought about that.  He was so anxious to run off to London to get the honour from the Queen but could be the first Prime Minister to receive the honourific Most Honourable.

This shows you how weak kneed we are in this dispensation.

A picture tells a thousand words.  Just shy of 200 years after slavery, and 45 years after independence, we have the Bahamian Prime Minister grinning up with the Queen in London and agreeing that Prince Charles should continue the tradition and be made head of the Commonwealth when his ma dies.  Oh well.