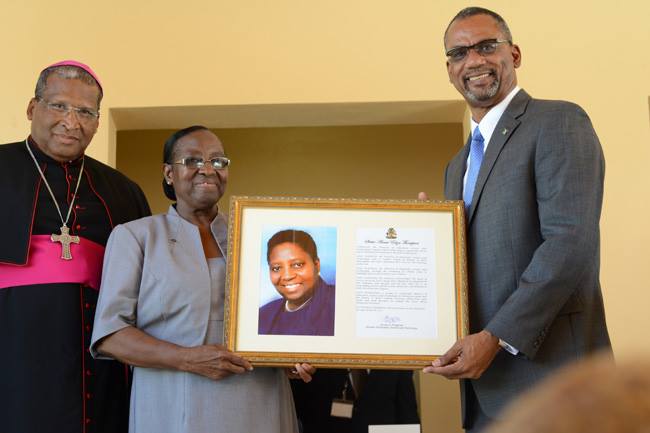 Minister of Education, Science and Technology the Hon. Jerome Fitzgerald said the new pre-school would play a major role for generations to come.

“The pre-school that is being opened on these grounds, where Sister Annie was principal, is critical to the future of our country,” said Mr. Fitzgerald. “Greater emphasis is being placed to ensure that our children receive the tools and skills necessary to provide them with the foundation needed for their future educational success.”

Annie Eliza Thompson was born in 1933 in Gregory Town, Eleuthera, to parents John Alexander and Muriel Joyce (Johnson) Thompson. She attended university in Albany, New York and became a nun during the l960’s. In l970, she became the Principal of St. Bede’s Roman Catholic School. Sister is an avid sportsman, especially in the game of basketball.

The new government pre-school is located on the compound of the former St. Bede’s Roman Catholic Primary school on Sutton Street off Kemp Road. The state-of-the-art school was established in 2013 after the government purchased the property from the Catholic Board.