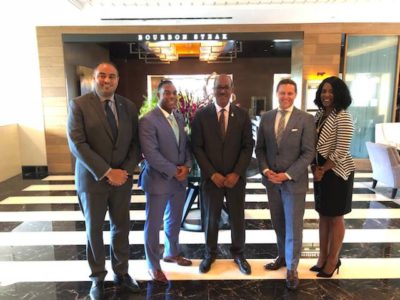 The Ambassador and Consul General were accompanied by Ms. Ieshia Deveaux, Second Secretary at the Embassy.

Mr. Whyly, a native of The Bahamas, attended Bahamas Academy then continued his education at Northern Caribbean University in Jamaica, The University of Surrey, London, and Tennessee State University. He earned degrees in International Business and Management and also studied Engineering.

Mr. Whyly’s hospitality experience began at an early age, working as a front office and housekeeping clerk at The Kelton Lodge, owned by his father, located in Fourth Terrace, Centerville, Nassau, Bahamas. He admits that hospitality was not his career choice; however, once the opportunities to work in the hotel industry became available, he gladly pursued them.

Mr. Whyly became Hotel Manager at The Four Season Hotel in downtown D.C, on July 10, 2018, after excelling in his roles as Residence Manager, Front Office Manager, Assistant Director and Director of Rooms over the past 10 years at Four Seasons properties in Exuma, Bangkok, Thailand, Maui and Ko Olina, Hawaii.

His accomplishments as a Bahamian in the Diaspora and appointment as Hotel Manager at The Four Seasons were featured in the online news publication BAHAMAS CHRONICLE three weeks ago.