Darron Cash Delivers A Cut Ass To The FNM 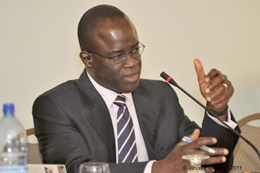 This note was posted on the Facebook page of the former Chairman of the FNM and former Senator Darron B Cash on 29th September.  It was an even bigger scorcher  than the one the day before about the FNM needing a “ come to Jesus moment”.

Being chairman of a political party is a difficult job. If you do your job right you are the messenger who shares public sentiment with party leaders. All of them. The Chairman speaks for people who want to remain anonymous. That is a good thing for the party members but the messenger-chairman still gets shot. Such is the Chairman’s lot in life. For the moment I’ll take on that role as a former chairman. So go ahead. Aim…

From the outside looking in all does not appear to be well in the FNM. I wasn’t in any meeting referred to in National Review and have not been briefed. I am informed by what I read in the Paper. And that is the point of this post.

Our supporters are pulling their hair out. It is time to call a spade a spade. Two issues frustrate the hell out of FNM Supporters: One: The Leader, buy viagra treat despite his considerable talents, cialis canada is not winning hearts and minds and inspiring confidence to the extent needed. Two: the Party does not appear to be united—firstly around the leader and secondly around the mission of winning a general election. The latter problem is exacerbated by the former.
The fact of the matter is that the leader of my party is not moving the party closer to a decisive general election victory and those closest to him seem to know it…i.e. Some members of parliament…and something needs to be done. This I submit is the implication of the national review article and why it begged for a considered response. Something must be done.

Firstly. I submit that the FNM…my Party…has to have a come to Jesus moment when we confess our sins one to another, forgive each other, forget the past, and return our full attention to preparing a winning agenda focused on the needs, dreams and aspirations of the Bahamian people.
The attempted fix of a one day leadership election/convention last November did not work. The fix applied was either the wrong medicine or the wrong dosage. Whatever your perspective, the FNM mind and body are not one and they must be made whole. That is a function of leadership. It is a function of The Leader.

The wounds of dis unity are deep but they are self-inflicted. The Leader is the one who must solve the problem. I’ll illustrate.

I was distressed to read the National Review story about the FNM Cabinet in Waiting”. No one was “on the record” but the story still seemed true. I thought I would wait to see what the official party response would be. Today the response is “No comment.”

With my “Chairman’s” hat on, I say that “no comment” is not good enough as an official response. The public….and more importantly our supporters are wondering what in the He’ll is going on. Why can’t the FNM. get its act together? The burden to get it together and bring the team together is the Leader’s job.

There is a fundamental problem if the evidence of a party Leader who lack of support starts with the elected persons in his shadow cabinet. Today only the Deputy FNM leader pledged allegiance to the Leader. And once again the FNM MP from South Abaco acknowledged that he was out of the loop.

These two persons’ pledges of allegiance seem very Christie-esque. Only two of Christie’s Cabinet Ministers answered the PM’s public and humiliating plea for support. I took it for granted that all the other Ministers were praying for Brave to end Christie’s reign of incompetence. “No Comment” was the collective cabinet response. LOL.

“No comment” from Chipman and Butler Turner, I smiled. Months ago when The Tribune reported on an effort by the FNM Leader to deny an FNM nomination to me and Loretta Butler Turner the response from the Party leadership was “no comment”. No comment. Why? Because it’s true? Couple weeks ago when Punch reported that Hubert Chipman and Richard Lightbourn would be denied nominations the official response was also “No Comment.” why? Because it was true?

It is hard for the leader to build a strong protective team that will spring to his defense when the clear impression given is that of a complete intolerance for independent, outspoken and divergent voices.

Only outstanding leadership that unifies and inspires confidence will bring our party out of this current morass. This is testing time for Dr. Minnis and everyone who would be leader. Who will measure up?

I conclude with this. The “C” word. Unless the Leader of the FNM gets every elected member of parliament to publicly stand with him and pledge their support to him, there should be no alternative but for the Party to go into a FULL convention with elections and put this matter behind us once and for all.