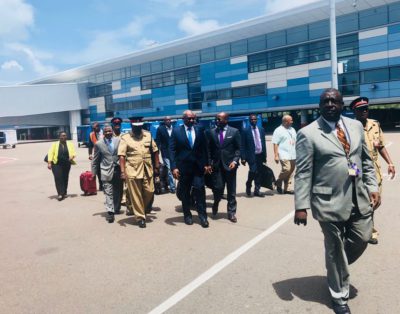 With just about 15 months in office and with some 45 months left for them to do something, the Free National Movement and their leader and leaders just seem lost in space.  They make one blunder after the next.  They seem so insensitive to public opinion. It is hard to believe that these are the same people who 15 months ago said in opposition that they would listen to the people. They promised to do better than they and their adoring media friends had portrayed the PLP as: feckless, insensitive and lacking in transparency.

Fifteen months on, we know that Peter is no better than Paul.  We suspect that when the country looks back on the unvarnished record of both periods in office and compare and contrast them, they will find that Hubert Minnis has been a disaster and a disappointment to The Bahamas and that Perry Christie did much, much better.  We are not there yet because people are still angry with Mr. Christie because he simply stayed on too long, but history will largely absolve that mistake, when compared to this crew that now governs. They are a wrecking crew; a disaster.

The one we start with this time is Dionysio D’Aguilar, the Minister of Tourism and in this context, the Minister responsible for gaming. For some reason, and we suspect it’s because they did not get the donations that they wanted from the numbers crowd, the FNM has targeted the web shop boys: Sebass Bastian, Craig Flowers et al.  This is no surprise since we reported in this column that the Prime Minister told them three regattas ago in Long Island that they should enjoy their time because the FNM when they came to office would shut them down. Looks like that is exactly where it’s headed.

So Sebass Bastian in a gesture of goodwill announced that he would hold off until the Government had time to study the report on taxation of the sector which the sector had provided to the Government.  So much for that.  Mr. D’Aguilar went to the press almost the next day and effectively said that he had no idea what Mr. Bastian was talking about.  He said no one asked them to hold off on layoffs; that the sector must do it had to do to keep their business going; and the Government was staying on its course on the taxation.  This will see a tax of 50 per cent on the profits of the web shop owners.  That was that. They delivered the answer in public and without fanfare. What then is Mr. Bastian to do?

Craig Flowers has already said that he must consider layoffs as well, even though he had been the first to announce that he would wait and see.

So that’s the Minister of Tourism.

The next one we deal with is this man Carl Culmer Jr., who is the FNM’s Chairman. You can only say with him: “Lord help us?  Where did you get this man from?”  You have never met such dim witted logic, plain old lies and revisionism than in the words that utter forth from his mouth and pen. Plain, bold faced untruths. He is a disgrace to Black people.

The PLP’s response to his latest lie and that of Glenys Hanna Martin are published below.

The Captain of this inept, lying crew is Hubert Minnis.  He moved his Empowerment Zone Bill through the Parliament last week.  But instead of trying to promote its provisions, he spent all his time talking about what the PLP failed to do over the hill. Nonsense. The people who run this country came from Over The Hill.  They are the direct beneficiaries of the better health care, better education., better roads, better water supplies, better roads, better telephones, better housing stock that the PLP helped to foster in this country.  That is what the PLP did for Over The Hill.

Mr. Minnis tries to deceive the poor by suggesting that he is one of them but if he thought that this Bill they just passed is an example of how he is a friend of the poor after increasing taxes by 60 per cent on the poor, he should not that we are unimpressed an not fooled by him for one minute.

These folks have got to go.