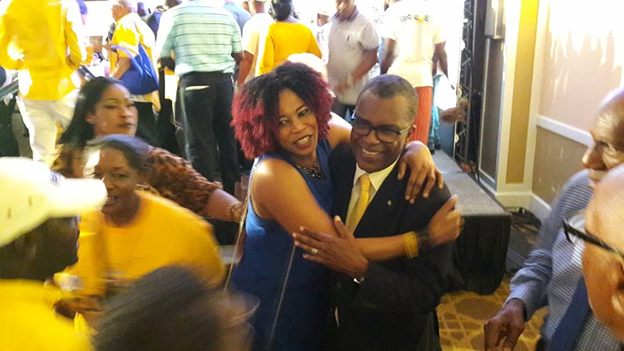 It was not until Friday 20 October, two days before the start of the convention that Fred Mitchell became a candidate for office in the PLP as Chairman. There had been speculation for days and people connected with the camp of former Tourism Minister Obie Wilchcombe had been running a salacious campaign against Mr, Mitchell for weeks. They appeared to be allied with Fred Smith’s people over at Save The Bays.

Mr. Mitchell had been on the campaign trail for months since the general election an obvious candidate for some office in the PLP but undeclared.  In the end, Mr. Davis made a decision on Friday night 20 October to say that he would not object to Mr. Mitchell becoming the next chairman.  The team went to work and within two days they were able to pull off a convincing victory over candidates who had spent thousands of dollars in the field, with paraphilia and events and visitations and imploring.

Now begins the hard part of what to do.  It is clear that the first announcement must be made to fulfil the promise of constitutional reform in the PLP, to make the organisation more flexible and inclusive.  An announcement was made today and is published on this site.

Further, there must be a period of visitation which takes place across the country, sharing the ideas of the analysis that was done for the party just after its loss and incorporating the feedback to the ideas from the report into the party’s forward plans.

Then there has to be the announcement of who the second tier leaders are to be in the party, those who are the Vice Chairs and who will be responsible for selling the message of the party and making sure that party discipline is enforced and that people throughout the islands are aware of what is happening with the party.

Then there is the question of the public relations machinery and message discipline.  One has to do with answering the FNM at every turn which the Party’s new Chairman promised to do.  The other has to do with getting the former PLP MPs who have an opinion on every subject to be quiet on party business and stick to the central message.  If that can be accomplished that will be a great step in the right direction.

We think that all the former MPs ought to consider the following:

Can we agree to stop adopting the FNM’s narrative about being dumb crooked stupid and arrogant?

Can we agree on message discipline, that if we have something to say we exchange it inside and leave the outside invective for the FNM?

Can we agree that when we speak, we promote the Party’s image and a narrative that we are the nationalist party and the only hope of the Bahamian People?

Let’s agree on that.