The music icon Ronnie Butler who died in Nassau at the age of 80 was memorialized in a service at the Joe Farrington Road Auditorium of the Church of God on Wednesday 29 November.  Leader of the Opposition Philip Davis represented the PLP at the funeral.  A tribute was read by Alfred Sears Q, C.  The memorial in photos.

These photos by Peter Ramsay of the Bahamas Information Services 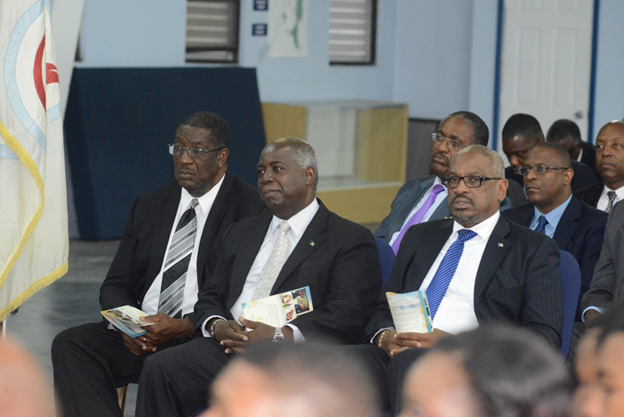 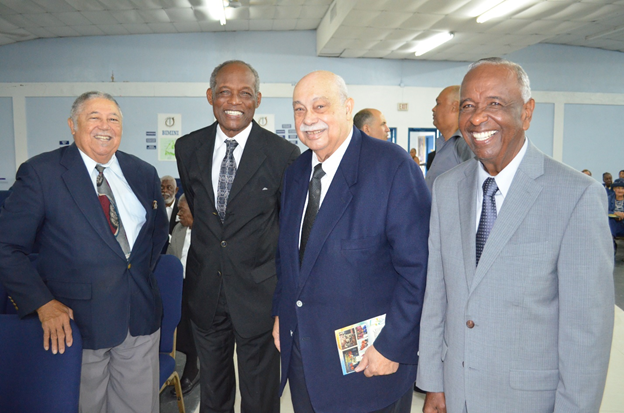 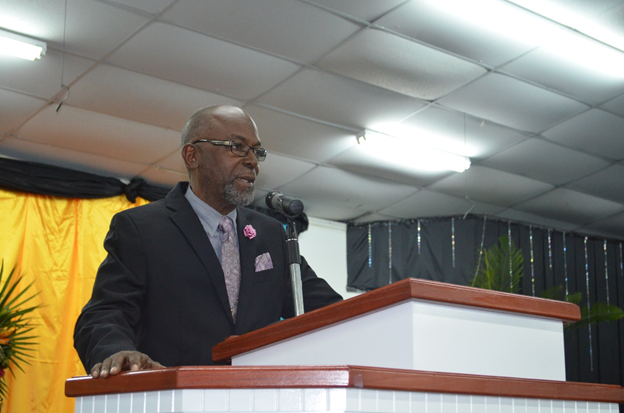 The death of Prince Ronald Butler, MBE, on November 19, 2017 marks the end of one of the most remarkable Bahamian careers, but his legend as a creative musical composer, entertainer and griot of the Bahamian people’s struggle for equality, dignity, respect, and ownership of this native land will never die.  Ronnie’s art chronicled our motion and marked our manner.  This musical legend is ours.  Ronnie Butler was as bold as our history.

On behalf of my wife, Marion, and family, I extend our love, support and thanks to his mother, Mrs. Roselyn Davis, his children Rhonda, Michelle, Ronnie, Tara, Candice and Dionne and your spouses and children and the extended family members of my friend Ronnie Butler for sharing Ronnie with us.

My cultural identity, pride in my Bahamian heritage and patriotism have been shaped and enriched by Ronnie Butler’s vision, voice and personal courage.

In 2002, after being elected as elected as the Member of Parliament for Fort Charlotte, I shared with Ronnie my plans to sponsor an annual Fort Charlotte Arts & Craft Festival along with the Fort Charlotte Branch of the PLP.  Ronnie, who was a resident of Fort Charlotte, supported the project, agreed to perform and to solicit the support his friends to perform in the festival.  For eleven years, I worked with Ronnie in organizing this Festival.  Each year, Ronnie performed and secured the participation of his friends:  Nita Ellis, Eugene”Gino D” Davis, Nita Ellis, Kirkland Bodie, David “Funky D” Ferguson, the late Terez Hepburn, Emily “Sweet Emily” Williams, Kenyon “Ancient Man” McDonald, Stevie S, Jay Mitchell, Ira Storr & Spank Band, all of whom performed, without requesting a fee. Ronnie was committed to his community of Fort Charlotte and gave generously of his talent and contacts.

Over this period, our friendship deepened.  Ronnie was disappointed that successive governments, in providing hundreds of millions of Bahamian tax dollars and Crown Land to foreign owned resorts, had failed to ensure permanent performance spaces in these resorts for Bahamian entertainers.  Around 2010, Ronnie took matters into his own hands and instructed my law firm to incorporate a non- profit company.  He invited a number his colleagues to become shareholders in the work to discover, cultivate and promote artistic talent in The Bahamas and sponsor cultural shows, young talent, special events and native Bahamian entertainment.

Ronnie had a dream of purchasing a property on Bay Street to stage live Bahamian revues, showcasing Bahamian entertainment.  He was a man of action, who invested his own resources in pursuit of his dreams.

Ronnie was a master of his craft and was the consummate professional:  always on time, meticulously dressed and demanded excellence from all of his colleagues.  A band had to be proficient and able to play in key to be worthy to accompany him, otherwise he would sing to his tracks.

In 1964 Ronnie Butler used the Burma Road Riots, which had cracked the smug confidence of the Bay Street oligarchy and laid the corner-stone for Majority Rule, as the subject matter for his song “Burma: Don’t Lick Nobody!” In this song, Ronnie incorporated an expression used during the Exuma Slave Revolt in portraying the Bahamian protesters in Burma Road Protests as the wily crow outwitting the British soldiers who are described as bullfrogs. Ronnie tells us that “bull frog dressed up in soldier’s clothes went to the river to catch some crow, but the crow smell fire and they all fly away.  Bull frog gets vex and he cry all day.”

The Burma Road Protests occurred June 1 and 2, 1942.  Bahamian workers, drawn from New Providence and the Family Islands, worked alongside American workers on the two military airport training bases in Oakes Field and out West.  Bahamian labourers were paid lower wages than their American counterparts for doing the same work.  After neither the management nor the government seemed willing to address this discrepancy, the Bahamian workers marched to Bay Street, carrying clubs and sticks, (with residents from Ova Da Hill joining in along the way) and assembled in Rawson Square to petition the House of Assembly and the Colonial Secretary.  Without a satisfactory response from either, the provocative presence of police superintendent Captain Edward Sears and the veiled threat from Attorney General Eric Hallinan, the protest exploded into two days of rioting that destroyed most the businesses on Bay Street and many businesses in Grant’s Town.  The police and the Cameron Highlanders Scottish Soldiers, stationed here at that time to protect the Governor, Edward the Duke of Windsor, fired live bullets into the crowd, killing one protester and wounding five others.  The leader of the protest, Leonard Storr Green was imprisoned.

Sir Lynden Pindling, in a lecture at the College of The Bahamas in 1998, described Burma Road as an important step in dismantling the system of racial apartheid in the following terms: “I like to think that Burma Road started the revolution which took twenty-five years to manifest itself in 1967 . . . “Burma Road cracked the wall of oppression, suppression and discrimination.  That crack was wide enough for the Citizens Committee to squeeze through into Grand Central Restaurant in 1949.”

In his song “Burma Road”, Ronnie Butler warns Bahamians against conspicuous consumption and living above our means.  He reminds us not to forget the organic food that enabled Bahamians to survive, such as peas soup and dough boy, steam conch, guinea corn hominy, crab fat and dough and the hard times when we went to church in high top tennis and getting toe-jam when it rained.  In a culture that often perceives foreign as being better, Ronnie boasts that, as a Valley Boy, he “is a native man in his native land and Junkanoo music is where it’s at!”

In his song, “Looking Pretty and Smiling,” Ronnie warns Bahamian men, who may think that their lines are beguiling, not to touch a Bahamian woman, without her permission, or “your bungie would be grass and you would end up with a shoe-heel between your eyes.”  In a culture obsessed with youthfulness, Ronnie and Count Bernadino taught us to accept the inevitability of aging, when they sang, with self- deprecating humour, to Fred Ferguson’s incomparable guitar wizardry, that “Age Ain’t Nothin But A Number” and that, like good wine, champagne, caviar, candy, brandy, mash-mellow, we should become be wiser and better with age.

Ronnie Butler brought my story from the Family of islands to the capital, all in a rhythm that sounded like home.  He made us laugh at ourselves; he told us about our past and he put a rhythm to it to make us dance and then he made us laugh and think as we danced.

From “Burma Road” to today, Ronnie’s art chronicled our collective journey as a country, while sharing his gifts and collaborating with three generations of young artists.  Ronnie’s music is the soundtrack to much of our history.  He used his musical genius as a creative weapon to empower his people.

When I decided to run for the leadership of the PLP, I spoke with Ronnie.  He gave me his support and shared his ideas about how to shift the paradigm and grow the cultural industries of The Bahamas.  My Leadership Platform contained specific recommendations from Ronnie, such as requiring display and performance spaces for Bahamian visual a performance art by all resorts enterprises receiving incentives from the Government; incentivizing Bahamian owned clubs, Junkanoo Festival, recording studios and marketing outlets to promote Bahamian cultural identity, improve cultural and heritage tourism;; the grant Crown Land to A & B Category Junkanoo Cooperatives to produce indigenous craft year-round and to establish a tertiary School of Visual, Performing and Recording Arts to provide education, training and research to grow the cultural industries in The Bahamas.

As I traveled The Bahamian archipelago canvassing Stalwart Councillors and delegates of the PLP, Ronnie traveled with me, giving his personal endorsement and sharing his talent at St. Joseph Parish Hall and at St. Gregory Parish Hall.  During our trip to Abaco, after our meeting with Stalwart Councillors at the Treasure Cay Primary School, there was an All-Abaco Sports Meet in the field of the school.  When the organizers learned that Ronnie Butler was next door, they asked Ronnie if he would sing a few songs at their event.  After giving his political endorsement on my behalf and singing a few songs for the Stalwart Councillors, Ronnie went next door to the sporting event and had the place rocking.

When we tried to make travel arrangements for Ronnie to travel with our campaign team to Exuma, one of the air charter companies refused to book a ticket for Ronnie, stating that they do not take passengers who are wheelchair bound.  When I told Ronnie about this incident, Ronnie chuckled and said “I’se A Man, not a wheel chair!”  Echoes of Burma Road!

On Sunday, November 12, 2017 Tara, Ronnie’s daughter, telephoned me and told me that Ronnie wanted to see me.  I visited Ronnie the next day, I met Julien Believe and Henreitta Cartwright with Ronnie, two young millennial Bahamian artists, who had been collaborating with Ronnie.  Leslie Miller and Sabrina Francis also visited while I was there.  I last saw Ronnie on Saturday, November 18, 2017.  He was weak, unable to speak, but conscious.  As I held his hand, he squeezed my hand.  I spoke to him and thanked him for his friendship, support and encouragement.  When I was about to leave and said good bye to him, he nodded his head quietly.  At about 7:00 a.m. the next morning, Ronnie Butler Jr. telephoned me to tell me that his father had passed at 6:00 a.m. that morning.

Ronnie’s life and work tell us that, as we welcome guests and foreign investors into our country, the Native People in this Native Land (Black and White/Female and Male/Young and Senior/Disabled and Able) should always be given priority in opportunities, incentives and facilitation to realize the full potential of the Bahamian creative imagination, intellect and ownership.

Ronnie Butler has left us, but his vision, legend and rebel spirit will never die!