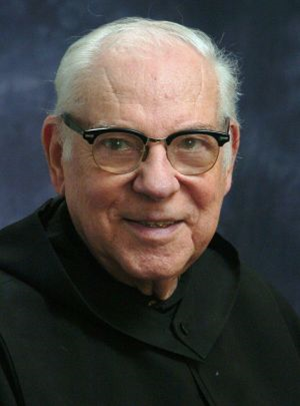 Joseph Wenninger was born the second of eight children on October 31, 1919, to Henry and Josephine (Weber) Wenninger in Park Falls, Wisconsin. Joseph attended the local Catholic grade school of St. Anthony. At a young age Joseph expressed a desire to become a priest and on the advice of two cousins, Joseph entered Saint John’s Preparatory School in the fall of 1933 and graduated in 1937. During vacations and summers Joseph would also help his father in the family bakery business.

After attending two years of college at Saint John’s University from 1937-1939, Joseph entered the novitiate of Saint John’s Abbey and received the name Magnus. After making his first profession of vows as a Benedictine monk on July 11, 1940, Magnus completed his last two years of college earning a Bachelor of Arts degree in Philosophy. He then began his four years of theological training at Saint John’s Seminary and was ordained to the priesthood on September 2, 1945.

After his ordination, Abbot Alcuin Deutsch, OSB, informed Magnus that he was being assigned to teach in the newly founded Saint Augustine’s College in the Bahamas and to live in Saint Augustine’s Monastery in Nassau. Before going to Nassau, Father Magnus was sent to the University of Ottawa in Canada, where in nine months he earned a Master of Arts degree in Philosophy with a dissertation on “The Concept of Number According to Roger Bacon and Albert the Great”. Magnus became a mathematics teacher at Saint Augustine’s College from 1946 to 1971. From 1971 to 1981 he was the comptroller and accountant for Saint Augustine’s College. While in the Bahamas, Father Magnus was also chaplain to Her Majesty’s Prison from 1950 to 1958 and spiritual director for the Legion of Mary for the Nassau Curia from 1953 to 1974. He also did extensive weekend pastoral assistance to the various parishes in Nassau and the Bahama family islands from 1958 to 1981.

Between 1958 and 1961, Father Magnus attended four summer sessions at Columbia University Teacher’s College in New York, earning a Master of Arts degree in Mathematics Education in 1961. It was during his mathematic studies that Magnus became fascinated with all forms of polyhedrons. Polyhedrons, meaning “many sides” are three-dimensional geometric figures which are both mathematically intricate and aesthetically appealing. As tools for understanding arrangements in space, they are useful in geometry, engineering, architecture, and chemistry. Since 1960 Magus authored articles and books on the subject. Father Magnus’s books include Polyhedron Models for the Classroom (1966, revised in 1975); Polyhedron Models (1971) which was translated into Russian and Japanese; Spherical Models (1979, 1999); and Dual Models (1983). Father Magnus considered the polyhedron models his special contribution to the field, since he was the first to show how to make models of all seventy-five so-called uniform polyhedra. Professor Skilling of Cambridge University confirmed that number in his research.

Father Magnus, “The Polyhedra Padre”, became a recognized authority in the field and spent countless hours creating models of polyhedral shapes made out of colorful paper and glue. He wedded mathematics to art in his work. Professor Arthur Loeb of Harvard University said of him: “The beauty of Magnus Wenninger’s models is beyond doubt. And once these attractive models become prevalent they are bound to influence environmental art and architecture and thus have a positive effect on our visual environment.”

These are among Father Magnus’ honors: in June 2006 the StudySphere.com Editorial Team selected his website as “one of the best educational resources on the Web”; a Lifetime Achievement Award from the Special Interest Group on Mathematics and the Arts of the Mathematical Association of America with the dedication of the “Exhibition of Mathematical Art” in honor of Father Magnus at their joint mathematics meeting in January 2008.

In 1981 Father Magnus returned to Saint John’s Abbey to become accountant for The Liturgical Press until 1987. He continued to do weekend pastoral ministry as needed and served on the chaplain teams for Saint Raphael Convent (1986-1999) and Saint Benedict’s Monastery (1989-1993). For nine years Father Magnus was the Director of Oblates of Saint John’s Abbey, writing and publishing a monthly newsletter for all the oblates. In his retirement, he continued to work endless hours creating beautiful polyhedra which he would sell at the Abbey Gift Shop and at various art fairs in the local area.

We ask each community member to offer two Masses according to the manner of his participation in the priesthood of Christ. We commend our brother, Magnus, to your prayers.