THE CONSTIUTION COMMITTEE IS ANNOUNCED 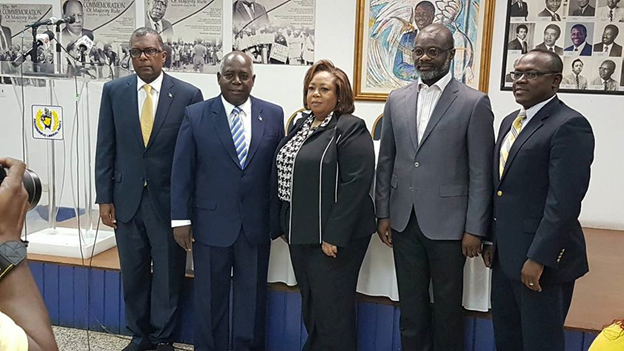 Statement by
Leader of the Progressive Liberal Party
Philip Brave Davis MP QC
21 November 2017
Announcement of The Constitution Committee
Gambier House
CHECK AGAINST DELIVERY
Good morning:
Today I wish to announce the Constitution Committee has been appointed. It is headed by former Chairman Raynard Rigby who is an Attorney At Law. Its Deputy Chair is Attorney Jacqueline Simmons.
The Committee is a standing committee of the party and it is tasked with reviewing the recommendations for amending the constitution and reporting back to the National General Council and then either the Annual Convention or a Special Convention called for that purpose. I hope to get the recommendations by June of 2018.
Some 64 years ago in November 1953 William Cartwright, Cyril Stevenson, and Henry Milton Taylor constituted the framework of a political organization that defined the social, economic and political movement of a party that engraved its efforts in the fight towards independence and majority rule. The preamble of the PLP’s Constitution reminds us that we are the beacon of hope for our Commonwealth, the defenders against injustices, and the promoters of improving the lives of people and the downtrodden while offering a future of promise to our young people.

It was that document that became the instrument that governed the external and internal affairs of the Progressive Liberal Party outlining the objective of a movement by the people striving for economic independence and empowerment. It was those objectives written in our constitution that went beyond organizing and maintaining the House of Assembly as the government of the day but also providing security and dignity to the less fortunate.

At critical junctures in our party’s history, we have rebranded, retooled and refreshed ourselves. The loss of 10 May 2017 and the subsequent National General Convention of the October 2017 present such opportunities. The party has undergone a series of analytical reviews. We hope to be able to share with the public some of those recommendations, once our internal procedures are done. In the meantime, however, work has begun.

You may remember prior to the National General Convention that there was a number of far reaching recommendations made by various members of the party to amend the constitution so that the party’s structures could more accurately reflect that of the contemporary Bahamas. The previous Committee indicated that they needed more time to traverse The Bahamas, to define the contributions and make the necessary recommendations. To that end, we announce that the work will continues.

The Members of the Committee are individuals with diverse backgrounds, unique talents and complementary strengths. I believe they mirror the varying democratic desires and best practices that the Bahamian people would wish to see in a contemporary political party. They are charged with the responsibility of strengthening our democratic process and revisiting areas of our constitution’s infrastructural mechanisms to ensure that we remain relevant to the times.

The Constitution Committee is expected to ensure that synergies are maintained between party supporters and that their considerations are integrated into the process. Meaningful and tangible reform is required to renew a sense of trust and credibility against the backdrop of an electorate who are often deeply cynical about the political process.

I have no doubt that the reform process will embrace the values of diversity, inclusion, and good governance. Today’s announcement signals a shared understanding that reform is essential to remain relevant to the times and to connect to the Bahamian electorate.

PrevPreviousSIR ARLINGTON IS BURIED
NextTHE WORK OF THE MISSIONS ABROADNext