THE FNM IS INVOLVED IN A CRIMINAL CONSPIRACY 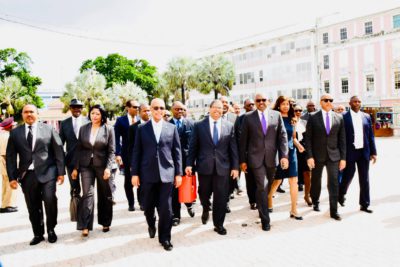 The Leader of The Opposition Philip Davis has called for a Commission of Inquiry to look into the conduct of the Government with regard to the prosecutions of PLPs now before the courts on alleged cases of corruption. These cases aren’t worth the paper that they are written on. The affidavit of Shane Gibson which was filed on Thursday 16 August shows a pattern of conduct by the state which is criminal in nature. This must be exposed and brought to heel.

It has been more than 48 hours since these shocking revelations were made that the witnesses were tampered with by agents of the state.  When you read the transcripts and hear the tapes, it is clear that this a political witch hunt and that there is a cavalier attitude toward the responsibilities of these officers and the witnesses about the matter which seriously affects the reputations of former leaders of this country.

The PLPs narrative since the general election had been that the removal of the PLP from power was engineered by Fred Smith, Save The Bays and monies supplies by a foreign billionaire through Fred Smith to destabilize the government.  That needs to be investigated.

The FNM came to power on the backs of that expenditure.  Now we see that their agenda is to keep the PLP out of power by suggesting that there is corruption but from what the affidavit reveals, it is clear that the corruption is actually in the FNM. This is the most crooked government we have ever had.  They are stealing in plain sight.

We hope that the country is outraged by this criminal conduct on the part of the Minnis administration.  We hope that those PLPs that were doubting now see the nature of the beast with which they dealing in this FNM crew.  They are crooked as a corkscrew.

In the meantime, people are not working.  People cannot get food from social services.  People in Grand Bahama, wonder what the heck these folk plan to do.  They have announced that they are going to spend 65 million to but a hotel but no plan after that.

Hubert Minnis and the crooked FNM must resign.