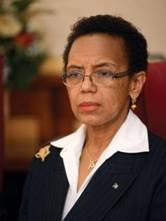 From the beginning of this project, the Government of The Bahamas has sought to facilitate an impartial process that results in the opening of Baha Mar, under private ownership and operation as soon as possible. It is without question in our national interest to do so.

Baha Mar’s statement today is entirely misleading. As a matter of policy, our Government has sought to create a fair playing field for the development. We have pursued this objective in three ways.

First, by encouraging and facilitating ongoing talks between all parties to seek an agreement out of court and, when appropriate, joining those talks, both in Nassau and in Beijing;

Second, by paying the wages and salaries of Bahamian employees that Baha Mar failed to pay;

Third, as a precaution and in order to protect our national interest, we have taken steps to assure that if the fate of the Baha Mar project has to be determined through court proceedings, those proceedings occur in The Bahamas, not in the United States.

Notwithstanding this precautionary stance, we also acknowledged today that agents for Baha Mar, the China Export and Import Bank and China State Construction reported that as recently as 6:00 pm last night, progress was being made on an out of court settlement.

A postponement of today’s hearing was advisable if only to encourage the agreement towards which the parties appear to be progressing.

Should Baha Mar Ltd., the Export-Import Bank of China, and China Construction America be unable to resolve their dispute, however, appointing a provisional liquidator would allow all parties a mechanism for fair, independent, third-party restructuring, completion and opening of the resort.

As such, it has always been understood that a liquidator must be entirely free of conflicts of interest in order to be appointed. Under a liquidation scenario, this is the only way to ensure the fairness and balance we seek.

The Government makes no apologies for ensuring that the third-party liquidator under consideration by the court is free of any real or perceived conflict of interest.

In the interest of ensuring a fair outcome for all parties, the Government asked the Supreme Court to postpone until a new independent, third-party liquidator who is free of conflict, can be nominated.