THE HURRICANE IRMA SACRES THE BEJESUS OUT OF US 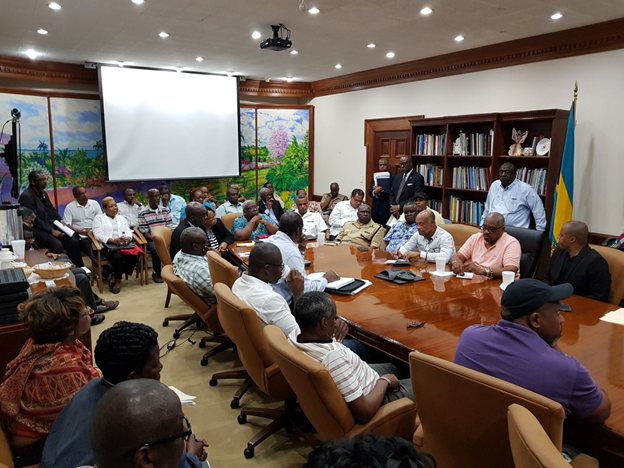 There is the hurricane. It has certain physical elements. The wind speed. The howls of the wind. The surge of the tide. The full moon maybe. The rain. The floods. Those facts are bad enough. But in the modern era there is something else at work.

In the pre-Columbian days, the Arawaks, Tainos, Lucayans simply sat and accepted the weather. They knew about hurricanes because the word we are told comes from their language. Presumably they knew how to survive them because they were here at the time Columbus stumbled upon the beach in Watlings.

In this modern era though there is another thing at work that creates more fear than the event itself. Panic even. That is the media coverage and the television tracking of the satellite images. The storms are given names, so people think of them as personalities. The American and other media of course milk this for the great entertainment that it is. Just think of the irony of the reporters telling you to stay out of the high winds, rain and flood waters but they are there in the very thing that they say is so dangerous.

The people are glued to the television sets, the chat groups, Facebook and Instagram. Where is the storm now? Where is it going to turn next? Each person predicting where the storm is going to turn. It’s not coming to The Bahamas. The prayer warriors are busy and they are saying it should go to Cuba, as if the Cuban people don’t need to be spared the wrath of God.

One wife warned her husband to put the bloody computer down and stop obsessing over the storm and simply go to sleep.

The panic was huge even in the technologically equipped United States. The Miami Airport was like a zoo with people running up and down. Fights schedules being cancelled. It was like ants who suspect that flooding is coming, people en masse were running away from the storm.

After the scenes of Hurricane Harvey in Texas and all the flooding; in The Bahamas after the scenes of devastation of Joaquim and Matthew and before that Wilma, Francis, Michelle and Jean, no one was taking any chances and people wanted to get the hell out of dodge. The FNM Government obliged them airlifting them to Nassau from Inagua, Mayaguana, Acklins, Crooked, Ragged, Long and Bimini. The capital was crowded with folks running from the storm.

They had also seen the devastation in St John, Tortola, Barbuda, and St Martin. This was not play-play.

Our point here though is that the coverage is overkill. It unnecessarily panics people. It’s serious but not a cause for panic. We live in a bloody hurricane zone. These things happen. If we would all invest in proper buildings and enforce the building codes, there would be no reason to be concerned at all about hurricanes.

Well we dodged a bullet this time again. Dr. Hubert Minnis and his FNM government would like to take credit for it. They had nothing to do with it. The public servants actually keep the thing going and nature does the rest. Minnis and his crew are just here for the ride and to shamelessly take advantage of the good publicity which makes them seem like miracle workers instead of the crude bozos that they are.

Of course the PLP did the same thing that this crew is doing. They did for Hurricane Matthew last year. As we know, the PLP lost the election and lost badly. What’s the lesson in that?