THE SLASHING AND BURINING CONTINUES 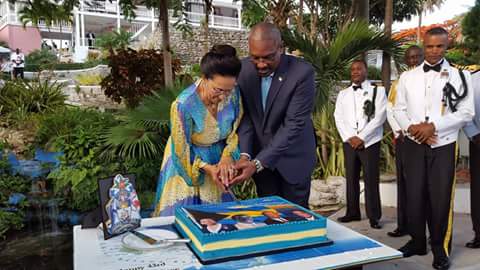 This photograph was taken by Dr. Hubert Minnis’ personal staff and circulated around the country. It could only have been meant to embarrass the Governor General. The down market gossip newspaper The Punch had a field day the day after independence by suggesting that the Prime Minister was furious because he was left out of the cake cutting. Indeed he was both furious and left out of the cake cutting.

But here’s the thing. It should never have happened. All the public officials who were there from top to bottom knew that what was happening was wrong and were so swamped it seems by propriety, the moment and protocol that no one thought to just stop and get the Prime Minister to where he was supposed to be. He was in the holding room upstairs.

The official inquiries and recollections and changes to protocol and directions will in due course be made but we have to ask the Leader of the Opposition Dr Hubert Minnis if he really thought he ought to have gone ahead without the Prime Minister present. You have to ask yourself would the Prime Minister Perry Christie have taken that cheap shot and cheap advantage and gone ahead and taken a picture with the Governor General without Leader of the Opposition present, knowing that the Prime Minister was right upstairs in the drawing room where he left him?

The Prime Minister would not have done it. But that is the morality of this new generation of politicians. They have none.

This is what we call a cheap shot. It is worrying feature of Dr. Minnis and the way he conducts business. He goes to a funeral and does not know what to say in the face of an event which is not political. Despite all that Leslie Miller says about him being a common man’s friend, The Bahamas does not like common conduct. There is a standard which the Leader of the Opposition, our potential Prime Minister is to exercise. Not to be boorish and taking cheap shots which get you nowhere.

As we said, all the officials should have known better. But the Leader of the Opposition could well have stood tall by saying: “No Madam, we should find the Prime Minister and await his coming to cut the cake.”

Instead he didn’t. He ran up, snapped the shot and then spread it throughout the country to the embarrassment of the Governor General.

The FNM is about to choose him for Leader. What he did at Government House was an unbecoming that act. We think that Loretta Butler Turner has run a bad campaign; should not be leader of the FNM because of her temperament and worst of all because she the granddaughter of Milo Butler our Black champion and the first Bahamian Governor General seems now beholden to the racist Bay Street element of the FNM which includes Richard Lightbourn and Brent Symonette.

These people are clueless and live in the past. She has what many call a set of super Toms that is Uncle Toms with a capital T, supporting her. The main one is Duane Sands who in Saturday’s Guardian was a bloody apologist for Brent Symonette. Another is Richard Lightbourn the FNM MP who said that The Bahamas is not ready for a University of The Bahamas and we cannot compete at the world level.