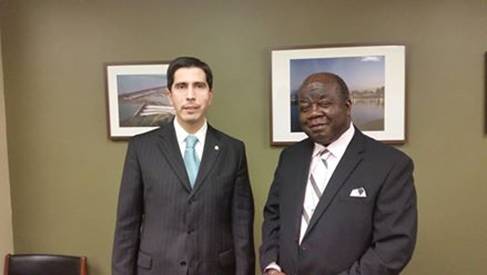 viagra buy health times;”>NEW YORK —ampoule times;”> His Excellency Dr. Elliston Rahming (right), Ambassador and Permanent Representative of The Bahamas to the United Nations and the Organisation of American States, paid a courtesy call on Tuesday, April 21, 2015, on the Ambassador and Permanent Representative of Paraguay to the United Nations, H.E. Mr. Federico Alberto González Franco (left), as part of the Mission’s efforts to garner support among UN Member States for The Bahamas’ re-election to Category ‘C’ of the Council of the International Maritime Organisation, for which elections will take place in November of this year. Ambassador Rahming also met on Tuesday with the Ambassador and Permanent Representative of Uruguay to the United Nations as part of these ongoing efforts. 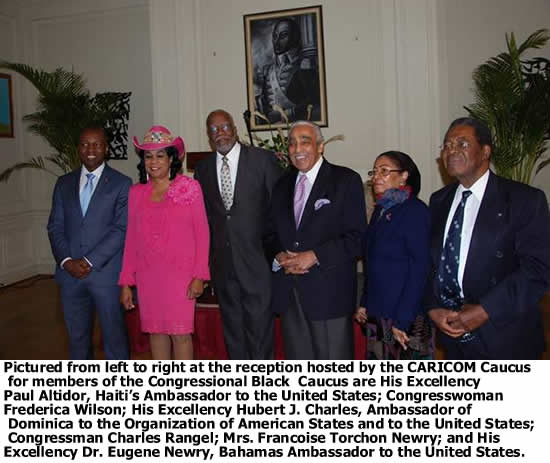 WASHINGTON, D.C. — In his capacity as chairman of the CARICOM Caucus, His Excellency Dr. Eugene Newry, Bahamas Ambassador to the United States, along with His Excellency Paul Altidor, Haiti’s Ambassador to the United States, and ambassadors for other CARICOM-member countries hosted a reception on Tuesday, April 21, 2015, for members of the Congressional Black Caucus (CBC) at the Embassy of Haiti, 2311 Massachusetts Avenue, N.W.

Guests were welcomed by Ambassador Newry, who noted that members of the CBC have been the “best advocates” in Congress over the years for CARICOM countries.

“Over the years we have been able to forge a relationship that produced tangible results that have been beneficial to our region,” Dr. Newry said.

Ambassador Altidor also gave welcoming remarks, followed by brief remarks by legendary Congressman Charles Rangel, a founding member of the Congressional Black Caucus, who is now serving his 23rd term in Congress as the Representative for New York’s 13th District.

Congressman Rangel described the reception as “something that is so important to all of us.”

“Whatever problems we have, we have a culture that we share with each other,” he said, adding that during his recent meeting with CARICOM leaders in Jamaica, “our great President Barack Obama put forth some good ideas that we can work on.”

She noted that she is very proud of the fact that she has Bahamian heritage.

NEW YORK — The Hon. Forrester J. Carroll, Bahamas Consul General to New York, attended an exhibition on Friday, April 24, 2015, at the Kazakhstan Mission to the United Nations. Entitled “ATOM PROJECT: Abolish Testing Our Mission,” the exhibition was hosted by Ambassador Kairat Abdrakhmanov, Permanent Representative of Kazakhstan to the United Nations. It was organized by armless Kazakh painter Karipbek Kuyukov, Honorary Ambassador of the ATOM Project and Nuclear Tests survivor, and held in conjunction with “BIKE AWAY THE ATOMIC BOMB” to commemorate the final part of the “Washington DC – New York” bike ride event, devoted to raising awareness of the horrors and dangers of nuclear weapons testing, organized by “THE ATOM Project”, “Mayors for Peace” and “Bike for Peace.” Pictured from left are Mr Svein Arne Jerstad, Mayor of Kvinesdal, Norway; Consul General Carroll; Ms. Raushan Yesbulatova, Consul General of Kazakhstan to New York; Ambassador Abdrakhmanov; and Mr Thore Vestby, Vice President, Mayors for Peace. 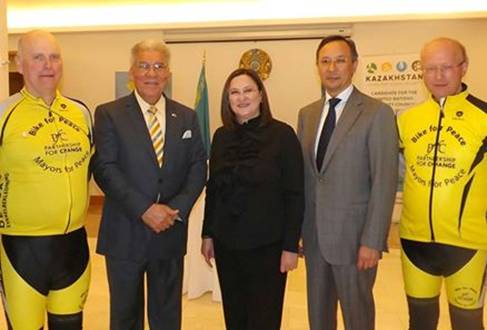