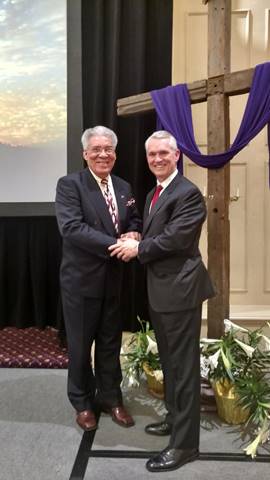 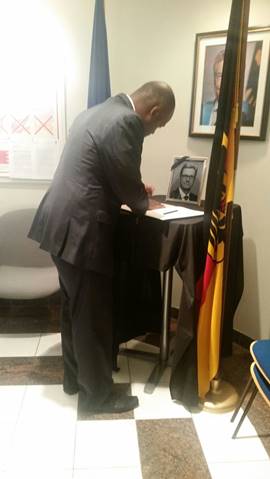 ATLANTA, Georgia — Bahamas Consul General to Atlanta Randy Rolle signs the Book of Condolences on Wednesday, March 23, 2016, at the German Consulate General in Atlanta for former German Foreign Minister Dr. Guido Westerwelle, who died on Friday, March 18, at the age of 54. 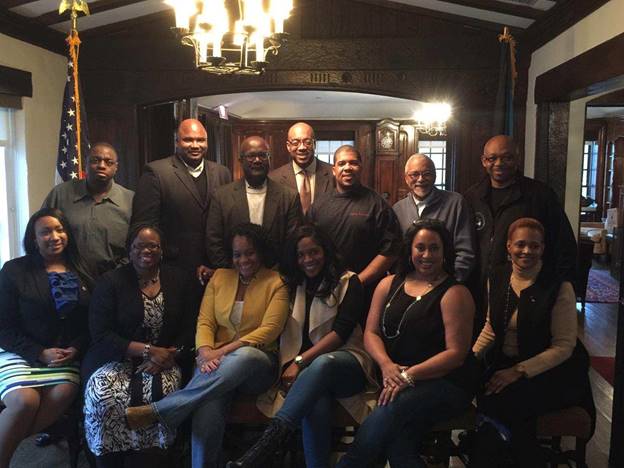 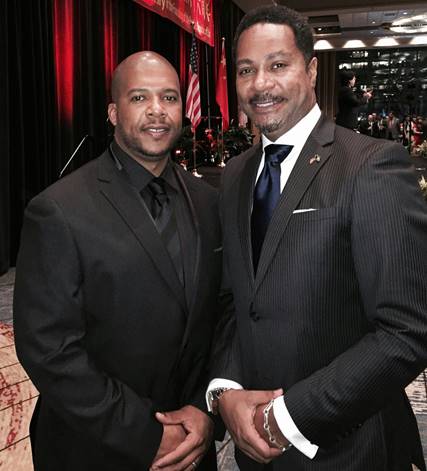 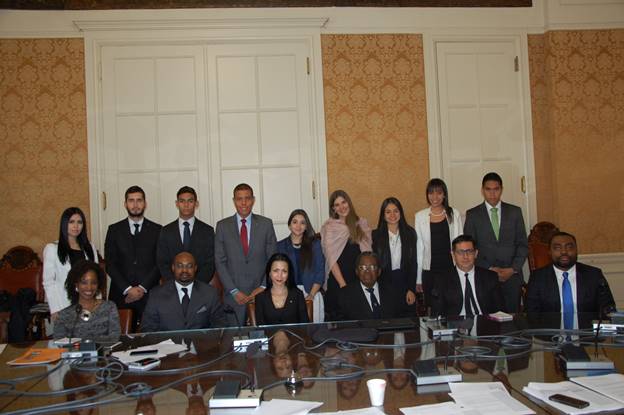 WASHINGTON, D.C. — Nine students and two professors from the Pontifical Bolivarian University in Medellin, Colombia, were briefed by Ambassador Dr. Eugene Newry and other staff of the Permanent Mission of The Bahamas to the OAS on Bahamian economic affairs, foreign policy and the role of The Bahamas in the OAS on Monday, March 21, 2016.

The students are representing The Bahamas in the 2016 Washington DC Model of the OAS General Assembly for Universities, which is being held from March 21-25, 2016.  Deputy Chief of Mission Chet Neymour, Second Secretary Krissy Hanna and Second Secretary Mikhail Bullard also participated in the briefing that was held in the Miranda Room at the OAS headquarters, 17th Street and Constitution Avenue, N.W.

When wrapping-up, Ambassador Dr. Newry reiterated the hope that the students would enjoy the experience of learning about and representing The Bahamas and encouraged them to use the OAS simulation to think about the linkages between Latin America and the Caribbean Basin. He also encouraged the students to continue to remain interested in international public and foreign policy formulation as they consider future careers.

The Pontifical Bolivarian University (Spanish: Universidad Pontificia Bolivariana), also referred to as UPB, is a private university in Colombia with its main campus in Medellin, where it was founded in 1936. Currently, the university has campuses in other Colombian cities, such as Bogotá, Bucaramanga, Monteria and Palmira.

CAPTION
After a briefing session held in one of the conference rooms of the OAS, students from the Pontifical Bolivarian University are pictured standing behind Bahamas Ambassador Dr. Eugene Newry and other staff of the Permanent Mission of The Bahamas to the OAS and two of their professors. Seated from left to right are Second Secretary Krissy Hanna, Deputy Chief of Mission Chet Neymour, Professor Tatiana Velez, Ambassador Newry, and Professor Olmer Munoz. 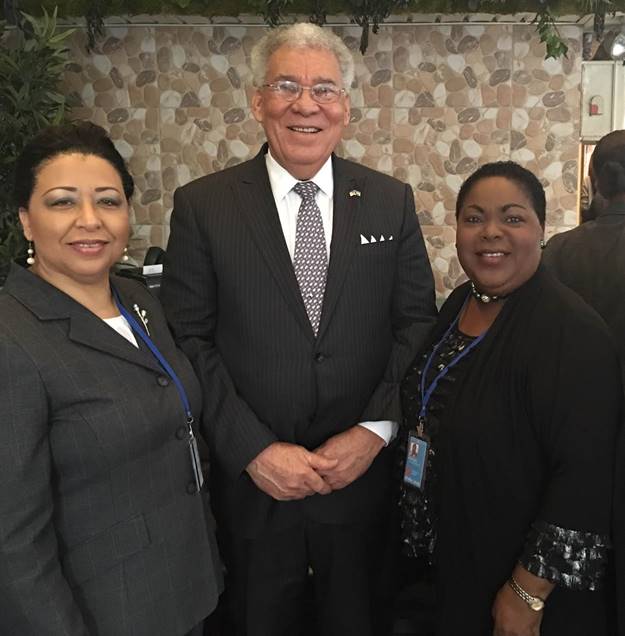 NEW YORK — Hon. Forrester J. Carroll, Bahamas Consul General to New York, attended a reception hosted by H.E. Dr. Elliston Rahming, Bahamas Ambassador to the United Nations and the Organization of American States (OAS), on Friday, March 18, 2016, at Alibaba Restaurant, 862 Second Avenue, for Bahamian delegates attending the sixtieth session of the Commission on the Status of Women (CSW 60) at the United Nations Headquarters. The reception followed a side event panel on “Gender Based Violence in the Caribbean: A Cause of Concern and Time for Action.”  Pictured from left to right at the reception are Acting Justice of the Bahamas Supreme Court Petra M. Hanna-Weekes, Regional Vice President of the International Federation of Women Lawyers (FIDA); Consul General Carroll; and Mrs. Jethlyn Burrows, President of the International Federation of Women Lawyers (FIDA). 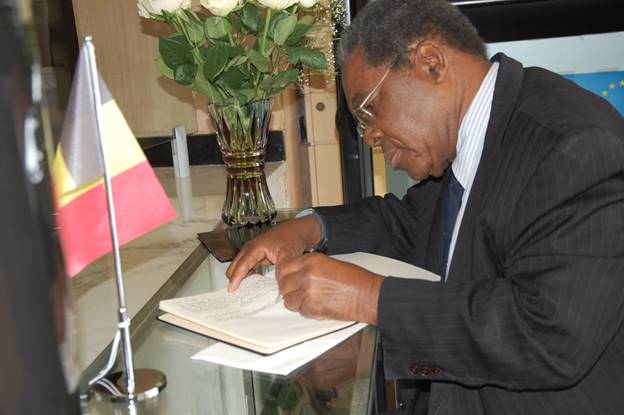 WASHINGTON, D.C. — His Excellency Dr. Eugene Newry, Bahamas Ambassador to the United States, is pictured signing the Book of Condolences on Wednesday, March 23, at the Embassy of the Kingdom of Belgium, 3330 Garfield Street, N.W., as a tribute to the victims of the terrorist attacks in Brussels on March 22, 2016. In the aftermath of this tragedy, the Belgian government has declared three days of national mourning. 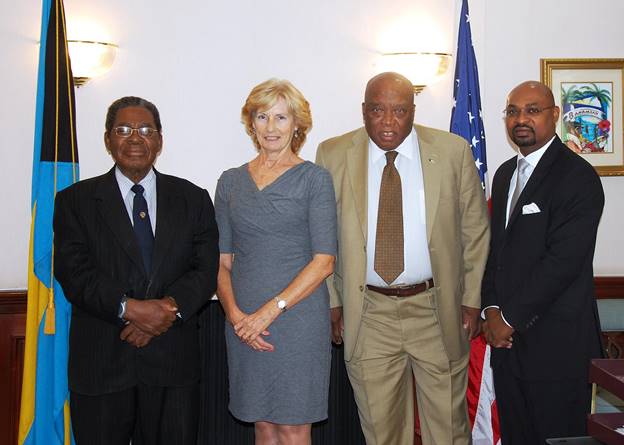 WASHINGTON, D.C. — My fiancée Elisabeth Ann Hillman paid a courtesy call on His Excellency Dr. Eugene Newry, Bahamas Ambassador to the United States, on Wednesday, March 23, 2016, at the Embassy of The Bahamas, 2220 Massachusetts Avenue, N.W. I usually take the pictures on occasions like this, but I had to get in on this photo, which was taken by the Ambassador’s secretary, Mrs. Vernell Thomas. Pictured from left to right: Ambassador Newry; Elisabeth; Mr. Oswald T. Brown, Press, Cultural Affairs and Information Manager; and Mr. Chet Neymour, Deputy Chief of Mission. 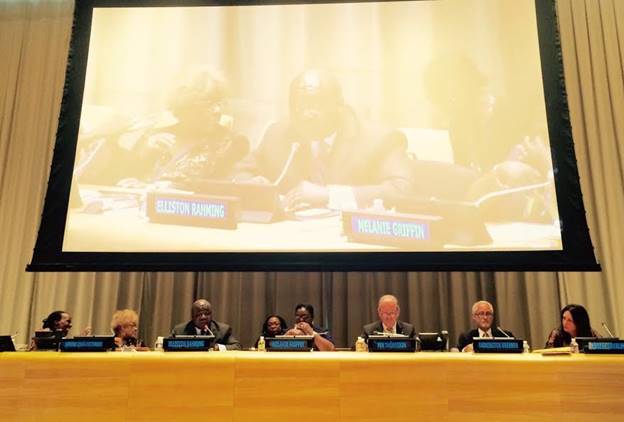 NEW YORK — The Bahamas Mission to the United Nations, in cooperation with the Permanent Missions of Jamaica and Sweden, on Friday, March 18, 2016, hosted a Side Event on the occasion of the Sixtieth Session on the Commission on the Status of Women. Some 200 persons attended the event. Entitled “Gender-Based Violence in the Caribbean: A Cause of Concern and a Time for Action,” the event featured participation from several experts, including, the Honourable Melanie Griffin, Minister for Social Services and Community Development; Dr. Sandra Dean-Patterson, Director, The Bahamas Crisis Centre; Mr. Barrington Brennen, Co-Founder and Co-President, Sounds of Encouragement Counseling, and Media Association); and Dr. Rosina Wiltshire, CARICOM Advocate for Gender. CAPTIONShown from left are: Dr. Rosalina Wiltshire, CARICOM Gender Advocate; Dr. Sandra Dean-Patterson, Director, The Bahamas Crisis Centre;  H.E. Dr. Elliston Rahming, Bahamas Permanent Representative to the U.N. and the Organization of American  States (OAS); the Hon. Melanie Griffin, Minister of Social Services and Community Development; Mr. Per Thoresson, Ambassador and Deputy Permanent Representative of the Permanent Mission of Sweden; Mr. Barrington Brennen of The Bahamas; and UN Women Regional Director, Mrs. Luiza Carvalho. 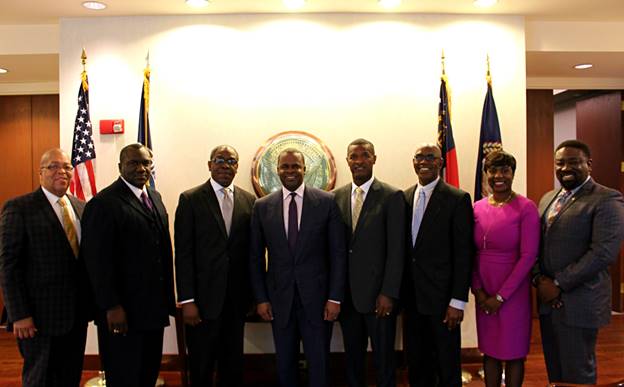 ATLANTA, Georgia — With the high rate of crime currently a major area of concern in The Bahamas, during a courtesy call on Atlanta MayorKaseem Reed on Tuesday, March 22, 2016, a delegation of religious leaders from Nassau expressed an interest in learning more about what the City of Atlanta does in regard to youth programs in order to provide at-risk youth tools to thrive and not turn to crime.

Mayor Reed discussed the different initiatives he has undertaken as Mayor of the City of Atlanta to support youth that have resulted in teen crime being down 25% and high school graduation increasing by 15% since 2010.

He stressed that the faith community was particularly well positioned to take an active role in supporting youth initiatives.

The Atlanta Mayor also pointed out that not all religious institutions are equipped to undertake the types of programs he mentioned, so it was important to select churches that have a good track record in implementing such programs as well as the internal resources to do so.

He said he would be happy to pursue the sharing of best practices with The Bahamas moving forward.

The two-day visit to Atlanta by the Bahamian religious leaders is an offshoot of an  official visit to The Bahamas last August by Mayor Reed at the invitation of the Hon. Fred Mitchell, Minister of Foreign Affairs and Immigration.

They arrived in Atlanta Monday night and following their courtesy call on Mayor Reed Tuesday morning, that afternoon they paid a courtesy call on Dr. Barbara King at her Hillside Chapel & Truth Centre on Cascade Road, S.W

The delegation was scheduled to return to The Bahamas on Thursday.

PrevPreviousROLLINS: A PROFILE IN HOW TO BE UNCOURAGEOUS
NextTHIS WEEK IN THE BAHAMAS (21 MARCH TO 25 MARCH)Next