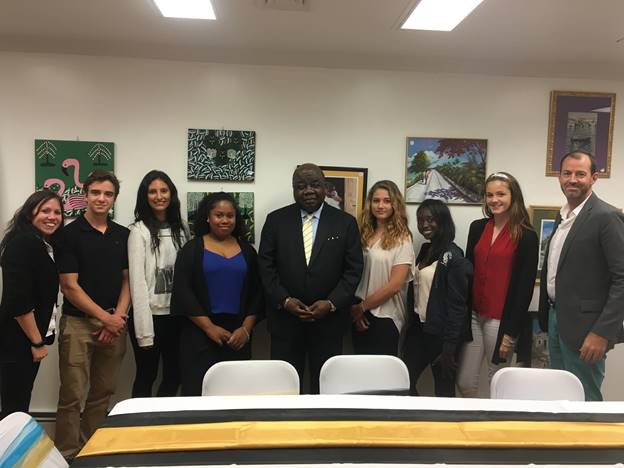 NEW YORK — His Excellency Dr. Elliston Rahming (centre), Bahamas Ambassador to the United Nations and the Organization of American States (OAS), is pictured with a group of teachers and students from St. Andrews International School in Nassau on Tuesday, May 3, during their visit to New York. Ms. Vicky Morgan (far left), Head of Department for Global Issues and Social Studies, and Mr. Gordon McKenzie (far right), Head of English, accompanied the six senior high school students on the New York trip, which included a visit to the United Nations. Ambassador Rahming hosted a luncheon for the group and organised a tour of UN grounds for them. 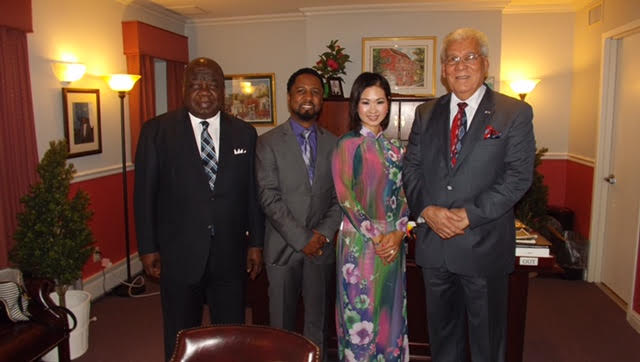 NEW YORK — For the past nine years. J.U.M.P. Ministries Global Church (JMGC), a part of J.U.M.P. Ministries Missions, a holistic Gospel Outreach Ministry addressing the needs of the whole man, annually has held a variety of free events featuring tasty dishes from countries round the world in the area of its home church in Orlando, Florida.

Headquartered at 2550 West Colonial Drive, Suite 300, Orlando, JMGC is headed by Grand Bahama native Dr. Durone Hepburn and his wife Lady Phuong, and according to Dr. Hepburn, the Ministry is “especially focused on the outcasts and dispossessed of society, addressing their needs, both physical and spiritual, and bringing real relief to their dire situations.”

For its tenth annual event, the Ministry has decided to go international and, according Dr. Hepburn, there is “no better place to start internationally than in the founder’s birthplace of Freeport, Grand Bahama.”

The Grand Bahama event is slated for Freeport, on July 30, 2016, when a JUMP “team along with hundreds of visitors and participants will descend on Grand Bahama bringing an international smorgasbord of foods, drinks and giveaways for the people of Grand Bahama.”

According to the organizers, “a brand new car will be given away free, as well, to the lucky winner during the event.”

During a visit to New York, Dr. Hepburn and Lady Hepburn gave a briefing on the event to His Excellency Dr. Elliston Rahming, Bahamas Ambassador to the United States and the Organization of American States (OAS), and the Hon. Forrester Carroll, Bahamas Consul General to New York, during a courtesy call on the two Bahamian diplomats at Bahamas House, 231 East 46th. Street, on Monday, May 2, 2016.